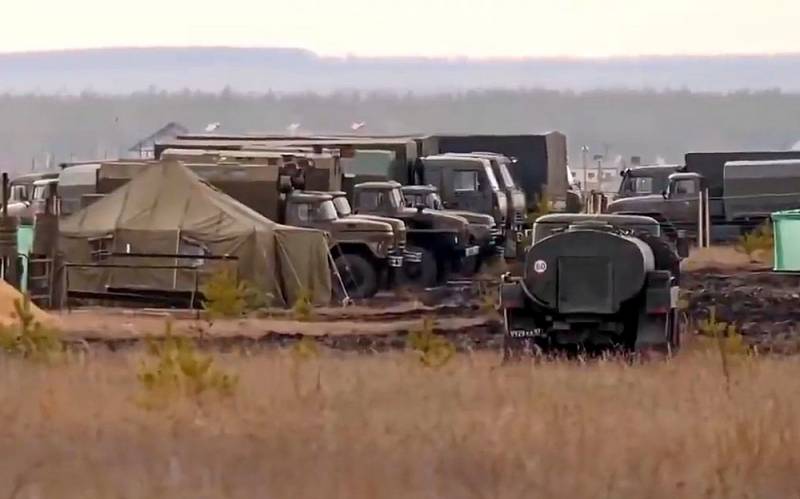 The day before, Russian Defense Minister Sergei Shoigu said that the military exercises, for which our troops were drawn to the western border, have been successfully completed, and therefore they can return to their places of permanent deployment. What was that, bluff? If so, from whose side: Kiev, which threatened to resolve the problem of the DPR and LPR by force, or the Kremlin, which promised to protect them by military means, right up to the invasion? Who beat whom, and should we expect a full-scale Russian-Ukrainian war at all?


Let us remind you that the aggravation in Donbass began several months ago, and its intensity was constantly growing. The Armed Forces of Ukraine were actively pulling towards the contact line, where two shock fists were formed, aimed at Donetsk and Lugansk. The alignment of forces is such that the local militia would definitely not have been able to withstand the large-scale offensive of the Ukrainian army. But why did Kiev need the beginning of real hostilities?

Probably, President Zelensky wanted to achieve a solution to several problems at once. First, any advance with the seizure of a part of the territory of the DPR and LPR according to the “Karabakh scenario” would be proclaimed a “great change” and his personal triumph. This would definitely add points in the eyes of the hurray-patriotic public of Nezalezhnaya Vladimir Alexandrovich. Secondly, the young and ambitious head of state was clearly burdened by the fact that the curators of the "Maidan project" in the person of the US Democratic Party defiantly ignored him.

Now for the second side of the conflict. Since the DPR and LPR on their own would not have stood against the Armed Forces of Ukraine, Moscow, as a guarantor of the security of the unrecognized republics, began demonstratively transferring its troops to the Ukrainian border. According to various estimates, several shock fists with a total strength of 110 to 150 thousand people were concentrated there. Echelons with armored vehicles from Central Russia were going, ships of the Baltic Fleet and the Caspian Flotilla began to move to the waters of the Black and Azov Seas. Potential directions for strikes by the RF Armed Forces from the east, north-east and south of Ukraine emerged as a response to the aggression of the Armed Forces of Ukraine against Donbass.

But why does the Kremlin need all this? The question is extremely controversial, since Russia in any case would be "extreme".

On the one handUnfortunately, war is the only real way to solve the problem with Ukraine as a hostile state. You can wait until she falls apart or comes to her senses and crawls back on her knees to ask for forgiveness at least until the end of time. It just won't happen. Today and henceforth, Nezalezhnaya is officially AntiRussia, a hostile country in the neighborhood, with an army of 250 people and the ability to commit various provocations. Its population is inclined towards anti-Russian propaganda, the young generation is being brought up right now by real Russophobes. Thus, in 2014, a colossal geopolitical problem was created, which is not being solved in any way and is only aggravated from year to year. War and only war, direct or "hybrid", can cut this knot of contradictions.

On the other hand, the use of force to resolve the problem will have a very high price for both Russia and Ukraine. These are significant human casualties on both sides, and tough Western sanctions, which will undoubtedly be imposed against us. There will be problems with the disloyalty of the local population and possible partisanship, etc. For our country, it is quite possible that a large-scale counteroffensive deep into Ukrainian territory could end in international isolation. Such is the "fork" it turns out.

And, judging by a number of statements by high-ranking Russian officials, the Kremlin is completely unprepared for such a scenario. The maximum is to preserve the status quo, that is, not to allow the Armed Forces of Ukraine to defeat the DPR and LPR by military means, for which the Russian Armed Forces were pulled to the western border of Russia. Variants with amphibious assault on Mariupol and Odessa or with a march on Kharkov, apparently, were considered by the General Staff of the Russian Federation, but only as "plan B". Both sides raised the stakes, and everyone was forced to reveal themselves by communication with US President Joe Biden. What is the result of this "standing" of the Ukrainian and Russian armies?

The Ukrainian Armed Forces did not attack, but they didn’t retreat anywhere either, but proceeded to reinforce their entrenchment to defend against a possible counteroffensive by the Russian Armed Forces. Volodymyr Zelenskyy still managed to get in touch with the American president. It is quite possible that now Kiev will be asking NATO to deepen military cooperation with Independent, pointing out the need to confront Moscow.

The head of the Russian Defense Ministry issued an order to withdraw troops from the western border. True, reportedly combat technique Of the 41st Army of the Central Military District, the whole remained in place. At the Pogonovo training ground, she will await the large-scale military exercises Zapad-2021, which are to take place in September this year. In other words, in the event of aggression by the Ukrainian army against the unrecognized republics of Donbass, the Russian army will be able to quickly deploy within a few days. The Kremlin received a short delay, which it will obviously try to use to complete the construction of the Nord Stream 2 gas pipeline bypassing Nezalezhnaya. According to optimistic forecasts, this may happen before the end of the summer of 2021.

Thus, the war is simply postponed for some time, but, alas, it will not work to evade it endlessly, since the objective reasons leading to it have not been eliminated. The opposing sides will continue to prepare for it more seriously, and therefore it will be even more fierce.
Ctrl Enter
Noticed oshЫbku Highlight text and press. Ctrl + Enter
We are
Ukraine from the inside: traitors, curators and those who watch from the Kremlin
Ten "defeats" of Putin
Reporterin Yandex News
Read Reporterin Google News
11 comments
Information
Dear reader, to leave comments on the publication, you must sign in.