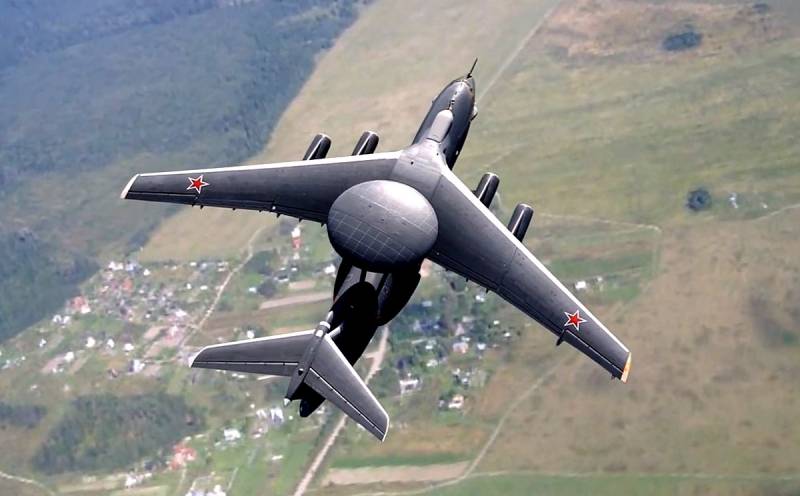 Today we are forced to live in the era of a new "Cold War", which the collective West has again begun to actively wage against Russia. All this is done according to the precepts of the ideologue of Hitler's propaganda of the Third Reich, Joseph Goebbels: the more monstrous the lie, the easier it is to believe in it. "Behind the hill" are riveted "on their knees" extremely dubious stories about "chemical weapons poisoning" and "explosions of ammunition depots", which ultimately do not find any convincing evidence, but become a reason for cooling political relations with Moscow and the introduction of anti-Russian sanctions. A frank fake about how the Russian DLRO A-100 plane allegedly invaded the skies over Ukraine was made according to the same patterns.


According to the specialized web service Flightradar24, the Russian A-100 Premier AWACS aircraft allegedly entered the Nezalezhnaya airspace over the territory of the unrecognized Donetsk People's Republic on April 21, 2021 and flew to Mariupol. Despite the authority and popularity of the portal, this message has caused quite reasonable skepticism. What gives us reason to believe that we are facing another frankly stupid fake?

At first, we reserve the right to doubt that Flightradar24 is not biased. Yes, this is a very popular application, which is used today in 150 countries of the world, among its corporate clients are such aviation giants as Airbus, Boeing and Embraer. Increased attention to its capabilities was drawn in 2010 during the eruption of the Icelandic volcano with the unpronounceable name Eyjafjallajökull, which made it difficult to fly over Europe. The mainstream media then referred to Flightradar24 data, which tracked the movements of aircraft. The web service itself was created in 2007 and still belongs to the Swedish company Svenska Resenätverket AB. However, one should not forget that Sweden, although not a full member of the North Atlantic Alliance, is actively cooperating with it.

SecondlyIt is not entirely clear how Flightradar24 could track the movements of the A-100 Premier military reconnaissance aircraft. The operation of air trackers is possible only with ADS-B type transponders turned on on the aircraft. In this case, the planes generate and broadcast a special radio message every second, in which they display data on their current location, altitude and flight speed. Also, the aviatracker can display information about the type and side number of the aircraft, its owner, the place of departure and landing.

Undoubtedly, this is very convenient, but one must understand that such services are relevant only for civil air carriers. ADS-B transponders are now mandatory installed on all types of Airbus, Boeing aircraft, as well as on our civilian airliners. Domestic military transport aircraft have similar devices (the Il-76MD-90A is the base for the A-100), but their type is different. Flightradar24's ADS-B ground receiver network is unable to receive messages from Russian military aircraft transponders.

Thirdly, it is not at all clear, why would our long-range reconnaissance aircraft fly into the territory of the DPR and fly to Mariupol? If the A-100 suddenly found itself near this port city, it would immediately be detected by the air defense system of Ukraine, as well as by American intelligence, which would immediately have caused the corresponding political statements of Kiev and Washington. But this did not happen, and here's why.

On the one hand, it would be a clear provocation, which the Kremlin itself would clearly want to avoid. High-ranking Russian officials, in fact, say in plain text that Moscow does not want to fight with Kiev, and now there is information that the "military exercises" near the Ukrainian border in the Western and Southern districts have been successfully completed and are being phased out altogether.

On the other hand, what is the general need for the DLRO A-100 aircraft to enter the airspace of Independent? Our "flying radar" is based on the Il-76MD-90A to replace the aging A-50 and A-50U. The new aircraft for long-range radar reconnaissance and control is capable of staying in the air at a distance of 1 kilometers from the base for up to 6 hours, while effectively simultaneously tracking up to 300 targets at a distance of 650 kilometers. Therefore, the question arises, why should he enter the airspace of Ukraine, if the A-100 is able to "see" everything that happens on the territory of the DPR and LPR from Russian territory?

And, finally, the "icing on the cake" fake from the Swedish web service Flightradar24. The fact is that DLRO A-100 aircraft are not yet in service with the Russian army. The only "Premier" took off in 2017, and sophisticated equipment is being fine-tuned to this day. It should enter the Russian Aerospace Forces only in 2024, and only after that the serial production of the A-100 will begin. Imagine that the Ministry of Defense of the Russian Federation put on the only prototype of a secret AWACS aircraft, stuffed with the most modern reconnaissance equipment and is still undergoing state tests, a civil transponder and sent it to violate the airspace of Nezalezhnaya in the direction of Mariupol, where it could well have been shot down by the Ukrainian air defense system, the author of the lines difficult. And you?
Ctrl Enter
Noticed oshЫbku Highlight text and press. Ctrl + Enter
We are
Who actually won the Cold War and what the future holds for the world
"We must beat first": the geopolitical alignment around Russia is continuously deteriorating
Reporterin Yandex News
Read Reporterin Google News
5 comments
Information
Dear reader, to leave comments on the publication, you must sign in.