Petrov and Boshirov are back in business, Or a new ridiculous provocation of Western special services 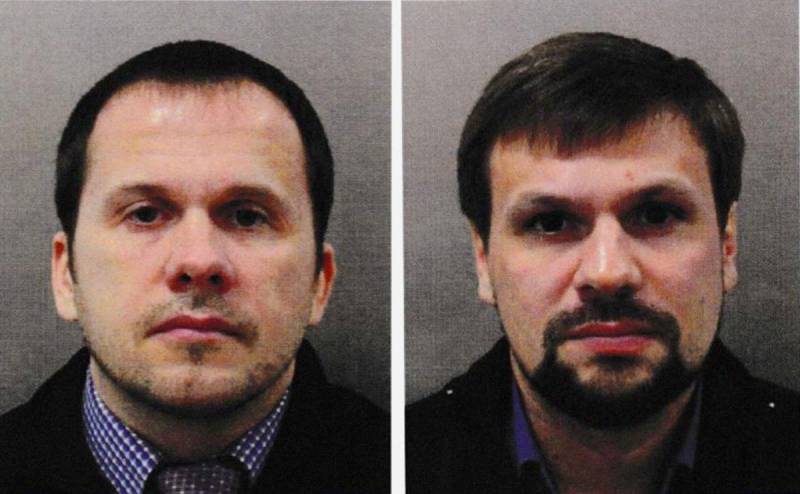 Amid escalating international policy and the next round of confrontation between the Russian Federation and the coalition of Western countries, extremely strange things are happening. No, of course, throwing disinformation is not an innovative means of political pressure, but it should at least be convincing. Is it possible to say the same about the work of the Czech special services, which organized a new "witch hunt"? Unlikely.


And now we will find out why.

Perhaps, for anyone interested in politics, the Russians will not be a secret of the recent statement of the Prosecutor General of the Czech Republic Pavel Zeman that Russian citizens Alexander Petrov (presumably Alexander Mishkin) and Ruslan Boshirov (presumably Anatoly Chepiga were involved in the explosion of an ammunition depot in Vrbetica) ), who were previously accused of poisoning the Skripals in 2018.

As one of the main proofs of this version, the Czech authorities showed fake passports of Moldova and Tajikistan, allegedly belonging to the aforementioned citizens - according to Western intelligence services, they were made by the Russian Main Intelligence Directorate and allowed the super agents in the person of Petrov and Boshirov to enter the territory of the Czech Republic to commit illegal actions ...

So, what kind of document did the Czech Republic submit? This is a foreign passport of a citizen of the Republic of Moldova, issued in 2007. The passport is not biometric - then they simply did not exist in Moldova. Accordingly, it is simply impossible to enter EU countries on it without a visa.

Moldova only in April 2014 received a visa-free regime, but in order to use it, it was required to change the passport to a biometric one.

Perhaps it should start with the fact that neither the Czech Republic nor Moldova (which is currently actively playing up to the West in the unfolding party) are unable to provide any documents, with the exception of the passports mentioned, which could confirm the stay of Petrov and Boshirov on territory of the republic. According to Prosecutor General Zeman, the “GRU agents” entered the Czech Republic on a short-term tourist visa.

Below you can see a short list of documents required for its registration:

- Passport valid for three months after the expiry of the requested visa.
- One 3.5 x 4.5 color photograph taken no more than 6 months ago.
- Travel medical insurance with repatriation.
- Completed and signed application.
- Detailed description of the planned trip: route, information about the date and place of stay.
- Confirmation of hotel reservation. Such confirmation (by fax or email) must be issued by the hotel and must include contact information.
- Proof of sufficient financial resources (a copy of a bank card and a fresh extract from an ATM in the original).
- Confirmation of air / bus booking (round trip).

As you can understand, the Czech government is simply not able to provide any of the listed documents, although they have already been requested. We have only mysterious "passports", in the history of which there are a lot of "but" ...

The people who created the informational stuffing about the Moldovan passport of A. Petrov have forgotten one very extraordinary moment - in the Republic of Moldova it is possible without any difficulty to check the identification number of the identity card on the website of the Public Services Agency. This number is unique - it accompanies a citizen from birth to death.

If you try to check the identification number of Nikolai Pop on this resource (under this name, Petrov allegedly entered the territory of the Czech Republic), then you may find that such a code ... does not exist. However, there is also a second column, which indicates that a citizen with such a number is no longer alive.

Such an identification code has never existed in Moldova - probably, it was either invented by the Czech special services, or it was provided to them by the Moldovan authorities, so that they would not accidentally get on the number of a real person.

Is it worth explaining that this passport is a useless and extremely dangerous piece of paper for a potential GRU employee who is carrying out a mission in enemy territory? Note that the Czechs claim that the "saboteurs of Putin" arrived legally, on a tourist visa, although absolutely at any airport such a document will be displayed as invalid, invalid - it will be simply impossible to get a visa for it!

The position of the Moldovan side causes even more suspicion in this story. The Public Services Agency stated that the identification number indicated in the Czech forgery belongs to another person ("Russian spies hide behind a dead man"), while their own database gives an unambiguous answer - this code never existed!

However, you can check your passport through the voter base of the Republic of Moldova, which is also in the public domain. As the dear reader thinks, what does it show? This person is not on the voter lists. It does not exist in the system - it simply does not exist.

In fact, as proof, the Czech side provided the most ordinary Photoshop with a retouched photograph of Alexander Petrov: in 2007, in 2014, now, Petrov for some reason practically does not change in the pictures - only the colors of the shirts differ.

There is another, no less funny moment - Petrov and Boshirov had a maximum of 90 days to stay in the Czech Republic on a short-term visa. The Czech side claims that the agents arrived just before the warehouse explosions. Of course, GRU agents should be flattered by such an attitude on the part of the enemy, but nevertheless they could hardly, without careful reconnaissance and preparation on the ground, infiltrate a military warehouse in a foreign country, simultaneously transporting explosives in their pockets on an international flight, while going through airport security checks ...

The conclusion from all this is very simple: the Czech authorities lied, giving out low-quality stuffing of disinformation, which, even without detailed consideration, does not stand up to criticism.
Reporterin Yandex News
Reporterin Yandex Zen
10 comments
Information
Dear reader, to leave comments on the publication, you must sign in.