Transport corridor "Persian Gulf - Black Sea": how it is dangerous for Russia 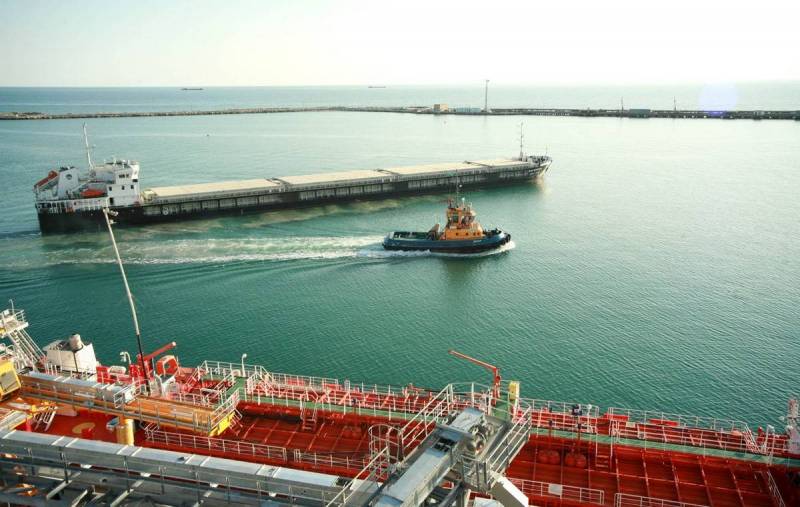 The Black Sea turns into an arena of confrontation between three former empires at once: the Ottoman, Russian and Persian. Tehran is now ready to join the struggle for transit flows from Asia to Europe between Ankara and Moscow.


Let us remind you that Russia is a key participant in the North-South international transport corridor project, which is supposed to connect India through Iran and the Caspian with the Baltic countries. This route is intended to become one of the alternatives to the popular waterway through the Suez Canal, which recently turned out to be unexpectedly clogged by a giant dry cargo ship. Turkey also plans to ride the so-called "Middle Corridor" on the way from China to Europe through the countries of Central Asia. The implementation of these plans of Ankara became possible after Azerbaijan, with its military assistance, defeated Yerevan in Nagorno-Karabakh and achieved the opening of a land corridor through the Armenian territory connecting the allied Turkic-speaking countries and giving the Turks access to the Caspian Sea.

Despite the fact that Iran is a full-fledged participant in the North-South project, Tehran has now stepped up its efforts to implement its own infrastructure project, which will bypass both Russia, Turkey and Azerbaijan. This initiative to connect the Persian Gulf and the Black Sea with a single transport corridor with further access to Europe was announced by the Iranian authorities back in 2017. What is it, and what are the real prospects for this "Persian Route"?

Initially, Tehran considered two options for transit through Transcaucasia: through Azerbaijan to the Black Sea coast of Georgia, or through Armenia also to Georgian ports. Russia was automatically excluded from this scheme due to political problems between Tbilisi and Moscow over the status of Abkhazia and South Ossetia. However, apparently, Iran has already ruled out the option of transit through Azerbaijan due to the close rapprochement between Baku and Ankara. Tehran's goal is to create an alternative to Turkey's infrastructure projects, rather than increase geopolitical dependence on it.

For this reason, the Islamic Republic relies not on Azerbaijan, but on Armenia as a transit country. For this, Yerevan must finally put into operation the North-South highway, which runs through the entire country and connects both its borders. Further, containerized cargo will go to the Georgian port of Poti on the Black Sea. From there the bulk carriers will go to Bulgaria, where Sofia has already given preliminary consent to make Burgas and Varna points of entry for the "Persian Route". Moreover, the authorities of this country are even ready to invest in the construction of special terminals. From the Bulgarian ports, a direct route to Greece and Italy opens for Chinese goods. In other words, Iran intends to become a major transit hub by gaining access to the markets of Southeast Europe. This became especially relevant after Beijing announced its readiness to invest $ 400 billion in the Islamic Republic over the next 25 years.

For our country, these are not very good news... The "Persian route" is more than two times shorter than the route through the Suez Canal, and the delivery of freight containers is significantly cheaper. The North-South project with the participation of Russia is being implemented too slowly, and therefore Tehran can also involve India, Oman and, in the future, even Iraq and Syria. A few days ago, a meeting of representatives of Armenia, Bulgaria, Greece and Georgia was held in the Iranian capital, as a result of which it was announced that the "Persian Gulf-Black Sea" transport corridor would be launched in the very near future. The head of the Iranian Infrastructure Ministry Amin Tarafo said:

Given his economic efficiency and safety, the launch of this corridor will accelerate Asian trade with Europe and create an even greater link of transit to regional and international trade between Iran, the South Caucasus countries and the Black Sea.
If Tehran succeeds, it will be a serious blow at the same time to the ambitions of both Russia and Turkey and Azerbaijan. The importance of our country on the Black Sea as a large logistics hub will sharply decrease, while the traffic flowing through the Azerbaijani and Turkish territories will also decrease. According to experts, it is simply faster, cheaper and safer for carriers. It is no secret that Iranian trucks and buses in transit periodically “accidentally” catch fire there. Tehran's stake on Armenia would help to somewhat strengthen its geopolitical positions, which were shaken after the military defeat.

However, things are not as simple as the Iranian authorities would like. Let's talk about the possible pitfalls.

At first, it should be borne in mind that there is no peace between Baku and Yerevan, but there is only a truce, which can be violated at any time. The issue of Nagorno-Karabakh has not yet been finally closed, and in the event of the start of the second round of the war over its remnants, the normal transit of cargo flows through the Armenian territory will obviously be closed or hampered.

Secondly, Tehran should not forget that all its other potential partners in this infrastructure project are "vassals" of the United States. These are Georgia, Bulgaria, Greece and Italy. It is enough to exclude any link from this logistic chain, and it will all crumble. And it is very simple to do this, it is enough to look at what is currently happening in Russia with the quite recently friendly Czech Republic. One provocation, of which the Iranian special services will be accused, is enough, and Tbilisi or Sofia will suspend cooperation with the Islamic Republic, despite the fact that this means a great lost profit for them. The example of South Stream, which Bulgaria actually buried to its own detriment, will not allow one to lie.

Most likely, Washington will first give the Iranians and Chinese the opportunity to invest in this infrastructure project, like Gazprom with its Nord Stream 2, and then it will start to put a spoke in its wheels, forcing it to constantly look for some options for solving problems and increasing costs investors.
Ctrl Enter
Noticed oshЫbku Highlight text and press. Ctrl + Enter
We are
Channel "Eurasia": Russia needs to connect the Caspian with the Sea of ​​Azov
Peace enforcement operation. Russia inflicts a preemptive strike on Kiev
Reporterin Yandex News
Read Reporterin Google News
8 comments
Information
Dear reader, to leave comments on the publication, you must sign in.