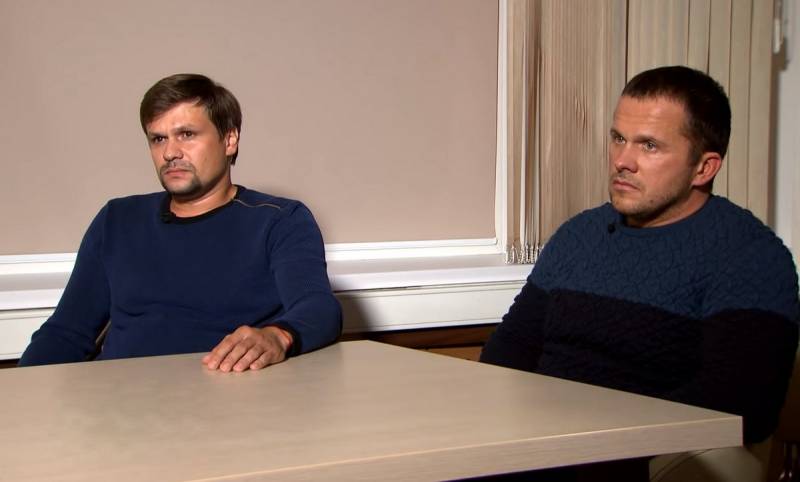 There are several Russian surnames that they know for sure or at least once heard in all countries of the world. This is Lenin, Stalin, Putin, perhaps Rasputin, and now - "Petrov and Boshirov", who have already become heroes of songs, jokes and memes, replacing us at the same time Stirlitz and Chapaev. Now they can become the reason for the rupture of diplomatic relations between Russia and the countries of the European Union.


So what happened. "The GRU agents Petrov and Boshirov" dealt another blow to the foundations of Western civilization, this time from the past, from 2014. According to the Czech police, the two of them flew to Prague under these names, then, using forged documents, gained access to an ammunition depot in Vrbetica, where they allegedly set explosives on two consignments of ammunition intended for supplies to Ukraine. After that, there were two explosions with a significant time interval, on October 16 and December 3, 2014, as a result of which two citizens of the Czech Republic were killed.

And now, almost seven years after those tragic events, the official Prague suddenly for some reason decided that it was “Petrov and Boshirov” who were involved in this crime. By the way, the Czech police have no evidence that this inseparable couple actually ended up in a warehouse where they could mine ammunition. She also does not have intelligible answers to a simple question, why did the GRU even need to stage a real terrorist attack on the territory of a country that is a member of the European Union and NATO. What exactly could the sale of ammunition to Ukraine change? The Czechs did not intend to transport a nuclear bomb to Kiev. However, there is no sane answer from the Western intelligence services to the question of why "Petrov and Boshirov" had to poison the unwanted spy-defector Sergei Skripal in Great Britain with chemical weapons of mass destruction.

Apparently, the “GRU agents” were remembered only because a certain Bulgarian businessman Emilian Gebrev was involved in the ammunition explosion case, who was also allegedly repeatedly tried to persecute with “Novichok”, but was never killed to the end. Oh, this "Newbie"! Czech ammunition, Bulgarian businessman, GRU, Sergei Skripal, Novichok, Putin - do you feel the connection? The author of the lines does not feel at all, no matter how hard he tried. However, the story with our "special agents" will have a number of serious consequences.

At first, Russia has lost the right to participate in the tender for the construction of the next power unit of the Czech NPP "Dukovany". Our Rosatom had a very good chance of winning, since the only one can offer a full cycle of services, from the design of a nuclear power plant to the disposal of spent nuclear fuel. At the same time, the price tag for the customer would be one and a half times lower than that of competitors. Now, because of this extremely murky story with Petrov and Boshirov, the Russian state corporation has been barred from taking part in the tender for the construction of the next power unit. The American company Westinghouse and the French company EdF will get preference. Coincidence? We don’t think so. Too much money is spinning here. It was enough to pull out a dusty folder with an unsolved case from the table and tie the media famous "Petrov and Boshirov" to it - and, voila, "Rosatom" in flight for purely political reasons. As for the credibility of the version about the involvement of the GRU, everything was done according to the precepts of Hitler's chief propagandist Joseph Goebbels: the more monstrous the lie, the easier it is to believe in it.

Secondly, the one who organized the persecution of our "little men" forced Prague to actually break off diplomatic relations with Moscow. Russian diplomatic workers have already been expelled from the Czech Republic, and now a new action is being prepared. The Russian Foreign Ministry responded to Prague by symmetrically expelling Czech diplomats. Deputy Prime Minister Jan Hamacek, who is also the head of the Ministry of Foreign Affairs of the Republic, said:

I expected a slightly different reaction from the Russian side, but good ... I am ready for anything - and for building (Czech-Russian) relations from scratch. This means we will send them all home.
In fact, there is only one last step left until the complete rupture of diplomatic relations between our countries. Most likely, Prague, like London in its time on the poisoning of the Skripal family on its territory, will ask other EU countries to show solidarity with itself and also expel Russian diplomats. And who can benefit from all this?

Let us recall that the United States is currently waging a real diplomatic war with Russia and is striving for the international isolation of Moscow. Washington is consistently lowering the level of diplomatic relations with the Kremlin and is extremely interested in forcing the European Union to follow. Probably, this can explain a lot in the issue of the reappearance of our ubiquitous "Petrov and Boshirov", which they tried rather unconvincingly to tie to the explosions at the ammunition depot in the Czech Republic.
Reporterin Yandex News
Reporterin Yandex Zen
36 comments
Information
Dear reader, to leave comments on the publication, you must sign in.