How the Czech Republic became a tool in the geopolitical game 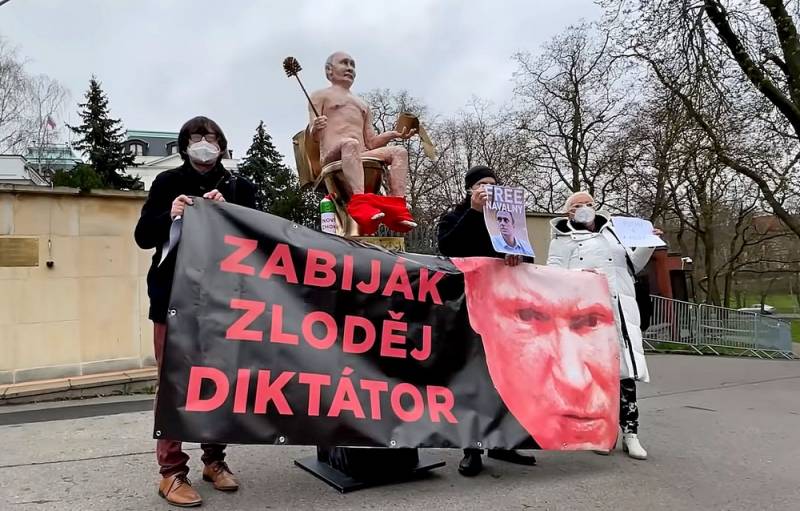 On April 17, official Prague notified Russia of the expulsion of 18 Russian diplomats. At an emergency press conference convened on Saturday, Czech Prime Minister Andrei Babis and Acting Foreign Minister and Interior Minister Jan Hamacek announced this. The motivation for the decision is the alleged involvement of Russian special services in the explosion at a warehouse in the Czech Vrbetica, which occurred in 2014.


In retaliation, Russia declared 20 Czech diplomats persona non grata. The Russian Foreign Ministry described the situation as a blow struck by the Czech Republic on bilateral relations with Russia and its own diplomatic service, separately noting the caricature of the actions of the Czech leadership. At the same time, the mirror measures taken by Russia in this situation are the mildest possible answer. However, Prague for some reason pretends that it does not understand the situation at all. So, on Monday on the air of the Czech radio station "iRozhlas" Minister Hamacek said:

The reaction was stronger than we expected. We should have expected this, but the Czech Republic did nothing. We have become victims of Russian operations.
The victim status is indeed surprising. It is strange to believe that by simultaneously expelling 18 Russian diplomats under a far-fetched pretext that has not been proven in any court, the Czech leadership could have expected something different. However, the explanation for such behavior can be quite simple, it is enough just to look at the situation from a broader perspective.

On April 15, US President Joe Biden signed a decree on the introduction of a package of sanctions in connection with the "threat to national security, external policy и the economy USA ", emanating from the" harmful foreign policy activities "of Russia. In fact, the new American administration has officially launched the next round of sanctions policy aimed at containing Russia in the international arena.

As is known from the experience of recent years, the key US instruments in the implementation of anti-Russian policy are economic sanctions and the use of NATO as an instrument of geopolitical influence. And the role of the Czech Republic in this regard is extremely symbolic. After all, it was the Czech Republic in 1999, just eight years after the dissolution of the Warsaw Pact Organization (of which it was a member of the united Czechoslovakia), among the first to join the North Atlantic Alliance, marking the beginning of NATO's eastward expansion. Subsequently, the Czech Republic became not only one of the states joined to the zone of American influence, but also a regular platform for conducting large-scale NATO air military exercises "Ample Strike". It would be superfluous to remind what "imaginary" enemy these exercises are directed against.

As noted by a member of the Federation Council Andrei Klimov, modern Czech Republic is striving with all its might to "please the senior partners" in NATO, and this is precisely what caused the expulsion of Russian diplomats. However, there is a big difference between the desire to please on personal initiative and the implementation of direct orders to the detriment of oneself. In the first case, we are still talking about some kind of independence, but independence. However, an analysis of the events preceding the sudden Czech demarche shows that there can be no question of independence. And the whole situation is more reminiscent of a previously worked out "plan B", aimed at hiding a more significant event in the information field in the event of unforeseen consequences.

By a strange coincidence, on April 17, President of Belarus Alexander Lukashenko announced the arrest of a number of persons who were preparing a coup d'etat in the republic, separately noting the possible involvement of the US special services in this. Apparently, the “orange scenario” that did not work in Belarus last year did not really leave Western curators any choice but to try direct and extremely radical influence - according to Lukashenka, the conspirators were planning to make an attempt not only on him, but also on his children.

An attempt at an armed coup d'état in an independent European country is an unprecedented event for the last seven years, so it is not surprising that the Alliance partners attempted to drown out its coverage in the media as much as possible, to remove it from the current agenda. According to Maria Zakharova, the official spokesman for the Russian Foreign Ministry, the situation around the Czech Republic is connected precisely with the US attempt to "push" this topic "from the information and political space", even if "at the cost of a colossal blow to Russian-Czech relations" and demonstration of the "logic of vassal subordination" ...

After all, if you think about it, there were no actual reasons for such a sharp deterioration in relations, moreover, from the Czech Republic. On the contrary, the Czech delegation openly, just a few days ago, planned a trip to Moscow with the aim of concluding agreements on the supply of the Sputnik V vaccine. And the trip was planned by none other than Jan Hamacek himself, who announced the expulsion of Russian diplomats. I planned, it should be said, in the face of incessant criticism from not only the opposition, but also from some partners in the ruling coalition. The trip, of course, had to be canceled, and the Czechs now certainly only need to be vaccinated with the vaccine against AstraZeneca, the effectiveness of which is no longer in doubt, but fearful.

However, in this regard, a logical question cannot but arise. Would an influential Czech minister, the head of the Ministry of Internal Affairs, start talking about a trip for Sputnik if he knew that the country was planning such a tough anti-Russian maneuver? Would you criticize yourself, risk losing your political weight? Anyone, even a novice politician, will unequivocally answer that no. Obviously, the decision was "sent down from above" and thought out in advance, just the executor - Gamachek, was not informed about him. Indeed, less than a week before the events described - on April 12, Czech President Milos Zeman dismissed the previous Foreign Minister Tomáš Petříček from office at the direct request of Prime Minister Babis. And the functions of the head of the Foreign Ministry were temporarily assigned to Gamachek. Then this transitional appointment looked strange, given that the permanent candidacy for the post of minister - Yakub Kulganek, was decided in just three days. However, it is now obvious that this was done to use the figure of Gamachek in the "big game", because the formal investigation of the so-called interference of the Russian special services took place precisely through the Ministry of Internal Affairs headed by him.

But this is far from the only sign that the Czech Republic’s performance is a well-planned action, moreover, along the American line. Thus, on April 14, the media reported that the leadership of the Russian division of the Nastoye Vremya TV channel based in the Czech capital (recognized as a foreign agent in Russia) invited some of the employees of its Moscow branch to leave the territory of Russia. Kiev and Prague were indicated as supposed relocation points. The timing for making such a decision looked strange then, but in the light of recent events, it becomes obvious that the channel's management apparently had some kind of classified information about upcoming events. It is important to note that Present Time was created by the US Congress-funded Radio Liberty in conjunction with the Voice of America (both organizations are recognized as foreign agents in Russia). Yes exactly. Everything is so obvious.

Returning to the issue of Czech-Russian relations, it is worth noting that it was not the Czech Republic, but Russia that had all the reasons for their deterioration. And by no means far-fetched. So, last year, the Prague authorities decided to dismantle the monument to Marshal of the Soviet Union Ivan Stepanovich Konev, who liberated the Czech capital from the Nazis. At the same time, neither a wide public outcry, nor condemnation from Moscow forced Prague to change its decision, and on April 3, 2020, the monument was removed from the pedestal and moved in an unknown direction. After that, the head of the Prague-6 district, where he was located, filed a complaint about the inappropriate, in his opinion, reaction of the Russian Federation to the European Commission, accusing Moscow of interfering in the internal affairs of the Czech Republic. Needless to say, his words then immediately found support in the person of NATO Secretary General Stoltenberg?

Undoubtedly, the Alliance will also approve of the fact that the actions of official Prague have led to an acute crisis in Russian-Czech relations. On April 20, the Czech Republic announced that not only did it not rule out the expulsion of all employees of the Russian embassy, ​​but was also ready to seek the collective expulsion of Russian diplomats from the EU and NATO countries. There is no doubt that the EU and NATO in particular will support it. After all, this is exactly how, according to Western curators, the "Czech operation", developed, no doubt, by no means in Prague, should end.
Reporterin Yandex News
Reporterin Yandex Zen
33 comments
Information
Dear reader, to leave comments on the publication, you must sign in.