BAM-2: How not to turn the "construction of the century" into a financial long-term construction 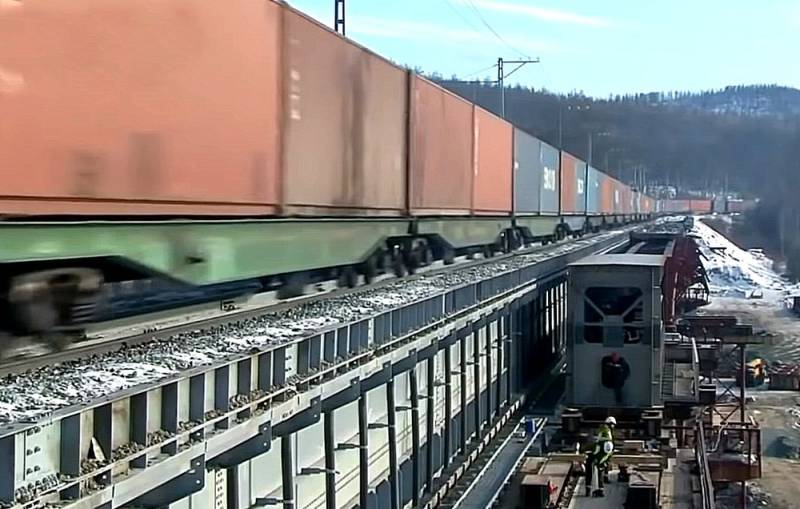 The recent story with the "blockage" of the Suez Canal by a giant dry cargo ship raised the question of the need to create an adequate alternative to it. In addition to the promising Northern Sea Route, the potential of which has yet to be revealed, Russia can offer numerous carrier companies the services of its railways passing through most of the Eurasian continent, the Trans-Siberian and BAM. However, in order to meet the increased demand, these railways need serious modernization to expand their capacity. And this task has already been set, which can only be welcomed, but at the same time, reasons for puzzled questions immediately arose.


Before proceeding to an analysis of these questions and an attempt to find answers to them, it should be noted that the expansion of the Baikal-Amur and Trans-Siberian railways in Russia is really necessary. They not only reliably connect the Eastern and Western parts of our country, but are also effective transit corridors for cargo flows from Asia to Europe. At the same time, BAM is of great strategic importance, actually duplicating the Transsib in the depths of the northern part of the Russian Federation, about which we are in detail told earlier. The government has set the task of increasing their throughput capacity from 144 to 180 million tons per year. At the initial stage, the cost of these infrastructure projects is estimated at 720 billion rubles.

Rather, it was estimated. According to the latest data, the estimate has already grown by 40 billion rubles, which immediately caused a great resonance in the domestic media. Let's add our "five cents" to these billions and we.

At first, it is not entirely clear where this rapid growth came from. Rather, it is understandable, since suppliers justify this by an increase in the cost of ferrous and non-ferrous metallurgy products, which amounted to 30% at once. The desire of the owners of metallurgical enterprises to earn extra money in our difficult times can be understood, however, the "construction of the century" still should not turn into a "golden" one. (At least not so fast). It should be borne in mind that the modernization of the BAM and Transsib is a project of national importance, and Russia is a country with a complete closed cycle of metallurgical production. There are at least two ways to reduce costs.

The first, which industry experts talk about, involves admission to tenders not only of domestic, but also of foreign suppliers. Rails and other metallurgical products are produced not only here, the same Japanese or Chinese will gladly grab the order, and competition will naturally lead to a decrease in the appetites of our oligarchs. The second method, proposed by the "right hand of Putin" Andrei Belousov, is perhaps even more radical. The Deputy Prime Minister voiced the idea of ​​introducing an indicative price for metallurgical products, the surplus profits from the sale of which should be withdrawn through special duties and taxes and sent to the “construction projects of the century”. A very interesting, statist approach, but for some reason it has not aroused any particular enthusiasm in anyone. This means that BAM-2 has every chance to continue to rise in price.

Secondly, not everything is clear with the stated goals of this infrastructure project. Initially, it was assumed that the expansion of the Trans-Siberian and Baikal-Amur Mainlines was done to increase the transit of cargo flows from China to Europe through our country. But now we are talking, rather, about the export of natural resources from Russia to China. About 70% of the load on both routes is coal that goes to seaports for supplies to China and other countries of the Asia-Pacific region. Russian timber and aluminum also go there. At the same time, the state has not been able to get the energy exporters to agree to the "take or pay" scheme. It was assumed that coal companies would have to conclude an agreement with Russian Railways on the transportation of a pre-agreed volume of cargo, making an advance payment for it. If they did not choose it, the money would not be returned to the customer. The measure is rather tough, but it would guarantee the loading of the BAM and Transsib at least in the eastern direction. However, domestic oligarchs managed to bargain for themselves that no more than 15 million tons of coal per year would be exported according to the "take or pay" principle. Everything else will come with significant discounts.

Therefore, the main beneficiaries of the modernization of these two railways will be coal miners and metallurgists. The state is expanding the Transsib and BAM for them, simplifying the export of natural resources to the east. At the same time, the most "bottleneck", in a straightforward and portable place, the Severomuisky tunnel in Buryatia, remains an unresolved problem. This tunnel runs through a mountain range and is the longest in the country and has a single track. This is literally a "bottleneck" that severely limits the BAM's capacity. The Second Severomuisky Tunnel, the work on which was started by Sibanthracite in 2019, could alleviate the problem. The American company The Robbins Company was to become the partner in the implementation of this infrastructure project. However, in 2020, the head of Sibanthracite, Dmitry Bosov, committed suicide, and construction work was suspended.

As a summary, I would like to conclude that our country really needs modernization of Russian railways, but it should serve the interests of the state and not turn into a financial "black hole".
Reporterin Yandex News
Reporterin Yandex Zen
5 comments
Information
Dear reader, to leave comments on the publication, you must sign in.