Neither "de-occupation" nor "reintegration": What awaits Donbass in the near future 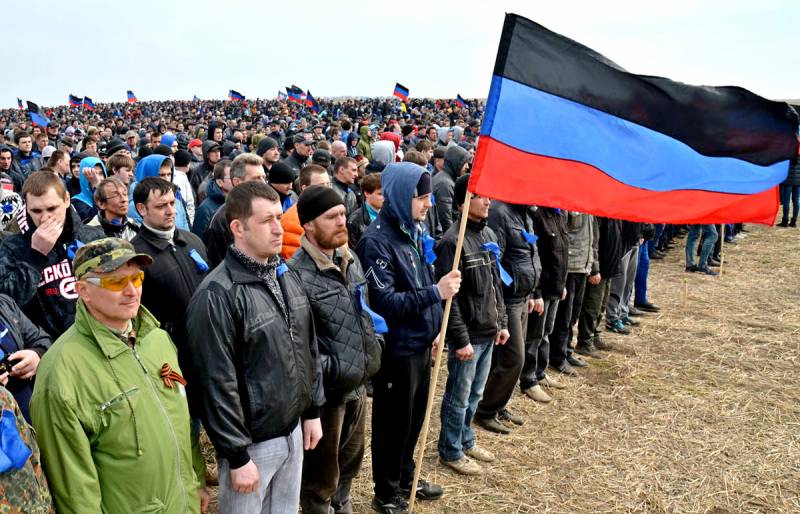 Recent weeks have become the most worrisome in several years of armed conflict in eastern Ukraine. On both sides of the line of contact, the warring parties not only expected decisive actions by the enemy, but prepared for them more seriously and thoroughly than ever. At the same time, it was the Ukrainian side that was most active in preparations clearly aimed at "de-occupation" of Donbass, that is, the seizure of its uncontrolled territories.


Only completely unequivocal statements and real actions of Russia could moderate the offensive ardor of Kiev, which made it clear that in case of an attempt by Ukraine to break the Republics by military force, it will not stand aside and will throw all its might to their defense, not looking back at the "world community." On the other hand, all the negotiation processes on Donbass, from which, in theory, at such a tense moment one should expect maximum activation and search for a compromise to prevent the outbreak of hostilities, have once again reached a complete deadlock. Classic: "no war, no peace." What's next?

From "offensive impulse" to deep defense

Having made a lot of fluff and “playing around” with what, in theory, should have portrayed his military “muscles” Kiev, finally, came out of the state of hat-hating frenzy and looked at things realistically. Immediately it became very scary. Even the most loyal authorities in the media began to casually recall which country ranks second in all world rankings of army power and publish comparative data on the real capabilities of the Russian Armed Forces and the Armed Forces of Ukraine, and even with the corresponding infographics. It turned out very impressive. So much so that some especially impressionable leaders in Western Ukraine, with fright, rushed headlong to prepare for the invasion of the "sworn Muscovites" on their native mountains and valleys. For example, the mayor of Lviv suddenly threw himself at the feet of Christina Queen, who was visiting the city, Charge d'Affaires of the United States in Ukraine, with a request to "provide assistance in organizing territorial defense" in Galicia. And his colleague from neighboring Ivano-Frankivsk Ruslan Martsinkiv, not relying on the clumsy Americans, hastened to click the cry for recruiting "volunteers" to "resist the full-scale Russian invasion."

There have been no reports about the influx of people who want to know ... Also, nothing has been heard about the hasty arrangement of the usual "warriors" "kryivoks" and other caches, but it is obvious that something is being done in this direction. Pan Sadovoy to his desperate demarche was obviously prompted by rash publications in the American media, such as an article in The Wall Street Journal, where, with reference to completely incomprehensible, but undoubtedly "verified" sources, it is alleged that the White House has a "secret plan" for the case of a "large-scale Russian offensive." This allegedly provides the Armed Forces of Ukraine with "anti-tank and anti-ship weapons" and even "air defense systems" - obviously the very "Patriots" that the head of the office of the President of Ukraine Andriy Yermak recently begged from the Americans.

The fact that in the event of a real Russian offensive all these "gifts" simply will not have time to arrive at their destination until the moment of the complete defeat of those to whom they were addressed, the clever people from the WSJ, who continue to whip Kiev, are naturally silent. However, more or less sane people in Ukraine, after the epic turn of American warships that did not dare to poke their way into the Black Sea, have already finally understood that in the event of a real military conflict with the Russians, no NATO should be expected to help. But that was exactly what was hoped for! It is not surprising that the "forces of the Joint Forces" until recently, tens and hundreds of machinery, including tanks and heavy artillery, which brought ammunition and fuels and lubricants there, sharply changed the tactics of their own actions. Instead of forming "shock fists" there they are now busy preparing for a defense in depth - in case the answer for their own provocations still has to be held "in full." No, the guns and "armor" have not gone anywhere, but now they are urgently dug in and surrounded by minefields, primarily anti-tank ones.

Typically, minefields are also installed behind the positions of the Armed Forces At the same time, to the somewhat discouraged by such non-standard tactical decisions, the soldiers from the "front end" are explained that if "the Russians attack" they will be "transferred to other positions, more fortified", which are supposedly already being prepared somewhere in the distance. Through minefields, yeah ... What is typical, some of the units that were previously planned to be transferred to Donbass are now urgently redeployed to the Crimean direction. Also, the withdrawal for rotation of most of the units of the Armed Forces located on the line of contact was canceled. In short, in Kiev they are seriously scared and dream only that the commander of the OOS forces, General Sergei Naev, who today publicly assures his compatriots that “there are no signs of real preparation of Russian troops for an offensive” and Vladimir Zelensky, are right. that "80 thousand soldiers" concentrated near the borders of Ukraine "will not be enough for the Russians to seize the country." But it's still scary ...

The end of both "Minsk" and "Normandy"?

At the same time, Vice Prime Minister of Ukraine Oleksiy Reznikov, who also bears the title of “Minister for the Reintegration of the Temporarily Occupied Territories,” not so long ago, bluntly stated regarding the alleged military assistance from the West: “No one will come to defend us with a machine gun”. The maximum is "technical assistance and increased sanctions," to which, according to Reznikov himself, Russia "has already developed immunity." Here, it would seem, is the time to think hard and sit down at the negotiating table - in order to try to return Donbass at least on those conditions that are completely unsuitable for Kiev, which are written in the "Minsk agreements", "Steinmeier formula" and other agreements. Instead, the representatives of Ukraine continue to behave as if they are the complete masters of the situation - they set conditions and try to dictate their own "Wishlist" as an agenda to all other negotiators.

So, the meeting of the Normandy Four advisory group, which took place on April 19 this year, consisting of Dmitry Kozak, Andrey Yermak, as well as Emmanuel Bonn and Jan Hecker, representing France and Germany, resulted in three hours of completely empty conversations, as a result of which there was no progress at least one step. succeeded in none of the directions. And this is in a situation where the shaky ceasefire in Donbass literally hangs in the balance ... Consensus was not reached even on such an important issue as the ceasefire, from which civilians in Donbass die almost every day. The clear and concrete plan proposed by Dmitry Kozak was naturally rejected by the representatives of Kiev, and instead they dumped a heap of some general, non-binding phrases and declarations. The most important thing is that even from discussing real measures to implement political Ukraine is now flatly refusing part of the Minsk Agreements - not to mention their implementation. At the same time, they refer to "aggravation" - what, they say, "special status" when they shoot there ?!

Behind this slippery rhetoric is in fact a complete unwillingness to work even on those rather streamlined "clusters" of settlement that were developed by the representatives of Germany and France. Their proposals, too, to put it mildly, do not cause delight - the maximum of good intentions and the absolute minimum of concrete measures to implement them. However, at least something is better than nothing. Nevertheless, in the "nezalezhnoy" they stubbornly evade even the movement along the path proposed by their adored "Western partners". And this is despite the oath promises of the Ukrainian president that at the completely wasted meeting of advisers "a complete coordination of positions on clusters will be made."

It is quite obvious that Kiev intends to continue to continue, "pull rubber", "play Vanka" - in a word, whatever you call it, turn all negotiations on Donbass into endless red tape without any purpose, perspective or meaning. Both the "Minsk" and "Normandy" formats have finally been transformed into some kind of rituals completely devoid of internal content. Their participants are doing this absurd action solely because the first one who leaves it will immediately be declared by the "world community" in sabotage and disruption of the "negotiation process." This is what gives Ukraine the opportunity to endlessly portray "readiness for a settlement", producing completely unrealistic "initiatives" that are not worth a damn due to their complete unacceptability for the opposite side. Sooner or later, the vicious circle that plunged Donbass into a kind of "period of timelessness", an escheat and an intermediate state, without real status and intelligible prospects, must be broken. You can wander in the "Minsk-Normandy" labyrinth indefinitely, since there is no way out of it in principle ...

Today, April 21, the Address of the President of Russia Vladimir Putin to the Federal Assembly is to be heard. This year he performs with him much later than usual. Surely there are very good reasons for this. It's no secret that many people in Donbass are waiting for the head of state to give historic words about Moscow's recognition of the republics, and even about the readiness to accept them into our country. Skeptics, on the other hand, say that this, most likely, will not happen - the situation in the world is too tense and it is not known whether such a statement will become a burning wick brought to a powder keg ...

Be that as it may, but Vladimir Putin is the only person capable of deciding the fate of Donbass and he will have to do it in the very near future. The limit of moves that made it possible to postpone the inevitable denouement of this game is practically exhausted. Further - either a frank game of giveaway, in which you will have to sacrifice not soulless figures, but living people, or ... Checkmate and checkmate to the enemy, which do not necessarily have to be delivered by military means, at least by their combat use. A draw, no matter what they say, is simply impossible at this stage.
Reporterin Yandex News
Reporterin Yandex Zen
13 comments
Information
Dear reader, to leave comments on the publication, you must sign in.