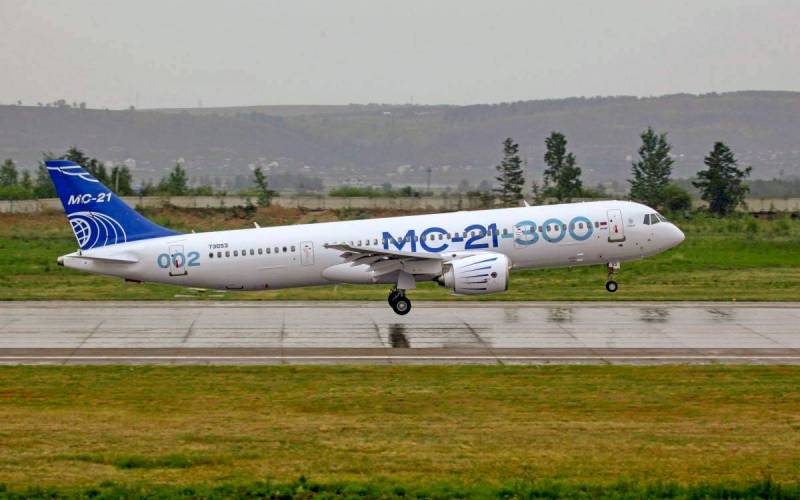 The start of serial production of the promising Russian airliner MS-21 is postponed until 2022. The reason was the problem with imported components that need to be replaced. At the same time, some representatives of the liberal economic schools speak in the spirit that, they say, it's okay, and the time for the plane to leave is unsuccessful, and it's not worth the candle - for the sake of "national pride" to fight for the Russian market, which is only 2% of the world market. Is it worth listening to the opinion of such "experts" or is it high time to send them all in the "forest"?


Over the decades that have passed since the collapse of the USSR, the domestic civil aircraft industry has been brought by reformers, as they say, "to the point". Today our sky is de facto owned by Boeing and Airbus corporations. MS-21 is our “great white hope” in the medium-haul segment of air transportation. The aircraft should be able to operate both on domestic and international airlines, that is, to compete with the products of American and European corporations, namely, the medium-haul airliners Boeing 737 MAX, Airbus A220 and Airbus A320neo, as well as the Chinese Comac C919. At the same time, the Russian aircraft has a clear competitive advantage over all of them in the form of an unusually wide cabin for a narrow-body airliner, which is ensured by an original design solution with its composite wings. The so-called "black wing" MC-21, made on the basis of carbon tape, is larger in size than that of its class counterparts, and allows for greater fuel economy during the flight.

Ill-wishers can sneer as much as they like about the “loss of competence” and “technological backwardness” of Russia, but the MS-21 is a real claim for success. It is clear that this one liner will not be able to launch Boeing and Airbus around the world, but it is able to compete on equal terms and even surpass their products in some way. Provided that adequate after-sales service is organized, this aircraft has a chance of gradually ousting the Boeing 737 MAX, Airbus A220 and Airbus A320neo from the domestic Russian market, as well as gaining a share on the international market. Industry experts are talking about 5%, and for a start this is already very good. For him will come the liners of the next generation, which will continue to gradually put pressure on the American and European concerns. In the West they know that Russia takes a long time to harness, but travels fast. That is why they tried to clip the MS-21 wings on the very takeoff. And in the literal sense of the word.

The main problem of the promising airliner was that it was designed, like the Superjet-100, according to the precepts of Russian liberals. Well, international cooperation, which supposedly has no alternatives, the “invisible hand of the market,” and all that. As a result, due to this approach, the share of Russian components in the Russian aircraft should have been only 38%, which became a huge problem for him. First, the United States imposed sanctions on the supply of composite materials to our country for the production of "black wings". Without them, the liner would have lost all its competitive advantages over the products of Boeing and Airbus. I had to hastily look for companies with the relevant competencies. It turned out that such a thing was still preserved in Tatarstan, where the research and production corporation "Khimprominzhiniring" was able to organize the production of carbon tape for the wings of the MS-21.

Unfortunately, this alone was not enough. The United States, in its desire to stop the revival of the Russian aircraft industry, took a different path. At the end of last year, a representative of the Ministry of Industry and Trade, the head of the department of the radio-electronic industry, Vasily Shpak, complained about "undeclared sanctions" that were de facto imposed:

Our foreign partners, who supply ready-made systems for our aircraft, someone publicly, someone secretly, informed our aircraft manufacturers that they would not continue their relationship with our aircraft manufacturers either under existing contracts or under new contracts.
This is already much more serious than simply launching the production of carbon tape in the country. Radio electronics requires a powerful research and production base, and it cannot be said that we are right among the world leaders in this. President Vladimir Putin called such actions on the part of Western countries "rudeness". But words cannot help matters. We will have to promptly substitute foreign electronics for Russian aircraft. The timing of the serial production of the MC-21 has again shifted to the right, which was admitted by the profile Deputy Prime Minister Yuri Borisov:

We still have a lot of hard work to do to replace up to 40% of the presence of foreign avionics in this flagship project.
Replace? Let's replace, but this process will take several years. It's a shame, unpleasant, but in the end, Russia will have production of its own radio electronics, which will reduce the dependence of the domestic civil aircraft industry on foreign suppliers. There are plans to increase the share of Russian components in MS-21 to 97%. By the way, the sad experience of the Superjet-100 short-haul liner led to the fact that Rostec undertook to create its version called Sukhoi Superjet New, the degree of localization of which also reaches 97%. Therefore, we still learn from mistakes.

What is even more pleasing, when developing the MS-21, the option of installing two different engines, American and Russian, was initially provided for on it. If we did not have our own PD-14, which is currently completing the certification process according to European standards, there is no doubt that the United States would certainly hit Russia with sanctions for the supply of a power plant. And it turns out that we have a modern aircraft engine, and a very decent medium-haul airliner will be in service in a few years. If it turns out in practice that the manufacturing company has learned the right lessons from the unhappy experience of the overseas operation of the Superjet, then we will definitely break through. As for the expected relatively modest share of the MC-21 in the world market, you have to start somewhere, right?
Ctrl Enter
Noticed oshЫbku Highlight text and press. Ctrl + Enter
We are
Creation of a new Boeing: "reset" of the aircraft giant or a gesture of despair?
Boeing slaughtered: the fall of the aircraft giant continues
Reporterin Yandex News
Read Reporterin Google News
16 comments
Information
Dear reader, to leave comments on the publication, you must sign in.