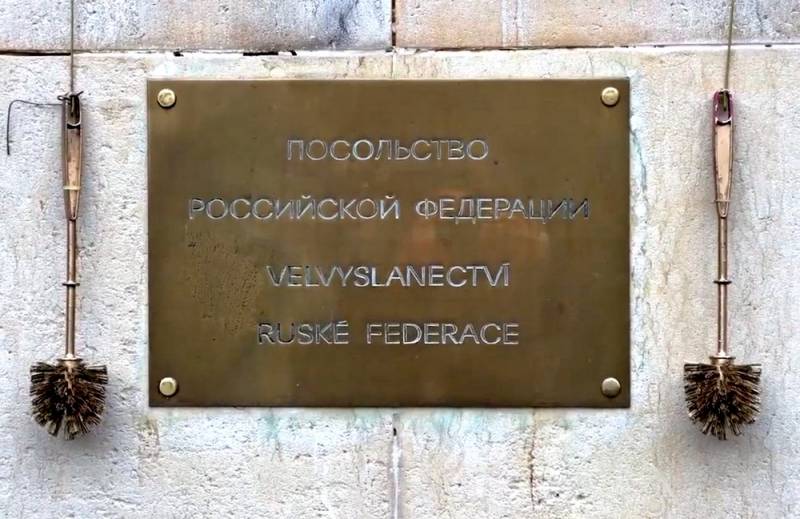 On Saturday, April 17, Czech authorities announced the expulsion of 18 Russian diplomats from the country, who are suspected of intelligence activities, as well as complicity in the explosion of an arms depot in Vrbetica seven years ago. The expulsion of the Russians provoked clashes at the Russian embassy in Prague.


According to the statement of the head of the Czech Foreign Ministry Jan Gamacek, representatives of the Russian diplomatic mission must leave the country within two days.

A group of Czech citizens gathered outside the building of the Russian embassy in Prague, who supported the decision of the authorities on measures against the Russians. Members of A Million Moments for Democracy carried anti-Russian banners. They also installed the figure of Vladimir Putin riding on a gold toilet bowl, and hung toilet brushes near a plaque on the wall surrounding the Russian embassy.

A pro-Russian group of people who opposed the actions of their authorities went to meet the provocateurs. A scuffle ensued. As a result of the incident, one of the participants in the clash was detained by the police.


In addition, earlier the gates of the Russian diplomatic mission were doused with ketchup. The police detained seven participants in the unlawful act, initiating administrative proceedings against them.

In response to the demarche of the Czech authorities, Moscow announced mirror measures. The Czech Ambassador Vitezslav Pivonka was summoned to the Russian Foreign Ministry, to whom a strong protest was announced in connection with measures against Russian diplomats. The Ministry of Foreign Affairs of the Russian Federation also ordered 20 employees of the Czech embassy to leave Russia by the end of Monday, April 19.

Foreign Ministry spokeswoman Maria Zakharova linked Prague's actions with Washington's anti-Russian position. In her opinion, the Czech Republic serves the interests of the United States and "does not pursue an independent line in international affairs."
Reporterin Yandex News
Reporterin Yandex Zen
5 comments
Information
Dear reader, to leave comments on the publication, you must sign in.