Attempted military coup in Belarus: on April 21 it will become clear what Moscow and Minsk are up to 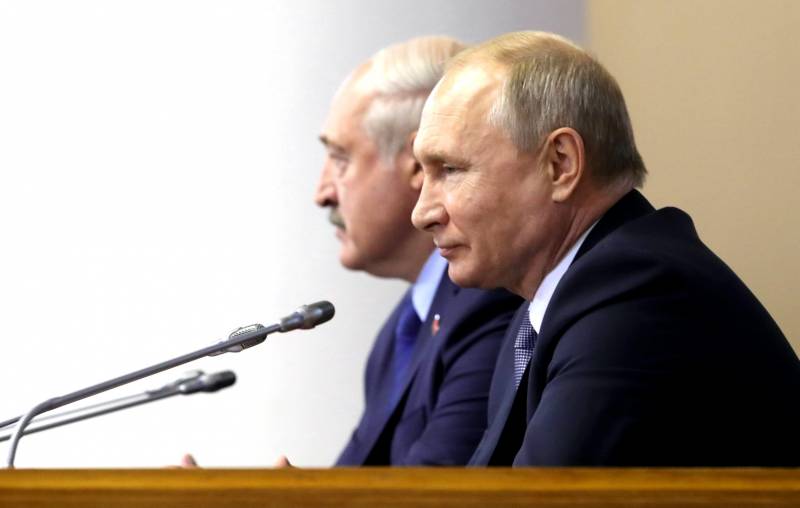 The day before, an attempt to organize the assassination of President Lukashenko and to carry out a coup d'etat in the country was prevented in friendly Belarus. According to Russian and Belarusian special services, the attack was supposed to take place during a military parade on May 9, and its potential customers are somewhere overseas. What were the organizers of this atrocity planning?


Let's go in order. According to the FSB, two citizens of the Republic of Belarus, Alexander Feduta and Yuri Zyankovich, were detained in Moscow, while the latter is also a US citizen. 56-year-old Feduta was once a member of the election headquarters of Alexander Lukashenko and worked as a press secretary in the presidency, but then moved to his camp political opponents. In 2010, he was taken into custody, and a year later he was recognized as a “prisoner of conscience” by Amnesty International. According to the Russian special services, Alexander Feduta planned to start political and ideological reform of Belarus, and the holder of two citizenships Zyankovich - to oversee the Parliament of the Republic of Belarus and the work of the country's legal system. And how did they intend to achieve these goals with President Lukashenko alive?

The answer is simple: they were going to kill him and carry out a coup d'etat in Belarus. In general terms, their diabolical plan looked like this: during the parade on May 9, 2021, the Belarusian president was to be killed, sharing the fate of his Egyptian counterpart Anwar Saddat. The conspirators intended to kidnap the children of Alexander Lukashenko and put them in a specially prepared basement somewhere in the Gomel region. Further, in order to disorganize the forces loyal to the president, the internal troops and riot police would have to be blocked and the power system of Belarus turned off. Television and radio centers, according to the classics, were subject to capture, first of all, with the organization of a special information broadcast to the population. The main role was assigned to “partisans” from among the Belarusian and Ukrainian radical nationalists. The ultimate goal of this political assassination and coup d'état would be the abolition of the presidency and the transfer of all power to a certain "Committee for National Reconciliation".

It's a hell of a plan indeed. Alexander Lukashenko made it clear that he sees “Washington's hand” behind him, since operations of this level can only be sanctioned at the level of the White House and personally by President Joe Biden. However, with common sense, some awkward questions arise.

At firstWhat kind of conspiracy is this that our special services know about in advance? It is reported that Feduta and Zyankovich “burned out”, having laid out all the ins and outs of the planned “color revolution” to some “opposition-minded Belarusian generals”, who for some reason were not in Minsk, but in Moscow. But what about the basics of conspiracy? How adequate was it to conduct correspondence on such delicate and punishable cases in Internet messengers? All this is incomprehensible.

Secondly, in the ambitious plans of the conspirators, openly "bottlenecks" are still visible on the shore. For example, the possible role of Russia, which is linked with Belarus by allied relations, is completely ignored. President Vladimir Putin made it very clear last year that he would not allow an attempted coup in Minsk. Why did the newly-minted "Bonapartes" decide that Moscow would stand aside in the event of a brutal public murder of legitimate President Lukashenko, the kidnapping of his children and the implementation of their plans with the seizure of television centers and the shutdown of the Belarusian energy system? This is weird.

Nevertheless, there is no smoke without fire, therefore we will not be frivolous about the information about the preparation of a coup attempt in a friendly country. Belarus is the last official ally of Russia, and its importance for our national security should not be underestimated. Today Minsk stands at a crossroads. For many decades, President Lukashenko diligently played in a multi-vector, balancing between West and East, but in the summer of 2020 this option was closed for him. The European partners did not appreciate the stunning results demonstrated by him in the last elections, and therefore did not recognize him as the legitimate head of state. The road to the West for Belarus under Alexander Grigorievich was closed, and there was a noticeable tilt towards Moscow. The prospects for the integration of the two RF and RB within the framework of the Union State have become more realistic.

It is clear that it is in the interests of our geopolitical adversaries to prevent such a scenario. It will not work to interfere with legal methods, only force remain, therefore the scenario of a military coup suggests itself. Let's pay attention to what political background these events are taking place.

On April 21, Moscow will host the annual press conference of President Vladimir Putin, which the head of the Federation Council Valentina Matvienko described as follows:

It will be such a message of the "new time", I would say, formulating a new coordinate system. In the current difficult situation in the world, which carries many challenges, including for Russia, it will undoubtedly be of particular importance.
The next day, April 22, a meeting of the Russian and Belarusian presidents is scheduled in Moscow, where the joint future of our two countries will be discussed. Then a meeting of the Council of Ministers is planned, and in the fall - the Supreme State Council of the Union State. One gets the impression that some progress is beginning in the integration process. Perhaps Alexander Grigorievich himself had something similar in mind, who stated the following following the results of the suppressed attempt at a military coup:

In the near future, I made a decision, we will formalize it now, I will announce it. This will be one of my principal decisions for a quarter of a century of presidency. It will be very serious. Therefore, even if I am not, in the popular saying, "only through my corpse", they will not succeed.
Let's face it, only its real one can rule out the “color revolution” in Belarus. economic and political integration with Russia.
Ctrl Enter
Noticed oshЫbku Highlight text and press. Ctrl + Enter
We are
Navalny is another failed Charite victim
Ten "defeats" of Putin
Reporterin Yandex News
Read Reporterin Google News
26 comments
Information
Dear reader, to leave comments on the publication, you must sign in.