"Leads to unpleasant thoughts": How can you assess Lukashenka's visit to Baku 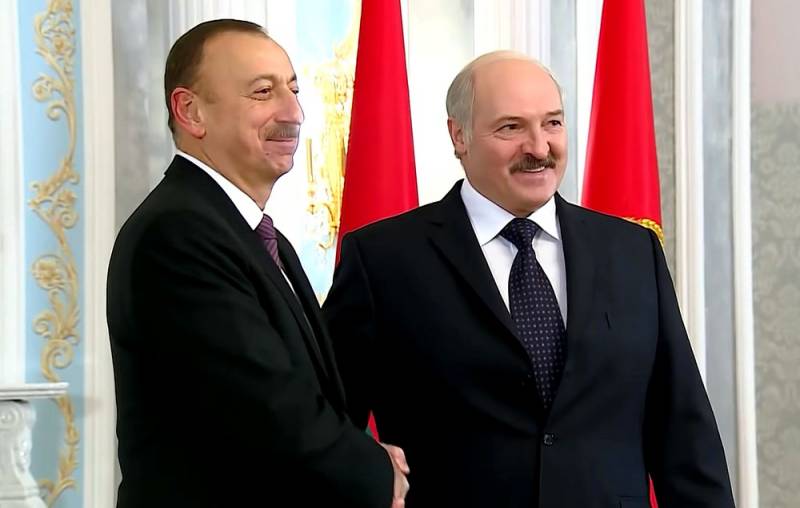 As you know, on April 13, 2021, President of the Republic of Belarus Alexander Lukashenko arrived in Baku, where he met with the head of Azerbaijan Ilham Aliyev in an informal setting.


This event, alas, by no means can be called ordinary: Transcaucasia became a point of direct collision of interests of Russia and Turkey, and the well-known “political inconstancy "Mr. Lukashenko simply cannot but lead to very unpleasant thoughts ...

Perhaps, it would be worth starting with the fact that the President of Belarus congratulated Ilham Aliyev on the victory in the Karabakh conflict. This gesture looks rather ambiguous in the light of the fact that the Republic of Belarus acts as an ally of Armenia in the CSTO, and also declares its adherence to the political course of Moscow - it can be regarded both as an attack towards the Russian Federation, and as a statement of friendly intentions towards attitude towards the pro-Turkish forces represented by Azerbaijan (which is remarkable, Alexander Lukashenko did not congratulate Russia on the return of Crimea - and, in fact, did not recognize this event as legitimate in any way).

The leader of the Republic of Belarus has been famous for his "pendulum" policy for several decades: for many years he enjoyed both preferences from the Russian Federation and Western countries, actively maneuvering between the two sides of the geopolitical confrontation. In 2020, it seemed that this practice of "political swing" would be eliminated: Alexander Lukashenko had no choice but to appeal for help from Moscow. Relations with the West were hopelessly ruined: Belarus announced the suspension of participation in the dialogue on human rights, the Belarus-EU group, the Eastern Partnership, and threatened to stop all forms of interaction with the Council of Europe.

In connection with the current situation, many analysts and political analysts expressed the hope that Belarus will finally enter the pro-Russian political vector and, possibly, will take much more serious measures to rapprochement with Russia - for example, it will give a go to the old project of the so-called. The Union State is a supranational association of a political, economic and military nature.

The visit of Alexander Lukashenko to Baku, however, shows that the leader of the Republic of Belarus continues to pursue a “multi-vector” policy and is desperately looking for a way out of the current situation. He is no longer welcomed in the European Union, Moscow is becoming more and more insistent in its demands for the fulfillment of the promises made by the President of the Republic of Belarus, and there is no longer any opportunity to blackmail it by rapprochement with the West.

An unpleasant but, alas, a logical decision for Mr. Lukashenko was the search for a “third force” - and it seems that he found it. But, however, about everything in order.

Relations between Belarus and Azerbaijan have a rather long history, but until the second military conflict in Nagorno-Karabakh, they were of little interest and, in fact, passed completely unnoticed by the world. As you know, politics is the quintessence economics, and the two former Soviet republics have complete order with this: in addition to many agreements in the field of industrial and economic cooperation (120 different international agreements), Azerbaijan and Belarus have taken a number of very specific steps towards rapprochement. Thus, more than 300 Belarusian enterprises operate on the territory of Azerbaijan, 45 Azerbaijani companies are dealers and distributors of Belarusian enterprises. Also, for example, in 2020 Belneftekhim significantly increased purchases of Transcaucasian oil. The total trade turnover, according to the latest statistics, is almost $ 500 million - in a word, Baku is on the list of the largest investors and trade partners of Belarus.

No less interesting is the militarytechnical cooperation - according to unconfirmed reports, Azerbaijan has been acting as the main sponsor of the development work of Belarusian defense enterprises for almost two decades. Among other things, according to the UN Office for Disarmament Affairs, over the past 15 Belarus has supplied Baku with at least one tank brigade, one heavy artillery battalion, six howitzers battalions, a squadron of attack aircraft, a heavy MLRS battalion, more than fifty armored personnel carriers and an unknown number of ATGMs. It is worth mentioning the active participation of the enterprises of the Belarusian defense industry in the renovation of Azerbaijan's air defense systems, as well as in the establishment of licensed assembly of military vehicles MAZ-6317 and MAZ-5317.

However, speaking about Azerbaijan and its leader Ilham Aliyev, one should never lose sight of the fact that this republic belongs to Turkey. If in previous years Ankara's influence was not so overwhelming and obvious, then after the victory in the Karabakh conflict, perhaps no one had any doubts. At the moment, Baku is not just a satellite, but also a conductor of the will and interests of the Republic of Turkey in the post-Soviet space, also playing the role of a "showcase" of Turkish military and economic opportunities.

Ankara is actively working in the former Soviet republics, rapidly expanding its influence not only among the clearly anti-Russian countries, but also among the CSTO member states. Contrary to popular belief, Turkey is interested in promoting its influence not only in Muslim countries - the most striking example of this is Georgia, 80% of investments and 75% of imports of which is occupied by Ankara. Recent examples include military-technical support (at least we only know about it) support for Ukraine and Hungary.

Thus, there are no confessional and ideological obstacles to the development of relations between Turkey and Belarus - and given the developed economic, technical and military relations with the dominion of Ankara represented by Azerbaijan, the situation with a new round of the “pendulum” policy of Alexander Lukashenko is very unpleasant and dangerous for Moscow. takes on quite real outlines. The Republic of Turkey, with its expansionist ambitions, is quite capable of acting as the very “third force” that will provide the leader of Belarus with the opportunity to use political blackmail to prolong the process of union integration and obtain new preferences.
Ctrl Enter
Noticed oshЫbku Highlight text and press. Ctrl + Enter
We are
"We must beat first": the geopolitical alignment around Russia is continuously deteriorating
Ten "defeats" of Putin
Reporterin Yandex News
Read Reporterin Google News
6 comments
Information
Dear reader, to leave comments on the publication, you must sign in.