Russia - USA: the first round is ours. The second begins ... 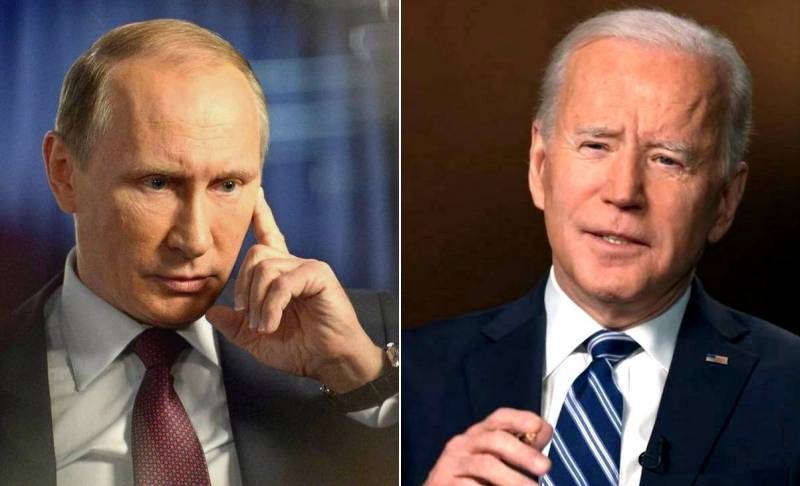 Indeed, these days a large international policy lost all predictability. It would seem that almost yesterday the presidents of the United States and Russia were talking quite peacefully on the phone, and Joe Biden even tried to appoint Vladimir Putin a "date" somewhere on "neutral territory" to discuss all controversial issues behind the scenes ... And now the head of Bely At home, he is already announcing new anti-Russian sanctions, and in addition, and is introducing an emergency situation in his own country "in connection with Moscow's malicious actions."


And how do you want to understand this ?! It's very simple. In the confrontation between the two world powers, relatively speaking, the first round has been completed and now, without any interruption or gong, the second begins. Moreover - with a petty blow from our opponents ...

Overpower the West? Turns out it's real

Why do I undertake to assert that it was Russia that prevailed at the first stage of the current confrontation? I will try to explain as concretely and substantively as possible. First of all, the escalation in Donbass was initiated by the Ukrainian side. And since Kiev has not been doing anything for a long time without being directed from across the ocean, we can assume that it was a “bullish game” started by Washington. Ideally, after the formidable warnings about the "high price" and similar things sounded from there, Russia, which reacted to the belligerent gestures of Kiev extremely sharply and on a large scale, would have to back down, withdraw its troops to the places of permanent deployment and explain for a long time that "nothing like that. I didn't want to ”, making excuses and apologizing. This did not happen - it was made clear to Ukraine that the next step beyond the line would be its last. The words about "the beginning of the end" sounded not as an emotional threat, but as a cold and therefore even more terrible warning. This is the first thing.

The second point is that Biden called Putin, and not vice versa. This action looks especially piquant in the light of the not-so-old rudeness that the American president allowed against ours. However, when the air really smelled of gunpowder, and Moscow more than clearly indicated its readiness to go to the end of the defense of Donbass (Ukraine), Mr. Biden reluctantly reached for the telephone receiver. Moreover, the American president was also the source of the initiative expressed in the course of the conversation regarding a summit meeting on the territory of a third country, which looks like a call for dialogue and compromise. At the same time, the Kremlin did not at all rush to present this invitation as a kind of "victory" or "breakthrough", but treated it with the utmost restraint, and then began to set conditions altogether ...

And finally, the point that causes particular pride - after the above conversation, the US Navy destroyers Roosevelt and Donald Cook changed their course, before that they were heading for the Black Sea to "give" us some kind of "signal". Not the warships of the Russian Black Sea Fleet and the Caspian Flotilla, currently conducting planned exercises there. Taking into account the unequivocal warning from our Ministry of Foreign Affairs to the United States: “stay away from Crimea”, all this clearly looks like a “back off” maneuver. However, the situation is far from being exhausted by the above points. At the same time, Kiev, the main initiator of the current aggravation, received a fair amount of "cold shower". First of all, we are talking about the statement of German Foreign Minister Heiko Maas, which discouraged the Ukrainian side, quite specifically pointed out that no "threat of war" can become an obstacle to the continuation of the construction of Nord Stream-2. We must pay tribute to the German diplomat - the move he used was simply brilliant: they say, according to Berlin, such a decision is not something that would not “pacify” Russia, but on the contrary, encouraged it to take even more drastic actions. The words of Maas that our country "is not at all interested in escalation in Donbass" sound too bad for Kiev.

Another big slap in the face of the "nezalezhnoy" was a statement made from another European capital - Paris. No sooner had the insensitive Germans strictly pointed out to Kiev that it had no place in NATO, so now the French, through the mouth of the Secretary of State for European Affairs at the country's Foreign Ministry, Clement Bona, clarified that they might not even dream of being admitted to the EU. In the light of Zelensky's upcoming visit to the country, we can say that he is flying over Paris as a well-known object ... The crowning of Ukraine's “humiliation” of Ukraine was the news that the head of the European Commission, Ursula von der Leyen, did not participate in the clownish action called “The Crimean Platform” intends under no guise. Taken together, all this looks like an extremely convincing geopolitical victory for Russia, which, with its firmness, managed to overpower the “collective West” at this stage.

It would be foolish and naive to hope to win a truly global battle in one round. Is that a knockout, but, frankly, I don’t even want to think about what could be considered in this capacity in the context we are discussing. As a matter of fact, the United States and Russia might not agree on a new one in the geopolitical "ring" - if the idea of ​​a meeting of their leaders, proposed by Washington, had been implemented. However, taking into account the latest actions of the local administration, the likelihood of such an event has not only dropped sharply, but, one might say, tends to absolute zero. Recall that very soon after the telephone conversation between Vladimir Putin and Joe Biden, the Kremlin announced clear conditions for the continuation of the dialogue. First, the United States must appease its Kiev puppets, who have recently dispersed in earnest in their belligerent rage.

Provocations on the line of contact were supposed to stop, as has happened more than once after a call from Washington - instantly and completely. Nothing of the kind is observed today. According to information coming from the republics, shelling from the Ukrainian Armed Forces continues. Moreover, the shells began to explode on the territory of Donetsk, which had not happened for a very long time. However, this is no longer of decisive importance - after all, the second conditions of Moscow, with which they intend to "improve the attitude", were fulfilled by the United States literally exactly "the other way round." It was voiced to the American ambassador to our country, John Sullivan, by the aide to the President of Russia, Pyotr Ushakov, and was that if the "peace-loving" talks are followed by more sanctions, Moscow, which categorically does not accept such double-dealing, will react to them "in the most decisive way." ... And so, as a matter of fact, it happened - Joe Biden signed a decree on April 15 introducing new restrictions, quite large-scale and serious.

How does this correlate with the intention to "normalize the state of US-Russian relations" - God knows. From the point of view of normal human logic, it does not correlate in any way. However, some people are already voicing versions like the one that the new sanctions package is a "warning to Putin" before the meeting, so that he "was more compliant" at it. Well, if this is so, then it will only remain to admit the correctness of those who have been repeating for a long time about the very serious problems of old Joe with the perception of the reality around him. At least due to the fact that such things have not passed to the Kremlin for a long time, which is substantively proved to the whole world over and over again. And the meeting in such situations, most likely, simply will not take place. New sanctions, albeit they sound quite menacing - "against the sovereign debt of Russia", in fact, no serious damage to our the economy unable to apply.

Let's not forget, we are talking about "some" restrictions on "certain transactions with government bonds", concerning "certain categories of foreign investors" and exclusively on the primary market. Yes, a priori nothing good. But in all seriousness, only Anders Aslund, who has long and firmly “moved by reason” on “black” predictions about Russia, as terrifying as unrealizable, can broadcast about the “long-term negative consequences” of these actions. There is much more confidence, for example, in the words of the deputy head of the Russian Ministry of Finance Sergei Aleksashenko, who reminded the domestic “all-propalts”, who are ready to break into panic, that since 2000, the share of non-residents in the growth of Russian federal loan bonds is “as much” 7%. Indeed, the poppy has not given birth for seven years ... Of course, neither hunger, nor devastation, nor "landslide inflation", nor other economic shocks will carry these restrictions to our country - all sane experts, both domestic and foreign.

Another question is what to do with the overseas "partners" who have once again "lost their shores". Summoned "on the carpet" to the Russian Foreign Ministry, US Ambassador Sullivan, forced to explain the actions of his country, proudly proclaimed that the American side firmly intends to "impose on the Russian government the costs for its actions that harm the United States, its allies and values." In response, he heard fervent assurances that the previously promised "decisive response" would follow in the very near future. Yes, it's time for us to impose something on Washington - yes, it's harder ... The funny thing is that speaking on the very day when he pushed the decision, in fact, crossing out the barely outlined prospect of normalizing relations, Joe Biden, like nothing never happened to continue talking about the "summer summit in Europe" with Vladimir Vladimirovich, and then ... about the readiness "to take further measures if Moscow continues in the same spirit." Truly, nothing comes to mind here, except for the old joke about the delights of sclerosis, in which they forget about the presence of insanity! On the other hand, perhaps the head of the White House is not as bad as he is trying to seem - after all, in his speech he did not fail to mention that "he could have gone further", but so far he did not begin to do so in order "not to exert undue pressure on Russia." ...

In short, we have before us a typical example of the continuation of the same American policy, in which the only arguments are blackmail, threats and hypocritical promises to “get along,” which no one is going to carry out. Nothing has changed and the next round has begun. How many of them are still ahead is still impossible to guess.
Ctrl Enter
Noticed oshЫbku Highlight text and press. Ctrl + Enter
We are
Who actually won the Cold War and what the future holds for the world
"We must beat first": the geopolitical alignment around Russia is continuously deteriorating
Reporterin Yandex News
Read Reporterin Google News
27 comments
Information
Dear reader, to leave comments on the publication, you must sign in.