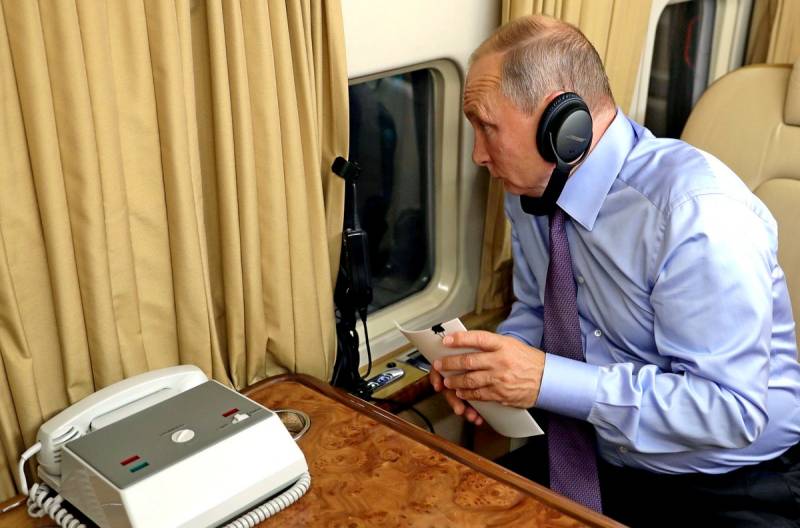 The story of the correspondence confrontation between the Russian and American presidents continued. Recall that Joe Biden in a scandalous interview with the media called Vladimir Putin a "killer", to which we all were justifiably offended. In response, President Putin ironically wished his overseas colleague "health", clearly hinting at his venerable age and related problems, and also called "Sleepy Joe" to some kind of public discussion on the air. And this is how it all turned out now.


First, the White House invited both China and Russia to take part in the international summit on climate change. Due to pandemic restrictions, the meeting of the heads of 40 states is to be held at the end of the month of April online. Then, on April 13, a telephone conversation took place between Biden and Putin, during which the American president proposed to hold a personal meeting of the two countries and discuss all the problems of our difficult relationship, which was announced in an official press release:

President Biden reaffirmed his goal of building a stable and predictable relationship with Russia in line with US interests and proposed a third country summit meeting in the coming months to discuss the full range of issues facing the US and Russia.
US Secretary of State Anthony Blinken spoke of the need for a bilateral presidential summit in the next few weeks. Later, famous for her inimitable style, White House spokeswoman Jen Psaki announced that this meeting could take place in the summer. However, the Kremlin is clearly not inclined to rush with it, which was directly stated by Dmitry Peskov, who refused to name a specific date. And now Washington has made a new move.

According to The New York Times and Reuters, the United States intends to impose sanctions on Russia's sovereign debt. A ban will be imposed on the purchase of federal loan bonds from the Central Bank and the RF Ministry of Finance. This will be a very tough restrictive measure, since a quarter of Russia's sovereign state debt belongs to foreign investors, including American banks, and our financial institutions expected to place securities worth 1 trillion rubles to cover it. Sanctions against OFZ should be part of the so-called "hellish" ones that have been scaring us for the past few years. And this, apparently, will finally happen.

But restrictions in the financial sector are far from all that awaits Russia in the near future. According to the respected Bloomberg agency, due to "interference in the American elections" another 20 Russian legal entities and 12 individuals will be sanctioned. Also, 10 more Russian diplomats will be expelled from the United States, and some media outlets allegedly controlled by our special services and "caught" in spreading disinformation will fall under the gun of the American Themis.

Hmm, so we "talked" about building "predictable and stable relationships." "Sleepy Joe" instead of a public discussion, defiantly held out his right hand to his Russian colleague, and hit him in the stomach with his left. Will a reconciliatory meeting between the two presidents take place against such a political background? It is highly doubtful. Then why is Washington openly ready to aggravate relations with Moscow?

At first, the leadership of the US Democratic Party is clearly determined to continue to put pressure on Vladimir Putin personally. It is no secret that a black cat has long been running between them, and the "globalists" are ready to continue to put pressure on the Kremlin in order to get the Russian president to leave and be replaced by a more comfortable pro-Western one. policy... If the White House wanted to really normalize relations with Russia, then there would be no public statements about the "killer" and packages of tough sanctions before the announced meeting. Undoubtedly, after the introduction of new restrictions, Moscow will not be able to respond to Washington with any positive step. The personal meeting between Joe Biden and Vladimir Putin has been postponed indefinitely, while the American authorities have done everything so that the Russians appear to be guilty of this in the eyes of the world community. Well, how is it? Did "Sleepy Joe" hold out the hand of friendship? He held it out. But Putin himself refused. Sanctions against the sovereign state debt of the Russian Federation? So something else, and for other things.

Secondly, the general geopolitical context should be taken into account. In fact, China is today even a greater adversary for the United States than Russia. The main goal of Washington is to weaken the PRC, and also not to allow the formation of some kind of real alliance between Beijing and Moscow, where the first violin will objectively play the Celestial Empire by virtue of its economic power. The Americans clearly intend to weaken China from within, using the Taiwan factor. Note that just the day before, a representative delegation from Washington went to Taipei, to which the continent reacted extremely negatively. The Chinese media are now actively discussing the topic, why not try to return the island, as Russia returned the peninsula. The PRC naval forces are being concentrated not far from Taiwan. It is clear that while on the part of Beijing this is so far a demonstration of determination, and not a real preparation for an amphibious assault.

Why is Washington preparing to introduce a package of severe restrictive measures against Moscow at the same time? Yes, so that the Kremlin emphatically stayed away from a possible conflict, not being too zealous as a reliable "rear" for the Celestial Empire. If so, then the United States is killing two birds with one stone.
Ctrl Enter
Noticed oshЫbku Highlight text and press. Ctrl + Enter
We are
Who actually won the Cold War and what the future holds for the world
Ten "defeats" of Putin
Reporterin Yandex News
Read Reporterin Google News
15 comments
Information
Dear reader, to leave comments on the publication, you must sign in.