The new Russian "Cedar" must penetrate any American missile defense 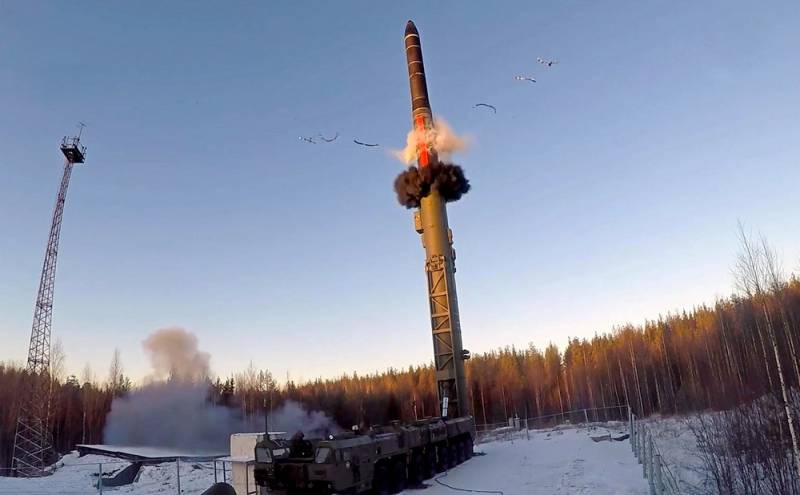 Russia's nuclear shield will become even stronger. To this end, the RF Ministry of Defense is soon preparing to launch a program to create a new intercontinental ballistic missile, which will be named Kedr. The development will be carried out by the Moscow Institute of Heat Engineering (MIT), which has already given the country the Topol and Yarsy families. What are the tasks assigned to the new Russian ICBM?


It is quite obvious that our Strategic Missile Forces are currently in a state of transition and profound reform. At sea, the carriers of the Bulava ICBM, which was created with a lot of difficulties, are the Borei and Borei-A nuclear submarine missile carriers. On land, due to funding problems, the military department had to abandon the Barguzin mobile railway complex project. Due to the demands of the Americans, the promising RS-26 Rubezh ICBM was excluded from the armaments program, which was in a high degree of readiness, which allegedly violated the INF Treaty. The aging RN-100N UTTH intercontinental ballistic missiles, Soviet-made RN-XNUMXN UTTKh, are to be withdrawn from service soon. The outdated Topol-M complexes are gradually being replaced by Yarsy as part of the Strategic Missile Forces. What will the Russian "nuclear shield" look like in the foreseeable future?

Undoubtedly, the need to update the strategic missile forces is caused by the efforts of the Pentagon to expand the missile defense system and its plans to deploy medium-range missiles in Europe. In the United States, work is underway to create a space echelon of an anti-missile system. The response to these challenges was a hasty reform of the Russian Strategic Missile Forces. On the horizon of the next few decades, two ICBMs should remain in service with our country.

The first is the fifth-generation RS-28 “Sarmat” strategic silo-based missile system with a heavy liquid-propellant ICBM. This rocket should be able to deliver several nuclear warheads through the South Pole of the Earth along a suborbital trajectory. Functionally, they should replace the R-36M2 Voevoda, which were developed and maintained by the Ukrainian Yuzhnoye design bureau. It is assumed that the "Sarmatians" will be able to bypass the zones controlled by the American missile defense system, without hindrance reaching the territory of the United States. And then the Avangard hypersonic maneuvering units will come into play, which can become an insoluble problem for the American missile defense system. At present, the outdated RN-100N UTTKh are used as carriers of the Avangards, but they will soon be replaced by the Sarmatians.

At present, the Strategic Missile Forces are in the process of replacing strategic missile systems with Topol-M solid-propellant ICBMs with RS-24 Yars. With strong external similarity, they are very radically different in their functionality. The huge disadvantage of the Topol and Topol-M was that they were equipped with an intercontinental missile with only one warhead. This greatly simplified the task of the American missile defense system to intercept them, since one successfully launched anti-missile was enough. Everything was changed by the Yars, which is equipped with a multiple warhead with individual guidance units. It is assumed that one ICBM can carry up to a dozen nuclear warheads. This gave the Ministry of Defense of the Russian Federation the opportunity to hit several targets at once with one shot of the Yars, while at the same time complicating the task of intercepting the missile defense system. But these are far from all the problems of the Pentagon.

In addition, the intercontinental strategic missile is also equipped with a missile defense penetration complex, which also throws out a dozen false targets. As a result, a whole "cloud" of warheads and "bogus", while actively maneuvering, goes to potential targets along a low trajectory. For one shot of the Yars, in contrast to the Topol-M, the Pentagon will have to spend at least 21 interceptors. And it should also be borne in mind that the Russian ICBM is equipped with an electronic warfare system, which also complicates interception, creating active radio interference. Even the vaunted American Aegis is capable of loading it.

To defend against the Russian Strategic Missile Forces, the United States is trying to rebuild its missile defense. And here "Cedar" should appear on the stage. The work on it will be carried out by specialists of the same Moscow Institute of Heat Engineering, so it is obvious that there will be continuity from Yars. The missile complex will be both mine-based and mobile ground-based. It is not excluded that the chassis can be used on developments on the currently closed project RS-26 "Rubezh", the launcher of which was as much as 40 tons lighter than that of "Yars". Sources in the RF Ministry of Defense do not give any more detailed data on the tactical and technical characteristics of the Kedr, but it is obvious that the new intercontinental ballistic missile, which is expected to appear by the thirties, will have to fully meet the challenges of the time. There is no doubt that the developers should lay in the new ICBM maximum capabilities to overcome the promising American missile defense systems, as well as the potential for deep modernization of the "Cedar".
Ctrl Enter
Noticed oshЫbku Highlight text and press. Ctrl + Enter
We are
Replacement of "Yarsu" will begin to develop in a few years
Space shield of the Motherland: the West is not in vain afraid of Russian inspector satellites
Reporterin Yandex News
Read Reporterin Google News
7 comments
Information
Dear reader, to leave comments on the publication, you must sign in.