"Selfish interests": why Kiev is trying to provoke Moscow to war 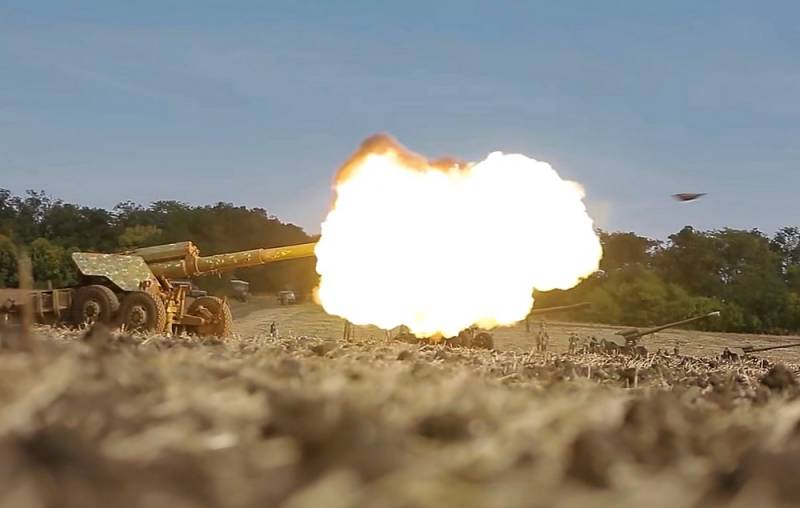 As many experts assumed, the exacerbation of the situation in Donbass provoked by Kiev is used by those in power to achieve their own "selfish" interests. Perhaps the first among them is the desire to draw out more “help” from our own “Western partners”, and in any available form. Most of all, the temporary workers who have seized upon the leadership of the country would be pleased with financial injections, which can be plundered quickly and without problems.


However, weapons and military technique they are also quite satisfied. Yes, at least something! If only they gave it ... At the same time, Zelensky and his henchmen completely ignore the fact that in this way they are begging for an eternal continuation of the war for Ukraine ...

From "Evening Quarter" - to the staged "war"

Those who at one time admitted that Vladimir Zelensky would someday get rid of the clown in himself and overcome his own inclination to cheap shows, made a mistake in the most bitter way. The performance that the comedian president staged on April 12 does not even honor him, and even for the world-famous television company CNN, which has gotten involved in such a dubious case, it can even be considered a real shame. The story she aired with the pretentious title "Russia is building up its troops, and the president of Ukraine is going into the trenches" may well claim victory in the fight for any journalistic anti-prize. At the very beginning of the plot, a tragic voiceover narrates with inspiration that “drowning in thick black mud, Vladimir Zelensky with his troops is quietly moving along the web of trenches and tunnels of the front line in the East country "and" forced to run with his guards in the most advanced positions. "

Meanwhile, the Ukrainian president is really briskly jumping between some heaps of rubble, which can be anywhere - even near Kiev, depicting "short runs under the bullets." In this case, however, there is a detail that completely destroys the entire "front" atmosphere. Not only that, the footage of the movement has been remounted, more than once ... All those accompanying Zelensky, and most importantly, including the CNN operator, do not have helmets on their heads! There is only one way to explain this, as well as the generally idiotic escapade with walks of the first person of the state allegedly "under the gun of enemy snipers" - this is not shooting "on the front line", but a natural setting, carried out somewhere in the safe rear. Quite in the spirit of Zelensky. However, not only him ... СNN with this plot she went wild, as they say, to the fullest.

Trying to pass off the Ukrainian armored vehicles being deployed to Donbass, filmed at the Dnepropetrovsk railway station, for “moving Russian troops” is a shame even for the alternatively gifted American television crew, who are used to lying like breathing. However, this is not the main thing in the plot. All his "salt" lies in the "powerful message" that Zelensky passes on to the leadership of the United States through the CNN correspondent, who is flying with him in the same helicopter. At the same time, again, foolishly shouting over the roar of the screws spinning over their heads ... Here he behaves in a completely extortionate manner, declaring that the United States is, of course, a "good friend" (cash cow), but still Joe Biden "needs more." What's more ?! And everything! Money, weapons, and, most importantly, "effective support for Ukraine's entry into NATO." And it is necessary to act in this case, as the Ukrainian president teaches his American counterpart, "not in words." That is, we must understand that Washington is obliged to "bend on the knee" of all the other members of the Alliance (the same Germany, for example) so that they finally open its doors for Kiev.

At the same time, Zelensky, in fact, does not hide the fact that he calls NATO to "fight a little" for Ukrainian interests, mentioning that "an attack on one of its members makes everyone else react." For some reason, he ends his begging for souls with a quote from Shakespeare, which in this context looks neither to the village nor to the city: "To be or not to be - that is the question?" No, after all, a certain genre, in which a person has become skilled, eats into his flesh and blood forever. All that remains is, paraphrasing a well-known expression, to state: “Bringing a comedian to the presidency is not a tricky business. But to get the comedian out of the president ... "The most unpleasant thing is that if all this pathetic-militaristic clownery is recorded and replicated by American television, then, consequently, there is a certain request for it from the representatives of the US authorities, thus, obviously trying to form" the correct »Public opinion. For what?

"Patriot" Ukrainian "patriots" can not afford

This assumption is also supported by another speech by a high-ranking Kiev official in another authoritative American media. This time we are talking about an interview that the head of the presidential administration of Ukraine Andriy Yermak gave to Time magazine. It still sounds the same offended extortionate tone as in the speeches of his patron: Yermak claims that the “non-extortionate” in the Donbass does not wage a civil war against its own population, but, you see, “holds the defense for the entire West”. And the United States, for some reason, is placing Patriot missile systems, God knows where - already in Poland! "They must be in Ukraine!" - proclaims the head of the presidential office, clearly focusing on the word "must". At the same time, Yermak, in his usual manner, “shuffles” the facts as he pleases and with ease gives dreams as reality and wishful thinking.

Let's start with the fact that Warsaw does not have any Patriots at all. Perhaps they will appear in 2022. If nothing changes again - after all, the deal to acquire these air defense systems by Poland has a long and not very attractive history. In 2017, the Americans offered four batteries of their air defense systems to the Poles, who wished to "close" from our "Iskander" deployed in Kaliningrad, for a "ridiculous" amount of $ 8 billion. Those, being not fools themselves, to “warm up” someone in trading operations, were speechless because of the announced price. Warsaw and Washington bargained like bargainers at a horse fair for a whole year and eventually came to a compromise - there will be half the number of batteries, but missiles will be "sent out" in plenty - more than 200 units. And this pleasure will cost only about $ 5 billion. They shook hands in 2018, deliveries are expected, as already mentioned, in 2022. If the Americans do not change their minds and the price does not rise or the Poles are not crushed by the "toad" ...

At the same time, which is characteristic, in the process of the Winter Twenty virtual command-and-staff games held not so long ago at the Warsaw Academy of Military Art, in the conditions of maneuvers, the presence of not only Patriot air defense systems, but also F-35 fighters in the Polish army was "hammered". And this did not help even once - even the virtual Russians ripped the jovners to smithereens in just four days ... Perhaps Ukraine, which has more than two thousand kilometers of land border with Russia, just needs more Patriot, not some pathetic pair of batteries? Maybe so, but what can you do about the fact that, according to the simplest arithmetic calculations, one battery will cost at least $ 2 billion? The entire military budget of "nezalezhnoy" at the moment barely reaches two such sums. And if you take into account the pace and scale it is being stolen ... Most likely, this is why Yermak's speech contains nonsense about "defense for the whole West" and statements that this very West has something to Kiev ". However, at least for a second, only those who have completely lost their sense of reality can build illusions that the United States will provide free of charge to someone not only extremely expensive air defense systems, but in general any military equipment that has not been brought to the state of scrap metal.

For Patriot, Washington fights three skins from everyone, even from those countries, good relations with which are really important for American "vital interests." Saudi Arabia, which is the main US ally in the Middle East, pays. Japan playing the same role in the Far East. The Poles, who today act as the most loyal American satellites in Europe, will also pay, like nice little ones. Look, the Turks at one time begged for these air defense systems, begged - for money, by the way, but never begged. We thought about it and bought the Russian S-400. If in Kiev they seriously believe that they will receive from the Pentagon something other than used rubber boats and decommissioned patrol boats, then this is, excuse me, a diagnosis. Moreover, it is incurable.

There is in this all and one more impartial moment for Kiev. The Americans are afraid of giving into the hands of the local warriors some really valuable equipment and weapons, and not without good reason. Not so long ago, a colossal scandal erupted in the 28th brigade of the Armed Forces of Ukraine - its servicemen were convicted of regularly taking away and subsequently selling items of equipment received in the form of military-technical assistance from NATO countries at the most ordinary online auctions. In particular, we are talking about radio stations "Harris" and night vision devices AM / PVS-14. This - not counting the "little things" in the form of form and the like. They managed to bargain almost a million hryvnia. Now a special commission is examining the shameful facts, which, by the way, includes representatives of the Alliance - is it any wonder after that that the "Western partners" are afraid to hand over really modern equipment and weapons into such "reliable" hands. Who knows where it will "emerge" later?

And there is no doubt that theft in the Ukrainian army will continue to flourish. Just the other day, the department of Andriy Yermak, demanding Patriot supplies from the United States, appealed to the regional administrations of Ukraine with the lowest request "to provide gratuitous food assistance to units and subdivisions of the Armed Forces stationed on their territory," Defense ministries are unable to feed their military. The fact is that the suppliers who tried to ensure the supply of food to the army today do not want to release it at the prices that are fixed in the tender documents. Considering the explosive growth in prices for all food products, which is now taking place in Ukraine, they will earn much more in ordinary bazaars. Here is the office of the president in the person of Yermak's deputy, Anna Kovalenko, and is forced to beg from the local authorities "for something to eat" ...

That, in fact, is all that can be said about Ukraine's prospects for receiving American "Patriots", as well as about true Ukrainian "patriotism."
Ctrl Enter
Noticed oshЫbku Highlight text and press. Ctrl + Enter
We are
"We must beat first": the geopolitical alignment around Russia is continuously deteriorating
Ten "defeats" of Putin
Reporterin Yandex News
Read Reporterin Google News
7 comments
Information
Dear reader, to leave comments on the publication, you must sign in.