Zelensky ready to give half of Motor Sich to Turks 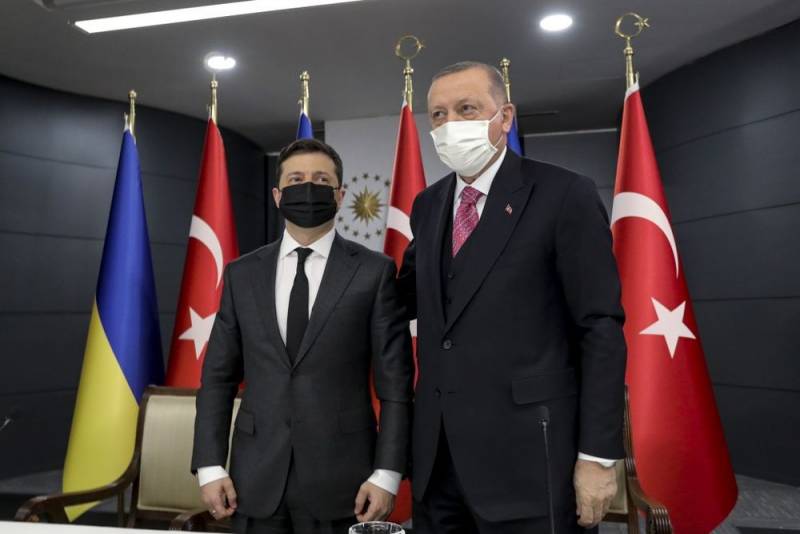 President of Ukraine Volodymyr Zelensky during Visit to Istanbul on April 10, 2021, he offered his Turkish colleague Recep Tayyip Erdogan half of the shares of the recently nationalized engine-building company Motor Sich, according to Ukrainian media.


This initiative may be of great interest to the Turkish side, which desperately needs engines for the production of drones and a missile program. The Ukrainian Internet portal Mind tried to sort out the situation, the journalist of which talked to “one of the veterans of the enterprise”.

Do you think Zelensky just visited Ankara? A 50% stake in Motor Sich has already been offered to the Turks. The only question is, is 50% “plus” 1 share or 50% “minus” one share?
- clarified the informant.

The interlocutor noted that all developments are classified and they are covered by state and commercial secrets. At the same time, the head of Motor Sich, Vyacheslav Boguslaev, has a "bonus" for design and technical documentation. However, the design bureau "Ivchenko-Progress", the main developer of technologies, remained the property of the state even before that.

According to him, Motor Sich's products are in demand in the countries of the ex-USSR and in the allies of the former superpower, such as India, Afghanistan and others. He explained that Beijing did not need the enterprise itself, but only technology and technical documentation. China wanted to learn how to make aircraft engines and become a country with similar technologies. In turn, the United States opposed this development of events in every possible way and hampered the development of the PRC as best they could. At the same time, Kiev needs Motor Sich to resume production of P95-300 engines used in surface-to-surface and air-to-surface missiles.

At the start of negotiations with the Chinese side, the auditors estimated the enterprise from $ 500 million to $ 1 billion. The transaction price, as far as I know, was $ 575 million. Who and how divided this money? Hardly anyone will admit
- he said.

The informant recalled that Motor Sich manufactures a variety of aircraft engines for airplanes and helicopters. But now it is much more profitable to manufacture power units for drones and missiles, due to the increased demand. Moreover, there is no need to compete with large aircraft manufacturing corporations that already have suppliers or their own production of engines. At the same time, Boguslaev offered to sell China 35%, leaving Ukraine 65%, and not selling anything to Turkey.

However, I think that the Turkish option is more profitable for Ukraine. Are we a warring country? So why not strengthen our army? Akinci flies at altitudes up to 12 meters, can lift about 000 ton of bombs or missiles, and can stay in the air for almost 1 hours. It carries a bunch of useful equipment: video, thermal imagers, radars, etc. We only need to agree with the Turks on the division of sales markets
He explained.

The informant summed up that Kiev will definitely have to take into account the interests of Washington. If Turkey comes to an agreement with the United States, the deal will take place, and if not, then no.
Reporterin Yandex News
Reporterin Yandex Zen
1 comment
Information
Dear reader, to leave comments on the publication, you must sign in.