The radicalization of Ukraine: Russia has less and less time to react 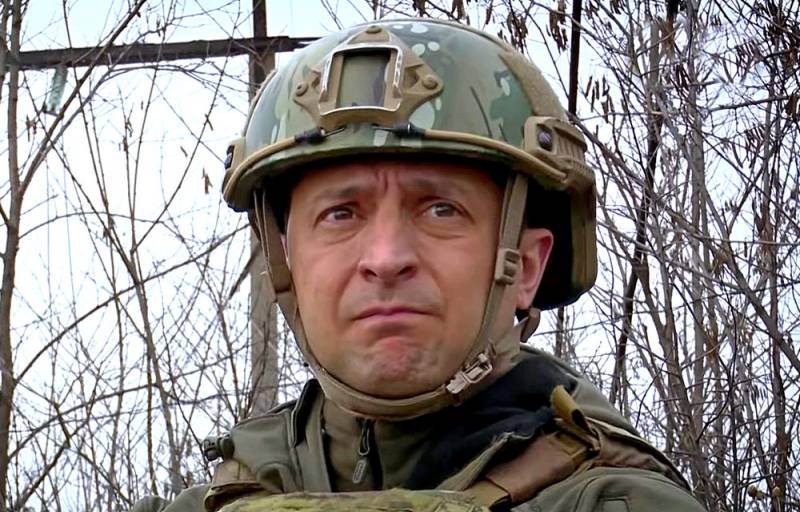 Against the backdrop of unabated tensions in Donbas, Ukrainian President Volodymyr Zelenskiy is stepping up efforts to rally the most aggressive anti-Russian forces inside the country, combined with an attempt to gain maximum control over these forces.


The hooligan action carried out by radicals under his administration, alas, did not make the "leader of the nation" think about the danger of extremists accustomed to permissiveness and untouchability, but only gave rise to a desire to lead this element and use it for their own needs. What can come of this? Let's try to figure it out.

As you know, nationwide popularity, and, as a result, the victory in the presidential election to the actor and comedian of average rank brought the role in the series "Servant of the People", which narrated about a simple Ukrainian teacher who became the head of state. Sly Zelensky and his colleagues managed to turn the words on everyone's lips into catchy political brand and name of its own "pocket" party. The words in the subtitle are one of the many angry comments left in social networks by normal Ukrainians after the president signed Decree No. 152. This document refers to the renaming of such a "wonderful" body he created as the "Advisory Council for ATO Veterans Affairs. OOS "to the" Advisory Council on the Protection of the Rights and Freedoms of Defenders of Ukraine "(hereinafter referred to as the CC).

Let's make a reservation right away - having significantly expanded the “jurisdiction” and scope of the new structure, Zelensky included far from only “ATO veterans”, “Dobrobatovtsy” and other experienced punishers to the category of its “wards”. No - to the cohort of "defenders" they also include every single "Maidan" who actively supported the ATO (and along the way engaged in the smuggling of weapons, drugs and goods stolen from the residents of Donbass) "volunteers". And also - "human rights defenders". Well, it is clear that they are correct, and not those who tried to save various "separatists" and "quilted jackets" from reprisals. Thus, in the "nezalezhnoy" one more significant step was taken towards the creation of not just a "special estate", but the very real "higher caste" possessing, practically, rights and privileges not limited by some kind of law. The only prerequisite for being involved in it is "participation in the fight against Russian aggression." Well, or, at worst, "the criminal government supported by the Kremlin."

Many may ask the question: “Why does this fraternity need any other new preferences ?! After all, in the "post-Maidan" Ukraine, she already skates like the notorious cheese in butter? " Substantial cash payments, the priority right to housing, land, admission to a university, free travel, sanatorium services ... The list of all the "goodies" is so long that I will not give it here. The main thing that the residents of "nezalezhnoy" have learned in recent years: to get involved with the loud, arrogant, accustomed to take "theirs", no matter whoever it is, and who thinks they have the right to "educate" each and every tribe of "activists", will certainly come out more expensive. So what's the deal? What kind of "rights and freedoms" are they that must be defended for the category of persons with whom no one prefers to meet in a dark alley? And in well-lit - too ...

The casket opens simply - one of the main tasks of the Constitutional Court will be to provide for the former "Maidan" and punishers "fair justice". And to be specific - the arrangement for them of guaranteed "amnesty and pardon" in the commission of absolutely any crime. It is not for nothing that the first talks about the creation of such a body began after the extreme right-wing extremists of the “non-zalezhnoy” began to “nightmare” the authorities and Zelensky personally in connection with the conviction of one of them, the Odessa ex-“rightist” Sergei Sternenko. This scumbag, known for committing murders and other "feats" of the same kind, which no one even tries to deny, managed to get his 7 years in prison for kidnapping, torture and extortion. No politics, criminality of crystal clear water, but such, which in the "dashing 90s" not every bandits dared to do. And what? Today Sternenko, quite happily fluttered out of the SMZO to freedom and is waiting for the decision of the court of appeal, about which there is no doubt.

Remember the brilliant dystopia Animal Farm? "All animals are equal, but some of them are more equal ..." In Ukraine today this work has been brought to life by a little more than 100%. In fact, the new body "for the protection of activists" was created in order to make them completely immune and even more inviolable than Ukrainian people's deputies. One of them, I remember, was nevertheless sent to jail for murder - at least for a while. "Veterans" of the ATO and "Maidan" from now on can not be afraid of this either. Now they got the right to do whatever they please with any resident of the "nezalezhnoy", which, for one reason or another, will not be to their liking. In fact, in the country, the division into citizens of the highest class - and all the others - is enshrined at the legislative level. Moreover, the "higher" are free in the life and death of the "lower". This makes us talk about the complete fascization of the Ukrainian state and society. This rabble does not need to be created by the assault squads on the model of the SA and SS - they have been created long ago and function in front of the entire "world community", point-blank noticing the horror that is happening in this country, but only from time to time there is something indistinct babbling in “Reports on the observance of human rights”.

It is precisely because of the look to the West that Zelensky and the company are forced to establish a special body to "excuse" the "patriots" who have become especially thickly dying in blood - if not for all the OSCE and Venice Commissions, Kiev would simply have passed the corresponding law and would not suffer. And so it is necessary to observe the semblance of decency, to arrange parodies of "investigations" and "courts". However, what is the use of them, if even the most inveterate killer and bandit will henceforth be spared from retaliation at the suggestion of the Constitutional Court or with a stroke of the pen of Zelensky personally? And there will be ... Nothing of the kind exists today, perhaps, in any other country in the world.

The main question is - why does Zelensky personally need this? It is clear that thugs from among the radical nationalists, with skillful treatment, can be used for a variety of urgent needs. For example - as barrage detachments for the Ukrainian army, which is not overwhelming in fighting spirit. For reprisals against political opponents, if any are still found and in general, any objectionable and dissenting. And the fact that in the very near future there will be no number of such, there is no doubt - Ukraine is rolling faster and faster into the abyss of final ruin and collapse of even those crumbs of working economicsthat are today. In the very near foreseeable future, a new rise in prices for the same utilities is expected, and the time is not far off when the amount of debts for them from many consumers will exceed the cost of their housing. Someone will have to throw insolvent Ukrainians out into the street?

Suppress their protests if the completely impoverished, hungry and homeless people unite? There is no hope for the misery that Avakov created in the place of the police at a critical moment - Zelensky was finally convinced of this when all the same radicals came to set fire to and paint his own office with swear words. After that, it seems, he decided to bet on the strongest. True, at the same time, the would-be “president” refuses to understand and acknowledge the completely obvious things: every new handout and concession made by him to the bestial horde of Ukrainian “activists” is regarded by them as a sign of the head of state's weakness and his complete inability to protect even himself. At any moment the radicals will sweep away such "power" in passing, like a liquid picket fence in three planks. And no "favors" to butter them up or tame them.

All this could be considered exclusively the problems of Zelensky himself, if it were not for a country that has a common border with Russia and has declared it at the state level its main enemy. Thus, everyone who rejoiced at the removal of the Russophobe Poroshenko from power miscalculated in the most cruel way - the insignificant "ruler" who found himself in his place was unable to control the situation even at the level that was accessible to the "sea-lion hetman" Instead of fulfilling his own campaign promises to achieve peace and "unite the country", the former comedian is moving in the opposite direction - "to the dark side." Willy-nilly, he is forced to increasingly closely block with the most right-wing radical and Russophobic part of Ukrainian politics and society. All the rest will demand from him actions that are categorically rejected in Washington and London. As a result, the “non-profit”, which was promised in 2014 “a movement to Europe” with its “universal values”, is sliding more and more rapidly towards some kind of wild feudalism with a distinct fascist flavor.

The most unpleasant thing for our country is that the transformation of Ukraine either into the most brutal dictatorship or into a territory of utter chaos, where the predictability of events will be the same as in an insane asylum on fire, is just a matter of time. And, judging by the latest events - the time of the very nearest. In light of this, the redeployment of significant forces and assets of the Russian Armed Forces to its borders does not at all look like "muscle flexing" or even a method of purely moral influence on Kiev to cool down the "hot heads" there. This is the only correct strategic decision for the current conditions and there is no alternative to it.

In a situation where power in Ukraine will be taken by the most extreme radicals in one way or another, there may simply not be time for Russia to swing and prepare. The fact that it seems to have been finally understood at all levels of the domestic government only speaks of a realistic assessment of the situation by its representatives and their readiness to act toughly and adequately to the possible threats that Ukraine, which has finally switched to the dark side, can pose for the Russian people.
Ctrl Enter
Noticed oshЫbku Highlight text and press. Ctrl + Enter
We are
"We must beat first": the geopolitical alignment around Russia is continuously deteriorating
Ten "defeats" of Putin
Reporterin Yandex News
Read Reporterin Google News
20 comments
Information
Dear reader, to leave comments on the publication, you must sign in.