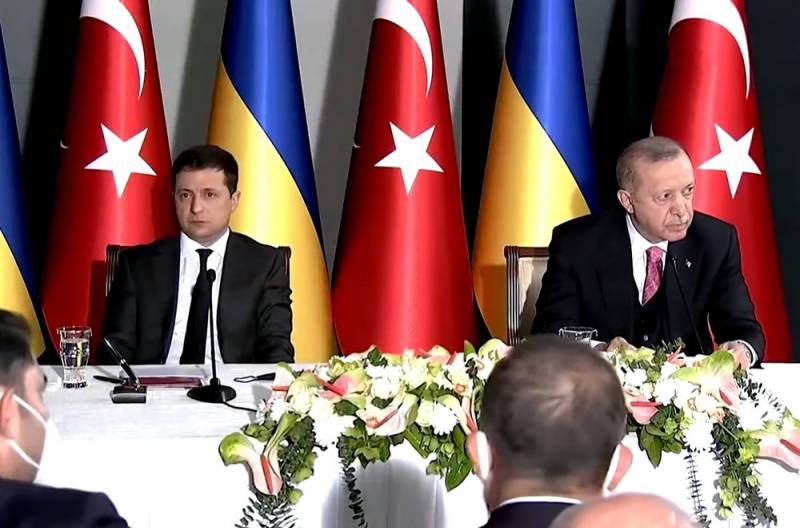 In preparation for a military revenge in Donbass, Ukrainian President Volodymyr Zelenskyy went on a tour to the Middle East, where he visited Turkey and its closest ally in the Qatar region. However, the results of his visit to Istanbul were not as brilliant and unambiguous as official Kiev might have expected. As a result, "Sultan" Recep First made several rather peaceful statements in spite of the militant sentiments of his Ukrainian colleague. What could have influenced the mood of President Erdogan?


The Turkish voyage of Vladimir Zelensky is now compared to the attempts of the Zaporozhye Cossacks to find patronage at the Great Port. The enemy of my enemy is my friend, apparently, this is how the Ukrainian leader reasoned. If Ankara and Moscow are waging a "hybrid war" among themselves in several directions at once, then Kiev will be able to use the neo-Ottoman ambitions of President Erdogan against Russia. However, in reality, everything turned out to be somewhat more complicated than it seemed. Volodymyr Aleksandrovich did not take into account that Turkey would defend not Ukrainian, but only its own national interests.

On the one hand, Ankara formally supported the idea of ​​the Independence joining the NATO bloc. What makes this a formality is that such large European powers as Germany and France are opposed to them, which do not need such problematic "allies" like modern Ukraine in the camp of the North Atlantic Alliance. The bottom line is that this support from Turkey is not worth a damn. The decision will still be made by others.
Another important point was Ankara's position on the legal status of Crimea, which, according to President Erdogan, remains unchanged:

Our principled position is non-recognition of the annexation of Crimea. We have confirmed our support for the Crimean Platform, which is designed to unite the lands of Ukraine. We wish this platform to become a solution for the Crimean Tatars and Ukraine.
This is already more serious. The "Crimean Platform" is a kind of international association, the purpose of which is to put pressure on Russia so that, in the end, it will return the peninsula itself to the Independent. Frankly speaking, it is impossible to imagine how Moscow does it voluntarily.

On the other hand, the Turkish president, at a meeting with his Ukrainian counterpart, made a number of openly conciliatory statements:

First, he considers it necessary to resolve the armed conflict in Donbass peacefully. Nothing belligerent, like how Ankara supported Baku before the start of the war in Nagorno-Karabakh, was not said.

Secondly, I would like to separately touch upon the supply of Turkish-made strike drones to Ukraine. "Sultan" Erdogan stressed that this is a militarytechnical cooperation is not directed against some "third party". Apparently, it was about Russia. Information came to the Internet that Ankara refused to offer to localize the production of Bayraktars in Nezalezhnaya, preferring to supply only ready-made UAVs at $ 70 million apiece in the minimum configuration. Moreover, there is one important condition, which we will discuss below.

Thirdly, Turkey spoke in favor of maintaining peace and tranquility in the Black Sea, clearly implying the intensified military exercises of the NATO bloc and our Black Sea Fleet. The Russian Defense Ministry is deploying ever more powerful weapons in Crimea and on the sea coast, the presence of which in the neighborhood clearly irritates Ankara.

And now it is necessary to say a few words about why President Erdogan did not immediately rush into the arms of Vladimir Zelensky. The fact is that the "sultan" expects something in return, and quite a lot.

First of all, Turkey would like to achieve the provision of political subjectivity to the Mejlis of the Crimean Tatars. Previously, this organization, banned in the Russian Federation, was the main conductor of Ankara's interests in Crimea, but after the reunification of the peninsula with our country, it lost its positions there. Now "Sultan" Redzhep First is seeking territorial autonomy of the Crimean Tatars in the Kherson region. And then President Volodymyr Zelenskyy finds himself immediately between two fires, because on the other hand, Ukrainian nationalists are putting pressure on him, for which it costs nothing to raise him to the pitchfork.

Further, President Erdogan continues to settle scores with his longtime adversary Fethullah Gulen, who is believed to be the organizer of the failed coup d'état in Turkey several years ago. Some of his supporters have found refuge in Ukraine, where religious sects and preachers of all stripes feel extremely at ease. There is evidence that Ankara links the continuation of cooperation on the supply of Bayraktar with the surrender of Gulen's supporters to Turkey. Perhaps Kiev would have met her halfway, but such a political act would cause misunderstanding in the countries of the European Union. Another dilemma.

And finally, Turkey is clearly expecting a breakthrough from Ukraine in signing an agreement on a free trade zone. Negotiations have been going on for a long time and it is very difficult, no one wants to compromise their benefits. But Kiev, apparently, will have to do this if it wants to get more active support from the "Sultan" in its confrontation with Russia.
Ctrl Enter
Noticed oshЫbku Highlight text and press. Ctrl + Enter
We are
"We must beat first": the geopolitical alignment around Russia is continuously deteriorating
Ten "defeats" of Putin
Reporterin Yandex News
Read Reporterin Google News
3 comments
Information
Dear reader, to leave comments on the publication, you must sign in.