Why Moscow is increasing amphibious capabilities in the Black Sea 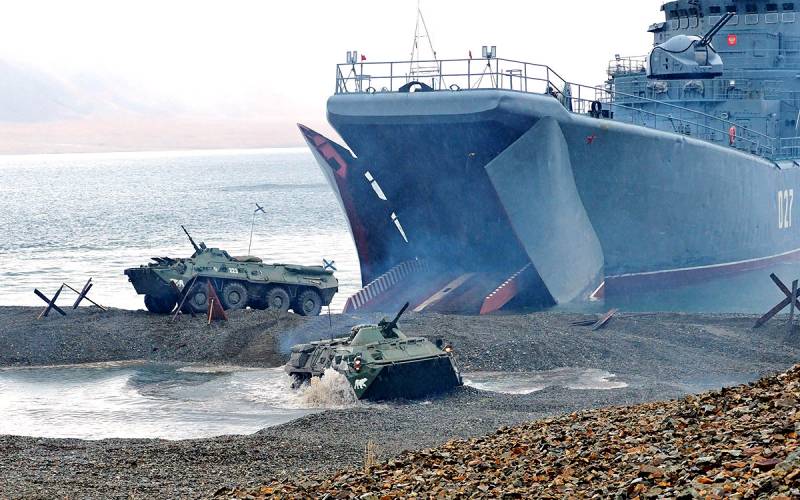 The intensity of the pre-war confrontation in the East of Ukraine only increases daily. The Ukrainian Armed Forces are pulling towards the contact line in the Donbass, and the Russian Armed Forces are moving to the western border of our country, closer to the "Heartland" Nezalezhnaya. Judging by the statements of representatives of the political leadership, the Kremlin would be more satisfied if the defense of the DPR and LPR during a large-scale offensive were kept by the local militia and volunteers, and the Russian army remained in reserve in case of emergency. But it is not a fact that these plans will be destined to come true, and here's why.


The problem is that the Armed Forces of Ukraine are numerically superior to the “people's militia” of the unrecognized republics, and the length of the front is very long. The likelihood that the Ukrainian army will be able to make a successful breakthrough and "bite off" a large chunk of "certain regions" is very significant. The Russian armed forces, concentrated along the border, may simply not have time to stop the offensive potential of the enemy in time. Another problem for Donetsk and Lugansk is that the United States can theoretically take part in hostilities on the side of the Armed Forces of Ukraine. Do not forget that neither Kiev, nor the collective West, nor Moscow itself recognized the independence of the DPR and LPR. The essence of the Minsk format was only in determining the conditions under which the two unrecognized republics should return back to Ukraine.

Then the question arises, what exactly can prevent the two American URO destroyers that entered the Black Sea from launching Tomahawk missile strikes on the militia positions? They have nothing to say to the DPR and LPR, and Moscow will not sink US Navy ships, after all, we are all afraid of the start of the Third World Nuclear War, right? Of course, the probability of direct participation of the American navy in the war for the East of Ukraine is extremely small, but still somewhat different from zero. This is also a kind of "reserve" of Kiev, as well as Russian troops along the Ukrainian border.

The stakes in this game of nerves go up continuously. Yes, the Kremlin clearly would like to avoid direct participation in the war, which is constantly signaling through high-ranking security officials and officials. But the RF Ministry of Defense is obliged to have its own "Plan B" in case everything gets out of control. And in general terms, you can understand how it might look. Let's try to speculate on this topic.

At first, attention is drawn to the fact that an additional grouping of Russian troops is being pulled together not only in the direction of the Southern District, which serves as a kind of rear of the DPR and LPR. Also, the strike group is concentrated in the Voronezh, Bryansk and Belgorod regions. The authoritative British publication Jane's Information Group, specializing in military topics and related logistics, saw the transfer of Iskander-M from the Urals to the Voronezh region. This missile system will be able to hit protected command posts, communications and air defense systems at a distance of up to 500 kilometers. This is a serious argument, which shows Kiev that in the event of an attack on the DPR and LPR, the RF Ministry of Defense can nullify the effect of the “blitzkrieg” of the Armed Forces of Ukraine by counter-offensive with dissecting strikes into the central part of Ukraine itself. After that, all of its vaunted territorial defenses may simply crumble.

Secondly, the Russian military can respond to the APU offensive against the DPR and LPR with a simultaneous strike from the southern flank, cutting off Kiev from the sea. Due to the complete absence of the Ukrainian Navy, our Russian Black Sea Fleet will dominate near the Ukrainian coast. It is unlikely that it will go to Odessa, most likely, it is there that the American destroyers of the URO will stand up as guarantors of the security of this strategically important port, and soon additional forces of the NATO fleet will go there. Two days ago, Kiev announced the start of its own naval exercises and closed all its ports.

A much more probable and realistic target for the RF Ministry of Defense could be Mariupol, one of the most important commercial and industrial cities of Nezalezhnaya. It is located very conveniently for an amphibious operation, on the Sea of ​​Azov, where NATO has been ordered. Currently, there has been a rapid accumulation of specialized landing craft on the Black Sea, which Moscow collects from all of its fleets. Thus, three large landing ships "Korolev", "Minsk" and "Kaliningrad", accompanied by the "Boyky" corvette, are sailing from the Baltic Sea at once. Earlier, regarding the purpose of their visit, we supposedthat these cargo-lifting vessels will be deployed on the so-called "Syrian Express" in response to the excessive foreign policy activity of Turkey. But these three BDKs may well be loaded with marines and armored vehicles and land on the southern coast of Ukraine. And not only them.

Simultaneously with the redeployment of ships of the Baltic Fleet to the Black Sea, ships of the Caspian Flotilla are being transferred. According to the command, this is about a dozen landing boats, accompanied by artillery:

Yesterday morning, the Caspian Flotilla of the Russian Navy began an operational transfer of forces to the Sea of ​​Azov. A diverse detachment consisting of artillery ships and boats, landing and auxiliary boats began the transition from Makhachkala, consisting of at least 10 units.
The flotilla's small missile ships, equipped with Kalibr cruise missiles, remain in place, since they will be able to strike targets in Azov directly from Makhachkala. Landing boats that go to the Sea of ​​Azov are high-speed air-cavern vessels of the Serna and Dugong projects, adapted for landing on the unequipped coast of each Marine Corps company, as well as wheeled and tracked armored vehicles. If events go according to the worst scenario and the militia does not hold out on its own, the Russian troops, "apparently" will have to intervene, and then everything will depend on the reaction of the collective West. It is possible that in the event of a further escalation of the conflict, it will nevertheless have to go further deeper into Ukrainian territory, occupying strategically important points. And Mariupol should be among the priority goals.
Ctrl Enter
Noticed oshЫbku Highlight text and press. Ctrl + Enter
We are
Ukraine from the inside: traitors, curators and those who watch from the Kremlin
Ten "defeats" of Putin
Reporterin Yandex News
Read Reporterin Google News
46 comments
Information
Dear reader, to leave comments on the publication, you must sign in.