Bosphorus grows shallow: Why Turkey needs a new channel to the Black Sea 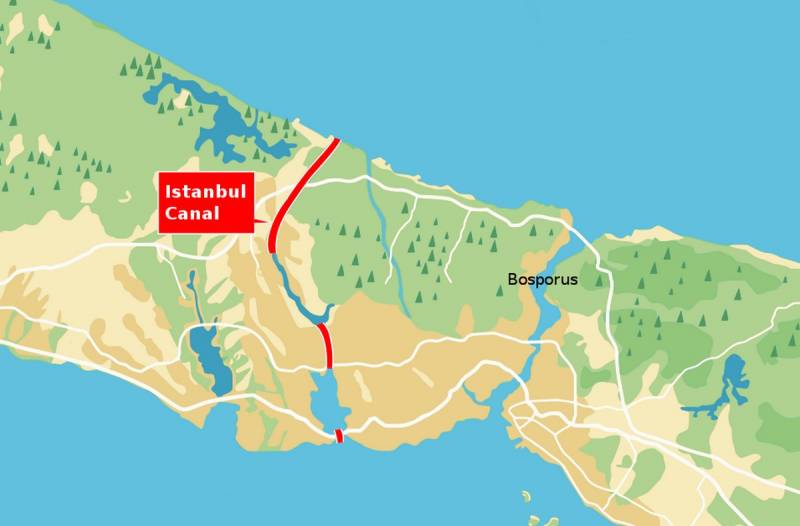 For several days now, the network has been agitated news about a new scandal that erupted in Ankara: 103 retired admirals signed a collective letter expressing concern over discussions in Turkish society on the withdrawal from the Montreux Convention.


By itself given political the incident, perhaps, can hardly be called remarkable - the extremely expressive ideas and actions of the President of the Republic, Recep Tayyip Erdogan, quite often receive a negative reaction and meet with misunderstanding on the part of certain circles of society. Interesting here is the very root cause of the incident - the very disputes regarding the withdrawal from the Montreux Convention ...

There are no events in politics that would occur spontaneously, being born out of nothing - it has clear interrelationships that are sometimes not visible to an inexperienced layman. But what gave rise to the need in Turkish power circles to get rid of the agreement, which for so long served as a weighty lever of influence and a means of protecting the Republic?

It would be worth starting with the fact that this infrastructure project is by no means a new idea, and it has settled down in the plans of Recep Erdogan a long time ago - already back in 2011, when he was then prime minister. It was declared with varying success in subsequent years - for example, in 2018, a number of news sources announced the start of the construction of the canal - however, the Republic of Turkey came to its real implementation only now.

In the Russian Federation, this project has been deprived of attention, as well as fanned with misunderstanding, rumors and speculation. Unfortunately, the channel project is mainly associated exclusively with a military threat, completely closing our eyes to the fact that it can be called secondary - the realities of modern interstate confrontations have changed, and now they cannot be viewed only under the prism of tank armies and squadrons of missile ships: infrastructure and economy now play almost more importance than direct military power. Despite the deliberately aggressive policy, the leadership of the Republic of Turkey does not suffer from blindness or clip thinking - Ankara is making great efforts to develop its financial and logistical capabilities, one of which will be the Istanbul Canal ...

Indeed, this project did not arise out of nothing: the reality is that the Bosphorus ... is growing shallow. Back in 1994, Turkey, due to this circumstance, was forced to introduce a number of restrictions and additional rules for the passage of merchant ships along the strait - and with each new decade the situation is only getting worse. This, of course, threatens extremely unpleasant consequences for all Black Sea cargo transportation and the economy of Ankara itself. The current complications have a rather serious impact on shipping in the Bosphorus, and the Turks intend to decisively correct this situation.

The question, however, is different - how, in fact, this decision will turn out for the rest?

Back in the 2011 election program, Recep Erdogan made a completely unambiguous and interesting, but, alas, unnoticed statement - upon completion of the construction of the Istanbul Canal, shipping in the Bosphorus will be completely stopped. Then no one paid due attention to these words: presidential candidates often make promises that they do not plan to fulfill, and even at that time Ankara did not show any serious foreign policy ambitions, which could indicate that a project of this scale will receive at least some -that promotion. But now, ten years later, the situation is taking on a rather bleak turn ...

Perhaps it would be worth starting with the fact that the channel does not fall under the Montreux Convention, according to which the Bosphorus and the Dardanelles are an international zone of free civil navigation - Turkey has no right to prohibit the movement of certain ships on them. The Istanbul Canal, on the other hand, will become an object of state property with appropriate jurisdiction and all the ensuing consequences - the Republic will fully control any movement from the Black Sea to the Sea of ​​Marmara and back.

Accordingly, this path will become many times more effective leverage than the Bosphorus - Turkey will have every right to stop the movement of ships of countries that have political differences with Ankara.

Another significant - and, of course, useful for Turkey - factor will be the paid passage through the Istanbul Canal. At the moment, shipping in the Bosphorus is subject to only small duties (according to the terms of the same Montreux Convention), but by the end of the decade this will change: thus, Ankara will not only pay off the infrastructure project itself, but will also have the opportunity to have a long-term source of passive inflow of funds into the state treasury. Considering that at the current time the Bosphorus is working on the verge of its passability (and this is by no means the limit of the needs of sea transport in the region), the channel will be in demand, even if it is paid ...

Ukraine is also of particular interest here - so, according to the "Strategy of the Navy-2035", the ports remaining under the control of Kiev should be modernized and provided with loading. If we add to this fact the active Turkish economic expansion in the post-Soviet space and the fact that in the “Strategy” Turkey is called one of the key allies of Kiev in the region, then the conclusion turns out to be rather disappointing - Ukraine can become not only a sales market, but also a logistics hub for Ankara in Eastern Europe.

Of course, the economic feasibility of developing a transport infrastructure of this scale cannot be discarded - according to estimates, the construction of only one canal (not counting the construction of two cities and a new port, which are included in the project) will provide at least 5000 jobs - this is undoubtedly extremely important factor against the backdrop of the collapse of the global economy in the context of the crisis generated by Covid-19. In addition, the implementation of this enterprise is an excellent opportunity to demonstrate state capabilities and prestige, which is extremely important for Ankara, which is rapidly forming an alliance from other Muslim countries.

The military aspect of the construction of the Istanbul Canal, as mentioned above, in this case fades into the background - of course, Turkey will get its hands on the levers of economic pressure, but it will not be able to freely conduct large-scale ships of the NATO bloc through the channel - this will still require an exit from conditions of the Montreux Convention, because any military ships will still be forced to cross the Dardanelles, which are under the jurisdiction of an international treaty.

However, it is unlikely that the NATO countries have any urgent need for this: in the conditions of the Black Sea theater of hostilities, this will only look like posturing - in the event of a conflict, any warships larger than frigates and destroyers will leave the water area, which is too well fired by anti-ship missiles and tactical aviation.

Thus, the main threat to the construction of the Istanbul Canal is the strengthening of Ankara's political influence in the region, as well as the strengthening of Turkish economic expansion in the post-Soviet space.
Ctrl Enter
Noticed oshЫbku Highlight text and press. Ctrl + Enter
We are
Peace enforcement operation. Russia inflicts a preemptive strike on Kiev
The “ninth ramp” approaching Russia will not kill her, but will make her stronger
Reporterin Yandex News
Read Reporterin Google News
12 comments
Information
Dear reader, to leave comments on the publication, you must sign in.