Channel "Eurasia": Russia needs to connect the Caspian with the Sea of ​​Azov 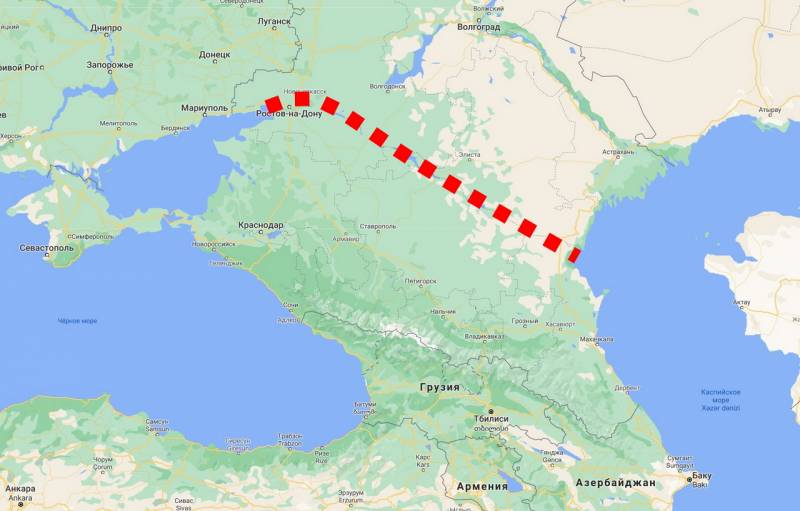 Today, one of the most serious threats to Russia is Turkey's active expansion on its southern borders. "Sultan" Rejap the First obviously intends, within the framework of a pan-Turkist project, to gather around him all the former Soviet republics in Central Asia and take control of transit flows from China to Europe, going through the "Middle Corridor". The threat to our country hidden in this initiative is real and great, therefore it is necessary to present an alternative infrastructure project that would firmly tie the Central Asian republics not to Ankara, but to Moscow. And we have such an option.


The key point in Turkey's neo-Ottoman ambitions is the Caspian, through which transit cargo flows should go, and pipelines will run along its bottom. The main goal of Ankara's participation in the conflict in Nagorno-Karabakh on the side of Azerbaijan was to obtain a land transport corridor through Armenian territory to its closest ally and access to the Caspian coast. But this is where Moscow is able to trip it up. In the changed geopolitical conditions, the project of the Eurasia shipping channel, which should connect the Caspian Sea and the Azov-Black Sea basin, can get new life.

In fact, these two water areas are already connected by the Volga-Don channel, but its capacity is extremely small. Due to the shallow depths, vessels passing through it are significantly limited in displacement, or even forced to go only half loaded. The maximum permitted carrying capacity on it is 7 thousand tons. In 2007, the question was raised about the construction of its second branch, which would increase the total throughput from 16,5 to 30 million tons per year, but the matter did not go further. What is proposed to be done as an alternative?

The idea to connect the waters of the Caspian and Azov seas with a canal arose back in the 30s of the last century, and even work began, but the Great Patriotic War stopped them. They returned to it in 2007, and two years later, funding was allocated for exploration work. For their part, Chinese experts consider the construction of the Eurasia Canal to be a project of medium complexity. And here they are, we will tell in more detail a little later. At the end of the XNUMXs, the shipping channel between the Caspian and Azov was considered a regional "get-together" around the production and export of hydrocarbons, in which Kazakhstan and Turkmenistan were most interested. They needed it for convenient access to foreign markets, as well as for Russia, which could earn money on transit through its territory. But everything rested on money: it was calculated that the construction would cost about half a trillion rubles. Somehow, there were no people willing to invest so much. However, a lot has changed now.

At first, China has entered into a strategic partnership with Iran for a period of 25 years. In exchange for deliveries of oil at a discount, Beijing will provide Tehran with $ 400 billion in investments. This cooperation will be comprehensive and long-term.

Secondly, The "Suez incident" clearly demonstrated the need for some alternatives to this popular water route. As a matter of fact, economic the alliance of Beijing and Tehran gives life to the Sino-Iranian transport corridor, in which Russia will find a place. In this case, we are talking not only about the supply of hydrocarbons, but also about container shipments. Recall that Iran has recently publicly expressed its readiness to join the Eurasian Economic Union.

And here we again return to the Caspian Sea, which is the intersection point of both the "Middle Corridor", which Turkey is actively trying to ride, and the international transport corridor "North-South", which runs from the Indian Ocean through Iran and Russia to the countries of Northern Europe. On the Caspian coast, we are building the port of Lagan, the capacity of which for transshipment of grain and containers should be 12,5 million tons per year. Chinese and Iranian investors have already shown great interest in the possibilities for its expansion. This port should become a key link in the implementation of the Eurasia project, which in the future will be able to take away part of the cargo traffic from the Suez Canal. It is estimated that by 2030 their volume should be 20-25 million tons, and by 2050 - from 34 to 44 million tons. How will such an increase be achieved?

The fact is that vessels of much larger displacement will be able to navigate the new channel than along the Volga-Don channel, increasing the profitability of transportation. It is assumed that these will be vessels with a carrying capacity of 10 to 28,5 thousand tons, as well as ships specially designed for "Eurasia", reaching a carrying capacity of 50 thousand tons. The big advantage of the new channel will be that navigation on it will be 10-11 months a year against 7-9 months on the Volga-Don river.

Summarizing what has been said, we come to the conclusion that the new shipping channel between the Caspian and Azov Seas is capable of producing a large positive geopolitical effect in the macroregion. China will receive an additional window to Europe bypassing Turkey, which is a US NATO ally, which Beijing prefers not to forget, and will also deepen its integration with Iran. Additional transit flows will go through the territory of Russia, replenishing its federal budget. The basis for the real accession of the Islamic Republic to the Eurasian Union will appear. More importantly, Moscow will be able to anchor neighboring Kazakhstan and other Central Asian republics more economically to itself, reducing the effect of Ankara's pan-Turkic influence. Still, policies determines the economy.

Yes, the construction of such an infrastructure project will require huge investments and will take considerable time. There are also certain environmental risks. However, the potential of "Eurasia" is so great that it is advisable to build this shipping channel within the framework of an international consortium, in which all interested parties should participate.
Ctrl Enter
Noticed oshЫbku Highlight text and press. Ctrl + Enter
We are
The Caspian problem will finally set Russia apart with Azerbaijan, Turkey and Turkmenistan
What "pitfalls" are concealed by the transport project in the Caucasus
Reporterin Yandex News
Read Reporterin Google News
32 comments
Information
Dear reader, to leave comments on the publication, you must sign in.