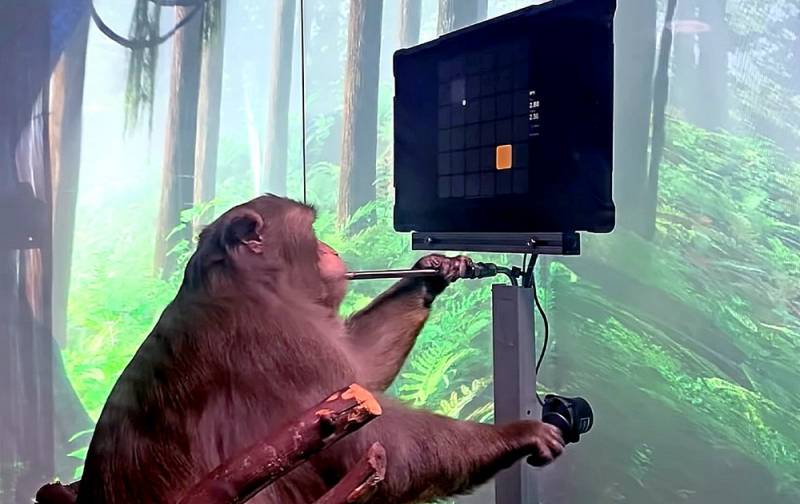 For the first time, specialists from the Neuralink startup, owned by Elon Musk, clearly demonstrated the success of their project. The company has published a short video demonstrating the capabilities that the monkey has gained after implanting a chip in its brain.


Recall that the goal of the developers is to create a miniature chip implanted in the brain that will allow people with disabilities to use electronic devices. In particular, a person with paralysis will be able to control a PC or smartphone with literal power of thought.

As for the experiment, in the beginning, a monkey named Paige used the joystick to move the cursor after the squares on the display. As a reward for her “hard work,” she received a banana smoothie.

In this simple procedure, the neural data from her brain was transmitted to a computer over a wireless network. The resulting information was then processed by a decoding algorithm that simulated the relationship between the repetitive sequence of neural activity and the movements performed by the monkey.

After the chip's decoder algorithm was fully calibrated, the specialists from Neuralink turned off the joystick and turned on the Ping-Pong game. Despite the fact that the manipulator was disconnected, the monkey never missed the ball, as it unconsciously controlled the cursor through its neural activity.

Our monkey will be on Twitch and Discord soon. Ha ha
- wrote in his Twitter, inspired by the success of Elon Musk.

It is worth noting that the company has really achieved an incredible result. Indeed, literally last year, Neuralink could only record changes in the activity of the brain of pigs, which were implanted with a chip. Now, the monkey is playing Ping Pong.

The developers added that the paralyzed person will not be able to control the joystick. However, he does not need this, since for training the algorithm it will only be enough to clearly represent the corresponding movement.
Ctrl Enter
Noticed oshЫbku Highlight text and press. Ctrl + Enter
Reporterin Yandex News
Reporterin Yandex Zen
2 comments
Information
Dear reader, to leave comments on the publication, you must sign in.