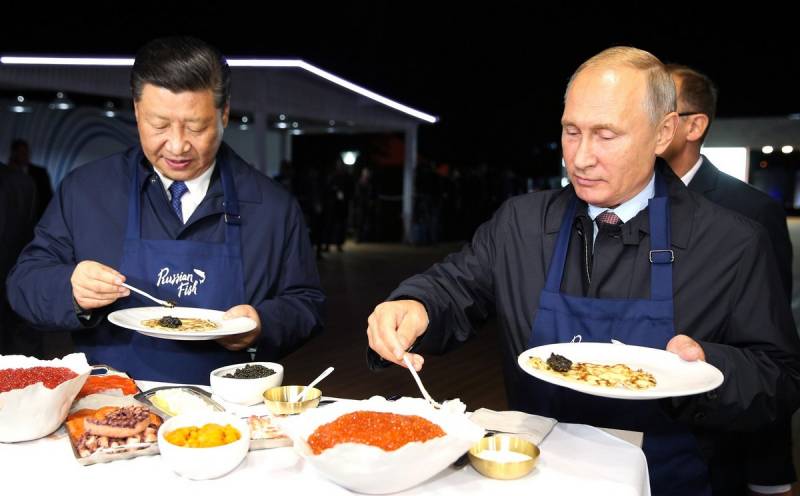 A new round of heightened tensions between the United States and our country makes us think about many things. And, in particular, about whose support Russia can count on in its confrontation with the "world hegemon" who does not want to give up its positions, which is becoming more and more tough. According to the majority of domestic experts in the field of geopolitics, China could become the most likely and acceptable ally in this situation.


However, in relations between Beijing and Moscow, not everything is as smooth and unambiguous as proclaimed from the high rostrum by the officials of both countries. Let's try to figure out - what can Russia really count on in this alliance and what "pitfalls" for it can it conceal in itself?

There is a relationship ... But at what level?

Many rushed to call the recent visit to the Celestial Empire of Russian Foreign Minister Sergei Lavrov a "breakthrough" or at least a "big step forward" in the rapprochement of the two states that have a common problem with the capital in Washington. Indeed, a lot has been said - both about the abandonment of the dollar, and about "the earliest possible search for an alternative to the international payment systems controlled by the United States", as well as about the opposition to sanctions for everything that is possible and impossible, which the Americans have recently begun to "stamp "Already downright conveyor method. Nevertheless, after returning to his native land, Lavrov said several rather discouraging things. First of all, there will be no full-fledged military alliance between Moscow and Beijing, which is so feared in the West and which some people are talking about the need to create in our country. The country's chief diplomat said that "we do not need classical military blocs like NATO." And what you need?

At the same time, Lavrov did not fail to intriguingly assure that "the relations between China and Russia are in a sense closer than those of the members of the North Atlantic Alliance." To tell the truth, it sounds like something ... After all, in the end it is not about matters of the heart, but about the prospects for cooperation between the two powers, capable of jointly fairly “reshaping” the current geopolitical picture of the world. The words of the Foreign Minister regarding the fact that Moscow and Beijing are not going to give a consolidated response to certain sanctions and other similar measures taken by the West are much more understandable and therefore even more unpleasant. This already looks like a very big omission, especially in light of what a wonderful shortening the Chinese comrades were able to give to the "world community" quite recently, which took it into its head to "educate" them for the "oppression of the Uighurs."

The joint indignation of Beijing and Moscow at the "unilateral" and "unmotivated" restrictions imposed on both countries is, of course, remarkable. Diplomatic demarches such as, for example, the statement made by the official representative of the Chinese Foreign Ministry Wang Wenbin that in the Celestial Empire all issues related to Alexei Navalny are considered a purely internal affair of Russia and strongly condemn the interference in this situation by “external forces ". However, we are now talking about something else. The main thing in China's reaction to the fanning of hysteria around the "Uyghur question" is perhaps not even the counter-sanctions introduced by this state against a number of not only officials, but also entire institutions of the European Union. Much more important (and much more painful for the West) is the friendly reaction that followed from the Chinese society. Its representatives, from public figures to the most ordinary citizens, hit corporations that decided to play the "fight for human rights" on the sick person. That is, according to the wallet. A total boycott of such global brands as Adidas, Nike, H&M announced in the Middle Kingdom brought them colossal, billions of dollars in losses, and, in addition, brought down the stock quotes of these companies' shares.

Let's imagine for a moment that China and Russia will do something similar synchronously and in a coordinated manner. Why nothing of the kind (judging by Lavrov's words) is even being discussed is deeply incomprehensible. Recently, Beijing, which for a very long time adhered to maximum restraint and moderation in its own foreign policy steps even in the most unpleasant situations, began to act much more actively, assertively, and sharply. Is Moscow not ready to support such a “game of raising rates,” or does Beijing not want to add to its problems with Washington the intervention in the Russian-American showdown? It is difficult to say something definite here, but one thing is indisputable - sooner or later both countries will most likely have to start supporting each other in this confrontation in more effective ways than now.

However, much more pressing, according to many analysts, remains the issue of cooperation between Russia and China in economic area. And here everything is even more complicated. Not too much zeal in rapprochement in this direction, shown by Beijing, gives rather weighty grounds for criticizing the very idea of ​​Russian-Chinese cooperation both to its open opponents and to quite numerous skeptics. Indeed, according to the official data of the domestic Central Bank, the volume of direct investments in our economy from the Celestial Empire in the first three quarters of last year fell by more than half - from $ 3.7 to $ 1.8 billion. In comparison with 2014, we have a drop in two and a half times. Our Chinese partners today account for less than half a percent of the total volume of foreign investments in the domestic economy! The fate of such large-scale projects as the second stage of the Power of Siberia gas pipeline and the Eurasia railroad remains unclear (in terms of Beijing's share in them). The Chinese comrades are not at all averse to using them - but, let's say, they are in no hurry to allocate funding.

There is one more not very pleasant moment - according to official data, only one financial institution of the Middle Kingdom - Bank of China - is connected to the SPFS payment system, which is considered to be a Russian alternative to SWIFT (and indeed it is, in fact). Agree, against the background of the appeals voiced in Beijing by Mr. Lavrov, this does not look very good ... Meanwhile, as it became known recently, the Ministry of Finance of Russia, following the example of the Central Bank (which quadrupled the share of the yuan in its international reserves in 2018-2020), transferred to the national currency of the PRC at least 15% of the funds of the National Wealth Fund.

At the same time, according to available data, last year's trade volume in the yuan-ruble corridor amounted to no more than $ 3.3 billion, with a total trade turnover between the countries of almost $ 108 billion. Doesn't sound like "ditching the dollar", does it? Of course, in the field of economic cooperation between the two countries, there are definitely positive shifts - for example, a twofold increase in railway traffic from China to Europe along our highways. However, we have to admit that everything turns out to be rather one-sided and far from being as large-scale as we would like. Meanwhile, some analysts are concerned about the conclusion by Beijing and Tehran on March 27 of this year, a "comprehensive" agreement on strategic partnership for a period of 25 years. This document, in particular, provides for the prospect of Chinese investments in the industry and infrastructure of Iran in the amount of at least $ 400 billion. Agreed within its framework and militarytechnical cooperation.

Thus, there is a danger of a significant ousting of Russian energy resources from the Celestial Empire's market, since Tehran intends to pay for all its investments, both in the peaceful and defense spheres, with energy resources, with the sale of which it is experiencing colossal problems due to Western sanctions. Without a doubt, oil and gas will be supplied to China at a very significant discount, the price competition with which domestic hydrocarbons are unlikely to withstand. Here we can only hope for the almost bottomless needs of this country for energy resources, which, perhaps, no exporter alone can fully satisfy. True, one should not forget that recently other suppliers from the Middle East, first of all, Saudi Arabia and Qatar, have also "targeted" the Celestial Empire.

In any case, for all the urgency of the economic aspect of Russian-Chinese cooperation, at the moment geopolitics is still coming to the fore. Moscow is on the verge of severing diplomatic relations with Washington (which the latter, judging by the actions of its authorities, is completely satisfied with), the prospects for establishing a dialogue between the Celestial Empire and the American side also do not inspire the slightest optimism. It is extremely important for both countries at this moment to decide whether they will respond to hostile attacks by coordinating their policies in one way or another, or everyone will be for himself, content with mutual tacit approval and the most general declarations, in which only the most general meaning will echo. There is a hope that willy-nilly, but they will have to unite. In any case, there are some encouraging signals. For example, the sharp statement by the head of the domestic Security Council Nikolai Patrushev, who directly accused the United States of developing biological weapons near the borders of our country, was actively supported by the Chinese Foreign Ministry. Its official representative Zhao Lijian demanded that the Americans report "on the experiments carried out in their military biological laboratories." At the same time, he more than transparently hinted that traces of the origin of the coronavirus should be sought in the United States, and not in China.

Such a consistency in the positions of Moscow and Beijing is good news. But in order to finally start to reckon with us seriously, it should be manifested much more often and more decisively, and literally for any reason. If the alliance of our countries does not reach a completely new qualitative level in the very near future, it will only be necessary to state that the United States has every chance of gaining the upper hand, once again applying the old world principle to its two main geopolitical opponents: “divide and rule ".
Reporterin Yandex News
Reporterin Yandex Zen
32 comments
Information
Dear reader, to leave comments on the publication, you must sign in.