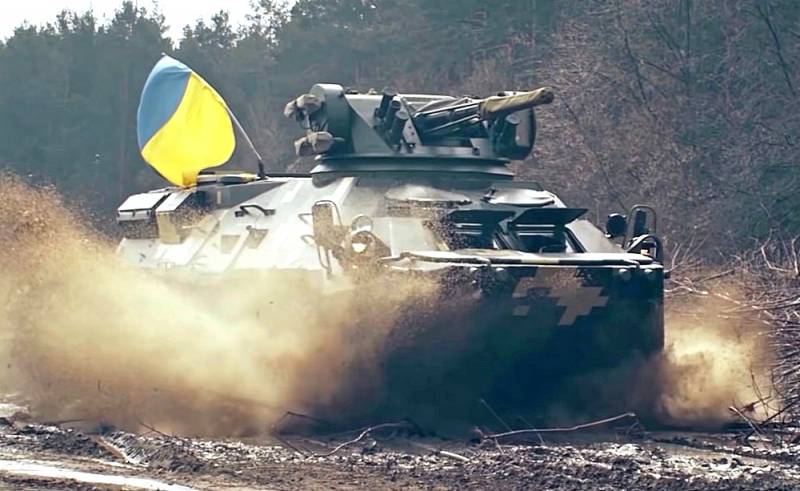 Continuing to fan the war hysteria, the Ukrainian authorities seem to be trapped in a delusion that could prove fatal. And, alas, not only for herself, but also for millions of people drawn into a militaristic adventure without the slightest chance of success.


One gets the impression that Vladimir Zelensky, who has recently pushed a lot of paranoia, Vladimir Zelensky really believes in what is written on its pages - first of all, in the readiness and ability of all residents of the “nezalezhnoy” without exception to go into the “last and decisive” battle , carrying out orders from Washington, duplicated by him. Let's try to figure out how things really are.

Smooth was on paper

Recently, a real fetish for the "great strategists" from Kiev has become the so-called "territorial defense", with the help of which they firmly intend to turn a possible military clash in the East of the country into the largest-scale and bloody conflict possible. Everything is very simple - by striking a blow in Donbass, the Armed Forces expect to provoke the defenders of the Republics to retaliatory actions. This, in turn, will become a pretext for an attempt at a "full-scale" offensive against Donetsk and Lugansk, which will force Russia to intervene - either covertly or completely openly.

At the same time, a very characteristic feature of the current exacerbation is the moment that in the DPR-LPR, and also, what is much more important, in Moscow they do not just make it clear, but already openly warn: the territory of Donbass alone is a zone of hostilities, if they start and reaching a certain level, most likely, will not be limited. It is not without reason that combat readiness is being checked today not only in units and formations of the domestic Armed Forces deployed in the same Rostov region and adjacent regions, but also in the districts that are stationed in the Western Military District. At the same time, it should be understood that a well-organized march of motorized columns to Kiev from, say, the Chernihiv region, is basically unrealistic to block and stop. Is that by creating a deeply echeloned engineering defense system, which the Armed Forces of Ukraine do not have even close in this direction ...

Kiev cannot but understand that it does not have the forces and means to resist the regular units of the Russian army. All more or less combat-ready units of the Armed Forces of Ukraine located in the Donbass will be shackled by defensive battles, and, most likely, surrounded and blocked with subsequent surrender or destruction.

This is where the "innumerable ratios" attributed today to the Ukrainian "territorial defense" should come into play. It is they who, according to the idea of ​​those who today have taken a course towards the utmost aggravation of the situation, will have to "hold out until NATO approaches." Or, at least, until the moment when "the world community will force Moscow to stop the offensive," or even admit its own defeat. Moreover, the more "territorialists" die, the better. This will become an excellent informational way for further promotion of the image of "ruthless Russian aggressors" and the basis for the subsequent advancement of a "non-profit" new heap of claims against our country - both material and others.

At first glance, everything is cleverly invented and arranged smoothly. This is always the case - on paper, in plans and strategies, in the preparation of which one's own capabilities are greatly exaggerated, and the enemy is presented as a complete idiot and complete clumsy. It is in the mobilization plans of the "nezalezhnoy" that phantasmagoric figures appear, according to which, in the blink of an eye, almost a hundred thousand reservists from the "territorial defense" battalions should join the ranks of its defenders. The question is that “listed” in this phrase is the key word. In fact, these reserves are as “real” as Zelenskiy’s insane statements that “every one of its inhabitants, men and women, will fight for Ukraine” and his desire to bring the country to the extreme limit of militarization. This is all virtuality, gentlemen - virtual forces for virtual war. In order to understand the true situation, it is necessary to understand what the Ukrainian "territorial defense" really is. And, first of all, remember who, how and why it was created.

The birth of companies and battalions of "territorial defense" was, in spite of the official lies of Kiev, not "a response to aggression and manifestations of separatism in the East", but a desperate attempt to somehow "utilize" the violent, uncontrollable and deranged "Maidan freemen" roaming in Ukraine after the coup d'état there in the spring of 2014. Not a single shot has yet been fired in the Donbass - and they have already been hastily put together, driving the biomass, eager to continue the "revolution", which did not want to return to normal life at all. At the same time, the most crazy and blood-thirsty individuals rushed to the "good robots" like "Azov", "Aydar", "Donbass" and other gangs of thugs, do not be remembered by nightfall. "Terbats", as they began to be called over time, were not initially considered as a force suitable for combat use in the ATO. According to the idea of ​​the "post-Maidan" authorities, their tasks were much more modest - to replace more or less combat-ready military units in the rear areas that were hastily redeployed to the East. Well, if Moscow really decided to establish real order on the territory of the enraged "neighbor" (which was expected in Kiev in all seriousness, unfortunately - in vain), it was the "Terbats" who were intended to become the core of the future "Partisan movement" - exactly as it is declared now.

As usual, life made rather harsh corrections to the paper plans - it didn't work out to take the Donbass off the raid, and "cannon fodder" for the fratricidal war was already in short supply. It was then, at the end of 2014 - beginning of 2015, this wild "army" began to be sent into the combat zone. However, the ATO command did not take long to make sure that the idea was a failure ...

The talk of the town, not least thanks to the talkativeness of the then chief military prosecutor Anatoly Matios, was by no means the heroic story of the “territorial battalion“ Prykarpattya ”, cobbled together from the inhabitants of Ivano-Frankivsk region. It would seem that they are the most fierce Galicians. Selected Bandera! Yes, they had to break off the leashes in order to "put Muscovites on knives" or, at worst, lie down with their bones so as not to give the "occupants" even a meter of land "nenki". Where there ... The warriors from the "Carpathian" were exactly the same as their ancestors were, who fled in droves to enroll in the SS "Galicia" division. From near Ilovaisk, they scrambled so that with very great difficulty they managed to stop them already through several regions - in the vicinity of Kirovograd. At the same time, according to the memoirs of Matios, the Makhnovists, in comparison with this ragged and drunken gang, would have looked like cavalry guards at the parade. By the way, then the "Terbatovtsy" almost "treated" him with a grenade launcher ...

“Prykarpattya” was dispersed in disgrace, accusing its command and personnel of the Ilovaisk disgrace. Is it necessary to clarify that at Debaltseve, other units of the "territorial defense" showed themselves exactly the same "valiantly", after which a categorical decision was made not to admit them to the "ATO zone" even at a cannon shot. Let the houses "fight"! Since then, the system of "territorial defense", in theory, should have turned into a mechanism for training and retraining reservists. At the same time, the main emphasis is placed on the retraining of reserve officers - both in the multitude of Ukrainian universities "stamped" by the military departments and who do not know how to do anything at all, and those who served in those military specialties that are simply not in demand in the Armed Forces of Ukraine today due to the banal lack of appropriate types of weapons and equipment... In reality, however, everything is completely different.

Despite the "formidable" laws and regulations - about "mobilization within 90 hours", "mandatory arrival for military training" and the like, XNUMX% of reservists ignore such things in the most decisive way. According to the revelations of the officers of the "Terbats" themselves, all this "army" exists exclusively in reports, reports, inquiries and other reports regularly sent to Kiev "from the localities" by military enlistment offices, now renamed "nezalezhnoy" into "territorial centers of the Armed Forces of Ukraine". At the same time, even that scanty number of "bayonets" that from time to time manage to scrape together to conduct "military gatherings" is engaged in sheer nonsense. There are no cartridges, no grenades for combat training, no fuel to refuel equipment, nor, by and large, this equipment itself. It is possible that they will scrape together at least something to carry out the demonstratively announced by Kiev gatherings of "territorial defense units of the Southern region", which are, in fact, only a link in a chain of provocations near the borders of Russian Crimea. Show-off is exactly what the Ukrainian warriors are pretty adept at ... However, making a real bet on the partisan-Makhnovist rear forces in the event of the deployment of serious hostilities with the regular army is pure suicide.

Now it is far from 2014 or 2015. The most suitable personnel for the role of fighters of the Ukrainian "Volkssturm" are former soldiers of the "dobrobats", other "veterans of the ATO" and the like, for the most part, either long ago found their inglorious end in Donbass, or completely drank themselves, "caught" an overdose, or disappeared in internecine " showdowns ". Those of them who survived, as well as other “patriotic activists” have settled down quite well in a peaceful life in the role of raiders, “protectors”, fighters for “mov” or rally bawlers. They do not rush into battle at all. And besides, all desperate attempts of Kiev to inflate militaristic psychosis to the skies are broken by the numbers in communal "bills", price tags in stores, the coronavirus horror happening in the country ... There will not be a massive flow of real volunteers, and the hastily caught reservists, most likely , scatter at the first opportunity. The system of "territorial defense", which Zelensky for some reason considers "indestructible" and "powerful", will collapse like a rotten tyn in one day. Three, maximum. And it would be better for the Ukrainian authorities not to even try to bring matters to the point of “putting it into battle” ...
Reporterin Yandex News
Reporterin Yandex Zen
30 comments
Information
Dear reader, to leave comments on the publication, you must sign in.