Ukraine is a danger that no one wants to notice 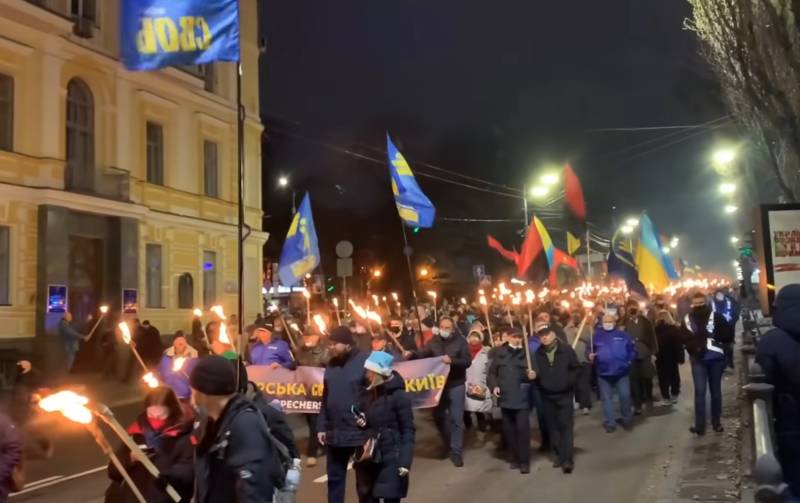 It is quite natural that during the extreme aggravation of the situation around Donbass and the emergence of a real danger of a full-scale military conflict between Moscow and Kiev, which is being pushed into a suicidal adventure by its American "partners", some current moments of what is happening in the "non-existent" are in the background.


And, nevertheless, if we assume that everything that is happening now is not the beginning of a war, but only a series of regular provocative demarches "on the brink of a foul", we will have to admit that behind the uproar we are missing something very important and much more dangerous than the current rattling weapons. What exactly? Let's try to figure it out.

Burn out the "Russian world"

While in the East of the country the cannonade is thundering and the trucks of the tank formations hastily pulled together are thundering, in safe Kiev local deputies are enthusiastically engaged in lawmaking "on the topic of the day." In the Verkhovna Rada of Ukraine, a bill No. 5259 has been submitted, according to which "propaganda of the Russian world" will be subject to criminal liability in the country. In fact, it is proposed to introduce changes in only one, already rather controversial article of the Criminal Code No. 436-1, which deals with "propaganda of communist and national socialist totalitarian regimes." At the same time, which is typical, problems for people, even jokingly using Soviet symbols, happen in Ukraine regularly, but fans of the SS division "Galicia", arranging costume performances in the form of the Wehrmacht and SS, as well as propagandizing "heroes" who faithfully served the Third Reich , The law does not notice point-blank.

This is not to mention the members of the "volunteer battalions" using Nazi symbols recklessly. The fact that they now want to add "propaganda of the Russian world" to the article mentioned above is not surprising. After all, the authors of the bill, MPs Oleg Dunda and Sergei Aleksiychuk (both, incidentally, from Zelensky's party) argue that the idea against which they call for an irreconcilable struggle is not just a “Russian foreign policy strategy” that is used to “collect land” and “ returning to Russia the status of a superpower ”. They literally and clearly declare the "Russian world" ... "one of the forms of Nazism"! The deputies consider the “Orthodox religion and the Russian language” to be the main tools with which the insidious “Russian world” is spreading its “pernicious influence”. It is against them in Ukraine, as you might guess, that if the new law is adopted, what is called a war of annihilation will be waged.

At the same time, the following actions are declared criminal: "the use of religious rhetoric for manipulative purposes", in particular - "for the propaganda of the thesis about the inviolable spiritual unity of two fraternal peoples - Russian and Ukrainian." Also - the propaganda of "the values ​​of the Eastern Orthodox civilization", since this concept is "artificially created by Russian political strategists" and is nothing more than a "mythologization of history." Any attempt to "organize events and projects" aimed at showing that Russia and Ukraine have a "common spiritual heritage, genealogy and future" is certainly subject to prosecution and punishment. In general, at least something in common ... And if someone thinks that in this case we are talking about some symbolic punishments for symbolic "offenses", then they are deeply mistaken. In the same article 436-1, even if its effect is not strengthened, in addition to completely phantasmagoric fines, there are already such sanctions as imprisonment for 5 or even all 10 years "for the production and distribution of communist symbols." Now they simply add to it the "symbolism of the Russian world", under which, in principle, you can "fit" everything, up to the matryoshka, the bear and the balalaika - and the job is ready. Moreover, the criminal ...

However, the most important thing is not even this. If the law is adopted, then the Ukrainian Gestapo, the SBU, will be charged with overseeing its implementation. According to his denunciation to the NSDC, which now plays the role of the "main headquarters" in the fight against all "pro-Russian" and "opposition", any public or политическая organization, any media, any church community. Moreover - with the complete confiscation of property. In Russia, they talked for a long time about the "danger of the formation of a fascist state in Ukraine." I'd like to ask: is this already it, or is it still a "danger" ?! Will no one see the light again?

The practical goals of the insane creativity of the gentlemen Aleksiychuk and Dunda (clearly fulfilling a political order coming from “above”) are extremely clear at first glance. First of all, the final cleansing of not only the informational and political “field” of Ukraine from everything that has at least some shadow of “pro-Russianness”, that is, it does not yell “Moskals at knives!”, Going into convulsions and profusely blowing foam. Liquidation, and complete and final canonical Orthodoxy, which today is present in the country exclusively in the form of the parishes of the Moscow Patriarchate. All the games with the "tomos", and, not to be remembered by nightfall, the OCU, led practically nowhere - those of the Ukrainians who have not yet lost their Faith continue to go to the canonical churches, completely ignoring the "patriotic" hysteria. Here - either so, or not at all. In addition, the vileness packed in nationalist slogans opens up a lot of opportunities for lawlessness of any kind - from the removal of unwanted candidates from the elections to the most banal raider seizures of companies and enterprises. They threw “seditious” leaflets into your pocket or office or, God forbid, a portrait you know who - and welcome to the bunk. The SBU is going overboard.

And this is, again, only part of the global strategy that has been implemented in Ukraine since 2014, but right now it has begun to be implemented at a downright accelerated pace. Vaccination of the population, as well as all other measures to combat the coronavirus pandemic, the local authorities fail one after another with a bang, not only because of their own mediocrity and thief. This is also one of the points of the plan. The disease affects and kills, first of all, older people. Apparently, Kiev is not going to inoculate them at all, even with those dubious drugs that are at its disposal.

Why are those who are now over 50, 60 and older citizens so objectionable to the "post-Maidan" authorities? The fact that they will have to pay pensions - someone right now, and someone soon? Yes, this too. However, this problem is solved in a purely Ukrainian way - “simply and elegantly”. Let me remind you about the statement of the current prime minister of the country, Denis Shmygal: in 10-15 years there will be no pensions. However, sane experts say that the head of government lied: the collapse of the pension system will come in 5 years, maximum. Be that as it may, but there is a deliberate genocide, the destruction of a very specific category of citizens. And the explanation here is simple - it is those who are now 50 or more years old still living at a conscious age in the USSR and in many cases are carriers of the corresponding, if not ideology, then at least a life position that decisively contradicts the Nazi ideas cultivated by Kiev.

These people stubbornly do not want, cannot and will not see Russian enemies, "occupiers", "aggressors". They are trying to educate their own children and grandchildren in the same spirit, and therefore are the most dangerous "agents of the Russian world." No, of course, in any age category there are different people - I give the most generalized picture and it is exactly that. At present, a monstrous fooling of the young generation of Ukrainians is taking place. The danger can be underestimated only by those who do not know what monstrous game and lies, what animal hatred for everything Russian is literally hammered into their minds and souls in schools, universities, colleges and colleges. I know ... The process of preparing the Russophobic "Hitler Youth" is in full swing, and there is no real opposition to it.

With the adoption of bill # 5259 (and it will be adopted - not he, so another similar one, and not the fact that it is not even tougher), the last centers of opposition to the transformation of Ukraine into a huge totalitarian sect will be destroyed, the "religion" of which is hatred of Russia and everything Russian. If this process is not stopped as quickly as possible (and, alas, it is only possible to stop it from the outside), then the reckoning will be terrible. Today, according to official figures, the population of the "nezalezhnaya" is a little over 40 million people. The figure, of course, is overestimated, besides, it is necessary to discard from it young children, decrepit old people, invalids ...

Over time, it will, again, decrease. However, even dividing it in half, we will get - in 10, 20, 30 years, 20 million Russophobic fanatics burning with malice and hatred. These will no longer have to be caught by force and dragged to the military registration and enlistment offices - they themselves will strive to kill the "damned Muscovites." The West is completely repeating its project to create a ram-state aimed at the heart of our Motherland. The only difference is that, keeping in mind their own past mistakes, gentlemen Anglo-Saxons recreate it in a much weaker, but 100% controlled version. After all, weapons and machinery you can put it. The main thing is the insane and unreasoning "cannon fodder", and it is precisely this role, apparently, Ukraine has taken for itself entirely and completely.

Someone may say: “So what ?! Let them try! And there will be nothing like that ... ”I will not argue. Let me just remind you: Germany did not become the Third Reich in one day and not in a year. And the number of the Wehrmacht on June 22, 1941 was also not 100 million. "In total" 8 and a half, of which a little more than 4 and a half million were thrown against the USSR. How much we lost in that war, I think everyone remembers? The attempts of our country to coexist with a certain entity, at the state level, is trying to declare a deadly struggle with the "Russian world" as its goal and mission, can hardly be called a far-sighted and reasonable policy. The situation is rapidly evolving from bad to worse. Today tanks rumble along the border and no one wants war. However, tomorrow, and even more so the day after tomorrow, everything will become even more complicated and even more dangerous.
Reporterin Yandex News
Reporterin Yandex Zen
89 comments
Information
Dear reader, to leave comments on the publication, you must sign in.