"Shahid Soleimani": Iran changes the balance of power in the Persian Gulf 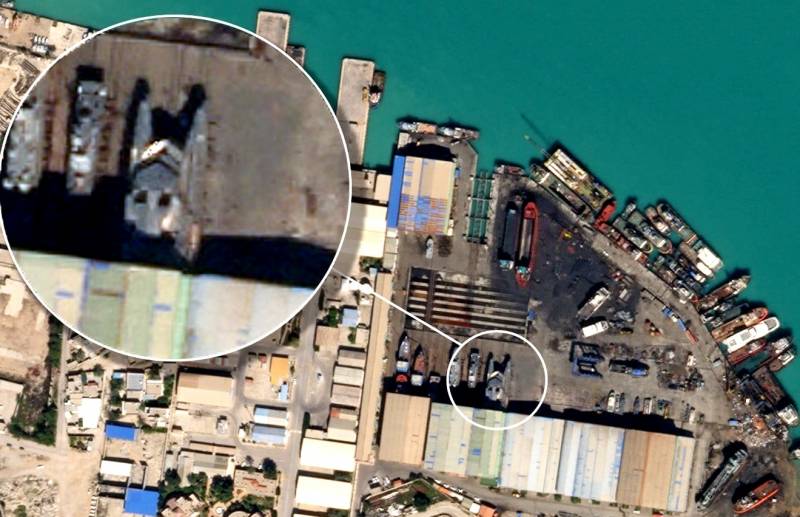 The Persian Gulf has been a point of confrontation between Washington and Tehran for several years: a real cold war is steadily going on in its waters, which threatens to escalate into a hot one ...


Previously, Iran viewed as an asymmetric response to the naval threat from the United States and its allied forces, a flotilla of fast boats, both patrol and missile. Such means, of course, are not at least in any way sufficient for the conditions of real hostilities, however, they performed their main task qualitatively and quite qualitatively - they ensured the regular presence of Tehran's forces in a strategically important direction for the Iranians.

However, the Islamic Republic decided not to stop at the achieved results, expanding the composition and capabilities of the naval component of the Islamic Revolutionary Guard Corps.

It is worth noting separately that it is the Revolutionary Guard that is engaged in any operations outside the state border of Iran, including carrying out tasks related to the aggressive demonstration of the country's military power. It is for this reason that the IRGC has its own Air Force and Navy units, thus providing all the needs of Tehran's elite troops.

The naval forces of the Iranian Islamic Revolutionary Guard Corps (IRGC-N) will be replenished with a new class of warships - attack corvettes of the Shahid Suleimani type (named after General Qasem Suleimani, head of the IRGC's foreign intelligence units, liquidated during a special operation, conducted by the United States on January 3, 2020).

The design of these ships looks very original - they are a large high-speed catamaran. This, however, is not the first vessel of this type, which is at the disposal of the Iranian Armed Forces - the Shahid Naseri was previously built and put into operation, which, obviously, served as the basis for the new project.

The Chinese and Taiwanese small missile ships - the Type-022 RCA or the Tuo Chiang corvettes - probably served as models for the Iranian shipbuilders.

The exact composition of the nomenclature of weapons is unknown: it will definitely include anti-ship missiles, DShK machine guns, a light deck helicopter and an unnamed shipborne air defense system.

At the moment, the simultaneous construction of three such ships is underway at the shipyards in Bushehr, Bander Abbas and on the island of Qeshm.

The shipyard "Shahid Mahalas" (Bushehr) already had experience working on a combat catamaran - it was previously named in the article "Shahid Naseri". The design of the projects has a direct similarity, but the new corvettes are larger, and, judging by the available satellite images, their hulls are made according to technologydesigned to reduce the vessel's visibility by means of radar detection.

Despite the fact that Tehran has ceased to hide the fact of building ships, it is unclear how exactly the new combat units will affect the doctrine of naval war adopted by the Revolutionary Guard - it is obvious that ships of such a design were developed in accordance with new tactics that are still unknown to us. Until now, the IRGC relied on low-tech means of combat and, accordingly, worked according to the concept of an asymmetric response to more powerful enemy fleets - the tactics of "swarms" consisting of flotillas of small attack boats have been used for decades.

Analysts, however, are inclined to suggest that corvettes of the Shahid Suleimani type are being built precisely as command ships for the above-mentioned forces of the “mosquito” fleet. Not all experts agree with this statement - there are opinions that the Iranian strategy of using unconventional means of naval warfare has failed, especially in light of the low effectiveness of the use of weapons that Tehran supplied to support the Houthis. Unmanned boats with explosives, sea mines and light anti-ship missiles had absolutely no effect on the course of the military conflict in Yemen; the results of the analysis of the hostilities of the allied forces may have prompted the leadership of the IRGC to expand their capabilities by building larger warships.

According to the available data, one can make an unambiguous conclusion that the corvettes of the "Shahid Soleimani" type will be sharpened for the use of the latest Iranian anti-ship missiles; Considering the size of the ships of this project, they are hardly suitable as "floating headquarters", but they look much better in the role of strike ships, sharpened for the tactics of rapid attacks and subsequent retreats.

The relatively large size of the corvettes will make it possible to place radar equipment for self-detection of targets, as well as to increase the number of communications equipment for issuing target designation from coastal radar stations and radio-technical reconnaissance - these options are not available on the current IRGC strike boats, which have an extremely modest displacement and often "civilian" origin - and, as a result, very limited possibilities of engaging enemy ships (with the exception of those that are at a line-of-sight distance).

The use of light helicopters on such small warships looks very curious: unfortunately, their exact functionality is unknown, but we can assume that the tasks of deck vehicles based on corvettes of this type will include search and rescue operations, patrolling, delivery of groups of special appointment and evacuation of the wounded. Given the size of the aircraft, they are unlikely to be used to issue target designation, fire support, carry anti-ship missiles or anti-aircraft missile missions.

In any case, the rearmament of the Islamic Revolutionary Guards Corps means significant changes in the current balance of power: Iran is unlikely to stop building only three corvettes, and the limitedly combat-ready fleets of speedboats are likely to be replaced by larger and more functional strike ships. This means that the Revolutionary Guard fleet will be able to carry out combat missions at a considerable distance from the coastline, affecting its potential rivals in a more effective way: such a transformation of the IRGC's naval staff brings its combat capabilities closer to the capabilities of the Iranian Navy, thereby strengthening Tehran's presence in the Persian Gulf. ...
Reporterin Yandex News
Reporterin Yandex Zen
9 comments
Information
Dear reader, to leave comments on the publication, you must sign in.