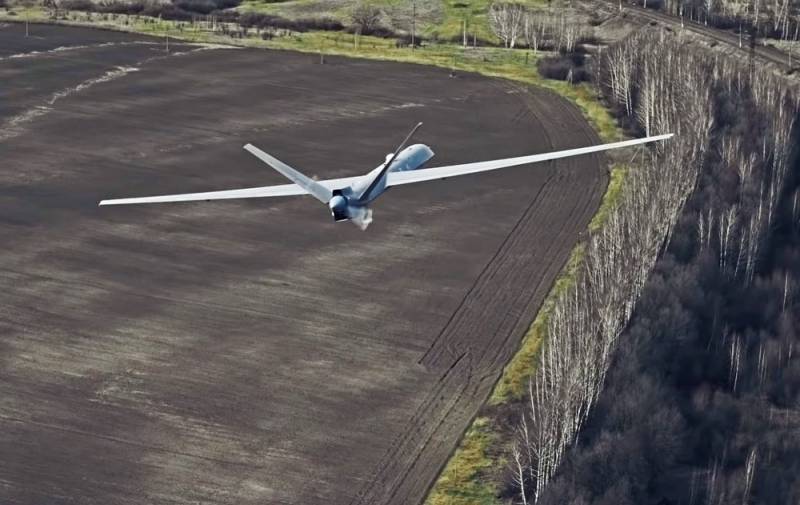 The successes of the Russian military-industrial complex in the development of shock UAVs haunt Turkey. News a publication from that country, called Haber7, told its readers how the Orion medium drone destroyed the Czechoslovak Aero L-39 Albatros combat trainer during an exercise in Crimea as a ground target. At the same time, the Turks noticed with obvious jealousy that the Russians were using a copy of their MAM-L gliding bomb, developed by the ROKETSAN company. How should you treat such information?


On the one hand, the Turks can be understood. Orion and their Bayraktar belong to the same class of attack UAVs. Only the latter has already received the baptism of fire in the Syrian, Libyan and Karabakh campaigns, and the Russian drone is still being tested in action. But the trend cannot but worry Ankara: our country is actively catching up with its potential opponents, developing UAVs of all classes, from light to super heavy. Literally 3-5 years will pass, and the RF Ministry of Defense will have a full-fledged unmanned aircraft, completely produced at its own facilities, which cannot yet be said, by the way, about Turkey itself.

On the other hand, somewhat touched by the complaints of the Turks regarding the "copying" of their weapons by the Russians. First, the Aero L-39 Albatros combat aircraft was actually blown apart by the Russian KAB-20 guided aerial bomb developed by the Tactical Missile Armament Concern (KTRV). And secondly, both Turkey and Russia, when creating a domestic line of reconnaissance and strike UAVs, were clearly inspired by American and Israeli technology... And there is nothing reprehensible in this, on the contrary: both the Turks and the Russians drew the right conclusions from other people's experience and tried to develop weapons that are no less effective, but more budgetary. And they achieved some success in this.


It is no secret that the USA are the pioneers in the field of unmanned aircraft, but they are not engaged in the wide export of their products. Therefore, in the UAV market, the leading players are Israel, China and Turkey, which are trying to draw attention to them in any way. The main problem of drones is the rather high cost of themselves, as well as the weapons attached to them. For example, the Israeli first-generation kamikaze drone Harop cost the buyer $ 100 to $ 800 apiece. The American attack UAV of the first generation MQ-1 Predator was used as a carrier of laser-guided missiles AGM-114 Hellfire, the cost of each of which ranged from 65 to 98 thousand dollars. An expensive pleasure.

What did the Turks do? They did not limit themselves to simply borrowing Israeli technology when developing their strike UAV. In addition, they created two budget corrected gliding ammunition with a laser guidance system MAM-L and MAM-C based on long-range anti-tank missiles L-UMTAS, removing expensive engines from them and increasing the tail area. Their planning range is now 8 kilometers, and the defeat accuracy is 1 meter. Thanks to this, with relatively modest tactical and technical characteristics of the Bayraktar, Ankara received a very effective high-precision weapon and at the same time for adequate money. However, the big problem with this UAV was that up to 80% of its components are of foreign origin.

The creators of the Russian Orion were also clearly inspired by the American MQ-1 Predator. There is a similarity in the airframe design, and the first models were equipped with Rotax 914 piston engines with 115 hp. made in the USA. By the way, the same ones were installed at Bayraktars, and now both Russia and Turkey are forced to make import substitution. The Orion is now equipped with a domestic power plant APD-110/120 with a capacity of 120 hp. The Russian drone surpasses the Turkish counterpart in some of its characteristics: the wingspan is wider and the dumped load is 50 kilograms more. Another competitive advantage over Bayraktar is that it will be completely localized in terms of production.

But the most important thing is not even the performance characteristics, but the Orion's armament. Our defense engineers have relied on relatively budgetary ammunition. Instead of “refining” the anti-tank missiles, they created the KAB-50 corrected aerial bomb, the UPAB-50 guided planning aerial bomb, and the FAB-50 unguided aerial bomb under the UAV. A 50-kilogram bomb is capable of destroying any armored vehicle, even a tank. In addition, we have our own analogue of the American AGM-114 Hellfire - the X-50 guided missile with a high-explosive fragmentation warhead weighing from 10 to 20 kg, as well as an analogue of the Turkish MAM-C - the adjustable small-sized aerial bomb KAB-20.

It is interesting that the publication The Drive from the USA "praised" our "Orion" and "Bayraktar" in the key that they have no competitors in this market niche. At the same time, the Americans pointed out that these drones are derived from their MQ-1 Predator, developed in the last century, and the United States now has a much heavier and more expensive UAV, the MQ-9 Reaper. For my part, I would like to note that the S-70 Okhotnik has already been created in Russia against the "Reaper", which is very promising. Regarding the sneering allusions to our supposedly "technological backwardness", it is worth recalling that the "weapon of victory" does not have to be the most advanced. It requires simplicity and reliability, as well as the best price / quality ratio. For example: many wonderful machines have been created, but half of the world is still running around with our Kalashnikov and its derivatives. Domestic UAVs should occupy this particular niche.
Reporterin Yandex News
Reporterin Yandex Zen
12 comments
Information
Dear reader, to leave comments on the publication, you must sign in.