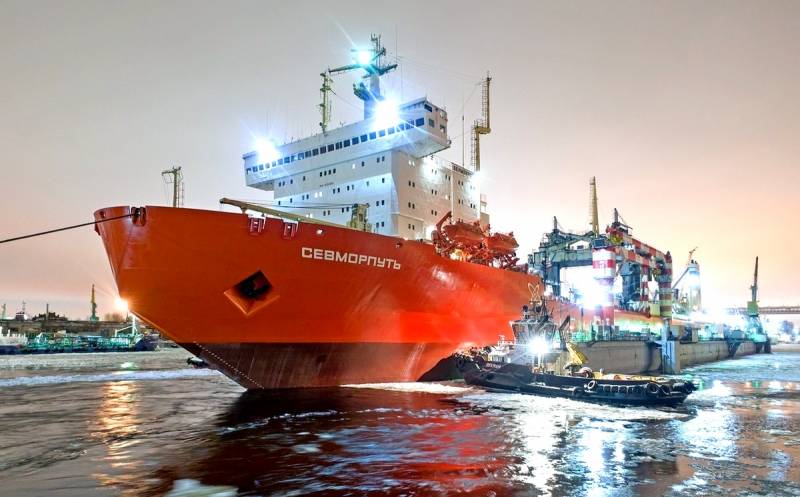 A week-long downtime on the Suez Canal has drawn increased attention to the Northern Sea Route as a possible alternative to the traditional southern transport corridor. As a competitive advantage of the NSR, it is quite rightly called its shorter length on the way from Asia to Europe. However, there is also a well-founded criticism of him for the complexity of navigation among the polar ice and higher transport costs. A certain average estimate sounds like this: The Northern Sea Route has great potential, but it will take more than a dozen years to reveal its potential and it will be very expensive. The key question is: should Russia do this on its own, or would it be more expedient to create some kind of international consortium? Let's try to figure it out.


First, about the pleasant. The Northern Sea Route has received new life today. The first cargo transportation along it went back in the 30s of the last century. At the end of the Soviet era, their peak reached a volume of 6,6 million tons per year, and after the collapse of the USSR, they fell to a level of 1,5 million tons. About 10 years ago, active recovery began due to the implementation of Russian oil and gas projects in the Arctic. From 4 million tons in 2014, cargo traffic increased to 20 million in 2018 and 31,5 million tons in 2020. By 2024, President Vladimir Putin set a goal to bring this figure to 80 million tons, but during the coronavirus pandemic and the decline in oil production and consumption, these plans were forced to be adjusted downward. Despite this, the pace of development of the Northern Sea Route is recognized as "astronomical". The Zvezda superyard has been created in Primorye, where ice-class vessels are being actively built and giant Leader-class icebreakers are laid down.

Everything seems to be fine, and we can cope with everything ourselves. However, there are important nuances. The bulk of this disruptive growth in freight traffic comes from the transportation of Russian oil and LNG. But when they talk about the Northern Sea Route as an alternative to the Suez Canal, it is understood that not only tankers with hydrocarbons should go along it, but also ordinary bulk carriers transporting containers from Asia to Europe. For more information on why it is impossible to simultaneously transfer these commodity flows from the southern route to the northern route, we told earlier. Let us list in a nutshell the main problems facing carriers: difficult navigation among ice, the need to use ships of a special ice class, and also to accompany them with icebreakers. In addition, along the coastline of the Arctic Ocean, there should be a developed port infrastructure, where tankers and bulk carriers could dock, replenish fuel and food supplies, receive repairs, and their crews could rest. Apart from Murmansk, Russia has no other deep-water ice-free ports there. The construction of the appropriate infrastructure in the harsh Arctic conditions requires huge investments, with which we are under pressure today.

Objectively, the problem of choice arises: to continue to do everything on our own "quietly" or to attract foreign partners and develop the Northern Sea Route together with them within the framework of international cooperation. Despite its apparent simplicity, this choice is far from obvious. The key issue is the legal status of the NSR, which all interested parties interpret in different ways. The Russian position is based on Soviet legal doctrine, and Moscow regards the Northern Sea Route as “a historically established national transport communication”. In accordance with this, the following is stated in the Navigation Rules for this area:

The organization of navigation of ships in the water area of ​​the Northern Sea Route is carried out by the Administration of the Northern Sea Route, created in the form of a federal government institution. In the water area of ​​the Northern Sea Route, there is a permitting procedure for navigation of ships.
The Russian Federation charges foreign vessels for pilotage and icebreaking services, justifying this by the need to maintain the infrastructure of the NSR, to protect the marine environment and its biodiversity. Moscow strongly opposes the use of icebreakers belonging to other states. Despite this, the United States and China are currently actively building their own icebreaker fleet. Why does Beijing need its Snow Dragon 2? But guess three times.

It is clear that China is interested in the Arctic region, in its natural resources and opportunities provided by the NSR. However, in our country there are many opponents of attracting Beijing to the Russian part of the Arctic, arguing that “the Chinese will come, take everything away and dirtiest it”. Indeed, if you give them freedom, many entrepreneurs from the PRC can behave in a similar way. The question is different. China and the United States both have clear Arctic ambitions, financial resources, and a strong production base. They will come to the Northern Sea Route anyway, it's only a matter of time, and here's why.

Let's turn to the text of the 1982 Convention on the Law of the Sea, which underlies the Russian position on the NSR, and in accordance with which Moscow writes the rules for the use of its water area. Article 234 of this international agreement states the following:

Coastal states have the right to enact and enforce non-discriminatory laws and regulations to prevent, reduce and control marine pollution from ships in ice-covered areas within the exclusive economic zones where especially severe climatic conditions and the presence of ice covering such areas for most of the year create obstacles or increased danger to navigation, and pollution of the marine environment could seriously harm the ecological balance or irreversibly disrupt it.
In "ice-covered areas"? “The presence of ice that impedes navigation”? When this text was written, it was not taken into account that the polar ice will melt at such a rate. This natural process can play a cruel joke with our country. On the one hand, the natural clearing of the Northern Sea Route benefits us. On the other hand, the liberation of the water area from permanent ice cover calls into question the exclusivity of Russia's role in control over it. Therefore, in the end, other players will come to the Arctic, who will jointly seek to change the special status of the Northern Sea Route to the international one. It's just a matter of time.

What should we do? You can pretend that everything is in order, or you can work proactively. Russia has the longest coastline and the largest icebreaker fleet in the world in the Arctic Ocean. These are two of our inherent advantages that can be used even if other people's icebreakers start walking along the NSR. It is already possible to create an international consortium to invite China and other interested countries, which will be ready to invest in the construction of coastal port infrastructure on our territory, as well as create a merchant fleet of ice-class ships. By launching Leader-class super icebreakers, Russia will be able to provide caravan escorting services at any time of the year, earning money on transit through SPM and servicing other people's ships.
Ctrl Enter
Noticed oshЫbku Highlight text and press. Ctrl + Enter
We are
Why the Northern Sea Route can never replace the Suez Canal
The Northern Sea Route may become not only Russian
Reporterin Yandex News
Read Reporterin Google News
6 comments
Information
Dear reader, to leave comments on the publication, you must sign in.