There will be no offensive of the Ukrainian Armed Forces in Donbass: specific signs and reasons 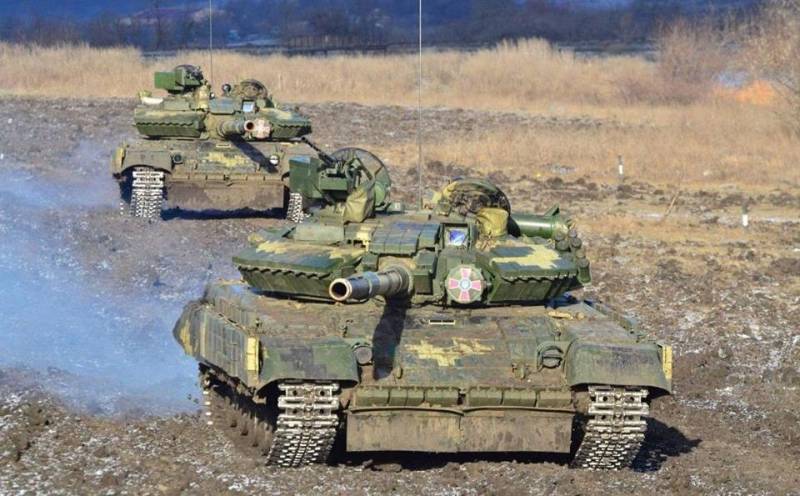 The situation around the possible resumption of hostilities in the East of Ukraine in recent days has worsened literally to the limit. It got to the point that open steps aimed at demonstrating readiness to use force began to be made on both sides of the Ukrainian-Russian border. Threats and "warnings" against Moscow are no longer only heard from Kiev, but also from Washington and Brussels. Officials from the State Department, as well as generals from the Pentagon and NATO, promptly got involved in the case. Is the world hanging by a thread? Half a step left before the war?


Nothing like this. What is happening now is nothing more than another information and propaganda campaign of the "nezalezhnoy", pursuing goals that have nothing in common with the outbreak of a full-scale war. Why is that? Let's figure it out.

Signing and putting into effect defense doctrines and broadcasting from TV screens about "readiness to attack in Donbass" is political and the military leadership of Ukraine can do as much as they want. You know, the paper will endure everything, but the TV viewers there over the past seven years have become accustomed to not such "sensations". In reality, for all their unprofessionalism and narrow-mindedness, these figures are well aware that neither the army nor the country as a whole is ready for war. All the previously planned "modernization" and "rearmament" of the Armed Forces of Ukraine ended in absolutely nothing - new equipment and there were no weapons, and no. Maximum - Soviet samples, somehow patched up during a lull that stretched for several years. This - as for, say, artillery or armored vehicles. The situation with aviation and missiles is much worse. Moreover, it is, of course, possible to transfer the same tanks or MLRS to the line of contact. But what do you want to fill them with? Today Ukraine is on the verge of the most severe fuel crisis, created by it "with its own hands."

There is reason to believe that it will not be possible to collect enough diesel fuel even for the sowing campaign, what kind of military action is there - with empty tanks? Again, it is unlikely that Kiev would have taken actions that eventually "cut off" it from at least 20% of diesel fuel supplies in anticipation of a major offensive. In addition, one should not forget that war is a costly business, and the treasury of the "non-profit" is empty. The budget is bursting at all the seams and it is absolutely unknown how to fill it. Attempts to take Kiev anywhere, at any interest and under any conditions, have not been crowned with success and are unlikely to be crowned. Moreover, the country has a terrible epidemiological situation. The situation with the incidence of coronavirus in the population is so difficult that the government is talking with might and main about the introduction of not only a strict quarantine, but also a curfew. In such conditions, wars do not start.

The times of the noble Kiev princes, who began their campaigns with the history “I'm Coming to You,” are long gone. Modern armed conflicts, as a rule, are unleashed with a lightning strike, completely unexpected. In any case, for the defending side, which in our case is played by the Republic of Donbass. At least some chances to advance through their territory without facing the most crushing rebuff, the Armed Forces of Ukraine would have only if they made a surprise attack. What do we really see? Kiev "trumpets" the whole world about its own readiness to fight, naturally in the usual manner, trying to blame everything on the "provocation of the Russian aggressors." At the same time, for example, such a serious (at least in name) "office" as the Main Intelligence Directorate of the local General Staff does not even try to give its own information "stuffing" at least a kind of credibility.

As "documentary evidence" of insinuations that "Russia is preparing to induce Ukraine to a military response to its provocations in order to seize the territory of all Donetsk and Luhansk regions", the department publishes on its own official website ... parade in Minsk in 2019, shamelessly "ripped off" from the resource of the Ministry of Defense of Belarus! Everything that is happening now is the usual "military" hysteria of Kiev, perhaps raised to the nth degree. Telephone conversations of the Ukrainian Chief of General Staff with his American counterpart, as well as the head of the Pentagon with the Minister of Defense of the "non-railway", a widely publicized meeting of high-ranking officials of the Armed Forces of Ukraine with the military attachés of the United States, Canada and Great Britain - all this is the same propaganda hype from the series "Abroad will help us! " It has absolutely nothing to do with preparations for a real war. So what is going on?

The reasons for Kiev's current attempts to inflate tensions to the maximum, which it is carrying out, indeed balancing on a very dangerous brink, lie in a number of points, which I will try to briefly list. The authorities of the "nezalezhnoy" are extremely irritated by two very distinct trends that have emerged recently. Firstly, their European "partners" have rather harshly demonstrated their tiredness from Kiev's stubborn reluctance to take any real steps towards de-escalation and peaceful settlement of the conflict, following the "Minsk Agreements". The recent communication in the format of the Normandy Troika is the best proof of this. Ukraine is shown that its fate can be decided without itself, but with the participation of Russia. Secondly, it is not a secret for anyone that the rapprochement between Donbass and our country has sharply and several times increased. And this is not about political declarations, but about very specific steps.

Such, for example, as accelerating the acquisition of citizenship of our country by the residents of the Republics. In the DPR alone, according to its leader Denis Pushilin, more than half a million people should receive a Russian passport by the end of the summer. And this makes the "Abkhaz scenario" more than probable, which is so feared in Ukraine in the event of any of its attempts to "de-occupy" the region by force. Donbass in front of Kiev's eyes "floats" to the East and this process is accelerating more and more. However, all these factors are deeply secondary for the puppet administration that is now running the "nezalezhnoy" administration. Much more important for its representatives is something else - relations with the West, and, first of all, with its main masters, the United States. And here everything is completely nasty.

Not a single government, not a single president in "post-Maidan" Ukraine can consider themselves legitimate and calmly engage in plundering the remnants of the country until they receive a "reign label" from Washington. In the case of Zelensky, this has not happened yet. Moreover, there are extremely alarming symptoms - for example, in the State Department's report on human rights, a lot of hard-hitting lines are devoted to Ukraine. And yet, and this looks much more threatening for Kiev, the Americans not only hinted transparently, but made it clear in a completely open text: there will be no money! Counselor at the U.S. Embassy in Ukraine for economics Megan Baldwin made it very clear that the administration of the current president "sees no way to provide Ukraine with guarantees for a new loan." Moreover, she added to this that “non-leveraged” and so “has sufficient access to considerable volumes of inexpensive lending”, and in order to qualify for something more, it is necessary “to meet certain conditions”.

Obviously, in the eyes of the White House, Ukraine does not respond to that. All this taken together looks more than menacing for Zelensky and his "team". It is not long here and before a very sad ending. Most likely, it was precisely because of all of the above that Kiev decided to take the most extreme measures from the series "Help, they are beating ours!" So far, I must say, it is getting pretty good - Washington "stirred up" at least at the level of the State Department and the Pentagon. And there, you see, Joe Biden himself will condescend at least to a telephone call, the very fact of which can be presented to the "city and the world" as a confession. This is the true goal of the current mess, and not an attack on the position of the Republicans.

It is clear that if a command comes from the United States to start such a thing, the case will not be followed. However, in my opinion, those who see such a background in current events, forgive me, put the cart in front of the horse. If the confrontation with Ukraine's entry into full-scale hostilities against Donbass, and, as a result, our country, had been started by the Americans, everything would certainly have happened in a completely different way. In the current situation, Kiev will go in its provocations and insinuations just enough to finally be seriously paid attention to. Yes, if for this it is necessary to arrange bloodshed, they will arrange it without hesitation or hesitation for a second. However, even in this case, the Ukrainian side will most likely try to adhere to some framework, going beyond which is fraught with a big war.

In order to understand this, you need to know the real situation in Ukraine. Its population is now on the verge of an explosion, the cause of which for the first time in many years may well be not political, but more than real social problems. Vaccination in the country has been disrupted, the coronavirus is spreading at a catastrophic pace, the medical system is on the verge of collapse. The government is responding to this in the only available way - increasingly stringent quarantine restrictions, leaving a lot of people without any means of subsistence at all. This is happening against the backdrop of a completely catastrophic rise in prices for absolutely everything - from food and fuel to utilities.

How long the long-suffering of Ukrainians will last, many of whom today cannot even resort to the usual way of solving such problems, "dumping" them out of the country for work, is unknown. At the same time, the "nezalezhnoy" clearly understands (including thanks to the tough position of Russia) that there will be no small or victorious war in the Donbass. An inevitable stream of killed and wounded, a new conscription into the army, which will have to be carried out forcibly, and all the other "delights" of military life - all this can cost Zelensky and the company not only the authorities, but their heads. Proceeding from this, it is possible to assert with the highest degree of confidence that the Ukrainian "commander-in-chief" will not give the command to attack in the near future.
Reporterin Yandex News
Reporterin Yandex Zen
32 comments
Information
Dear reader, to leave comments on the publication, you must sign in.