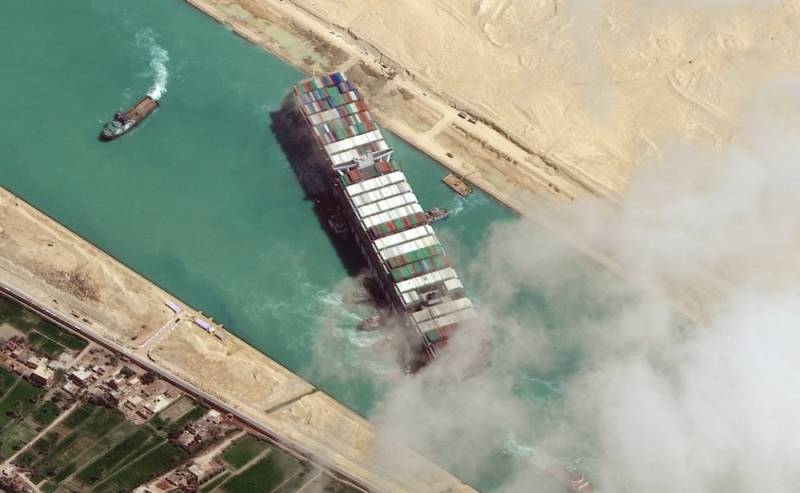 So, the "Suez incident" is practically over. It took Egypt almost a week to uncork the most important transport waterway, through which 13% of world trade passes. According to the calculations of one well-known insurance company, the world the economy in those few days, damage in the amount of $ 6 to 10 billion could be caused. What conclusions will be drawn from this emergency?


The first thing I would like to talk about is how the operating mode of the Suez Canal will change in the future. It is quite obvious that more giants like the Ever Given container ship will no longer be allowed into it. The carriers have no complaints about the channel itself. The huge dimensions of the vessel, multiplied by the human factor, have become a problem. The result of the captain's mistake was the blocking of an important trade route and a whole line of other container ships and tankers. The exceptional size of the ship also prevented it from being promptly dragged from the shallows and unblocking the waterway. By the way, Egypt intends to recover the damage caused from the company that owns the container ship.

A direct consequence of this situation will be a steady increase in the cost of shipping. This market is divided between 5-6 powerful transport companies, in whose interests it was to rivet such giants capable of transporting up to 20 thousand containers at a time. During the blockade, carriers simultaneously raised the prices for their services almost fourfold! The cost of shipping one 12-meter container from Asia to Europe rose to $ 8. It is noteworthy that this affected all directions, even those that were not connected with transit through the Suez Canal. The cost of chartering a Suezmax class tanker to transport 1 million tons of oil now costs $ 17 per day. And this is along the water route from the Middle East to Asia. If giant container ships of the same class as Ever Given will no longer go through the Suez Canal, but bypass the African continent, then one can imagine how much the overhead costs of customers will increase, and with them the cost of goods transported to consumers. These are the circles on the water already launched by the "Suez incident".

The third issue that I would like to touch upon within the framework of this review is the prospects of our Northern Sea Route as an alternative to the Suez Canal. “On paper” it looks more preferable because of the shorter distance between Europe and Asia, the polar ice is melting, and we are pleased that most of the coastline of the Arctic Ocean falls on the share of Russia. However, there are a number of bottlenecks that are not easy to solve overnight.

At firstUnlike the habitable Suez Canal, there is no developed infrastructure on the Northern Sea Route, except for one deep-water ice-free port of Murmansk. Merchant ships should be able to moor somewhere, refuel, replenish fuel supplies, get repairs if necessary, etc.

Secondly, not every ship will pass along the Northern Sea Route. To begin with, it must be of ice class, but these are far from all the requirements for it. Substantial restrictions on the dimensions and displacement of vessels give rise to relatively shallow depths of the straits. It is necessary either to deepen the seabed in "narrow places", or to start massively building ships that meet the realities of the Northern Sea Route.

ThirdlyDespite the melting of polar ice, the ice situation on this waterway is very difficult, and therefore one cannot do without the accompaniment of a nuclear-powered icebreaker. This is especially critical in winter. Therefore, the customer will need to add the services of a pilot and an icebreaker to the cost of transportation.

What conclusions can be drawn from these calculations? Today our Northern Sea Route cannot be a real competitor to the Suez Canal. However, this does not mean that it will always be so. The process of clearing polar ice continues in a natural way. In terms of the number of icebreakers, Russia has no equal in the whole world. After the commissioning of super icebreakers of the "Leader" class, they will be able to navigate even in winter, that is, the Northern Sea Route will not function seasonally, but all year round. And this is his big plus. As for the coastal infrastructure and specialized ice-class vessels, everything is somewhat more complicated. All this costs a lot of money and is quite expensive to build. The figures are up to $ 100 billion. Today, Russia simply cannot afford such investments on its own, therefore we have two options: either to postpone this matter until better times, or to start doing it now, but in partnership with other countries.

With whom? It is clear that with China, from where giant container ships go through the Suez Canal. Beijing has both free funds to invest in coastal infrastructure and deepening of sea straits, if necessary, and production facilities where it is possible to quickly rivet the required number of ice-class vessels. He will also be the main customer of container transportation. Why would he invest in this infrastructure project? Then, between China and the United States begins its own "Cold War", and the PRC needs alternative routes for the delivery of its goods to the European market. This is a fundamental issue of risk diversification. Who knows what will happen in the Suez Canal next time? Some terrorists will detonate a bomb on board the next container ship, and he will lie on the bottom, permanently blocking the waterway for a long time. You can't get off with a few tugboats here.
Reporterin Yandex News
Reporterin Yandex Zen
16 comments
Information
Dear reader, to leave comments on the publication, you must sign in.