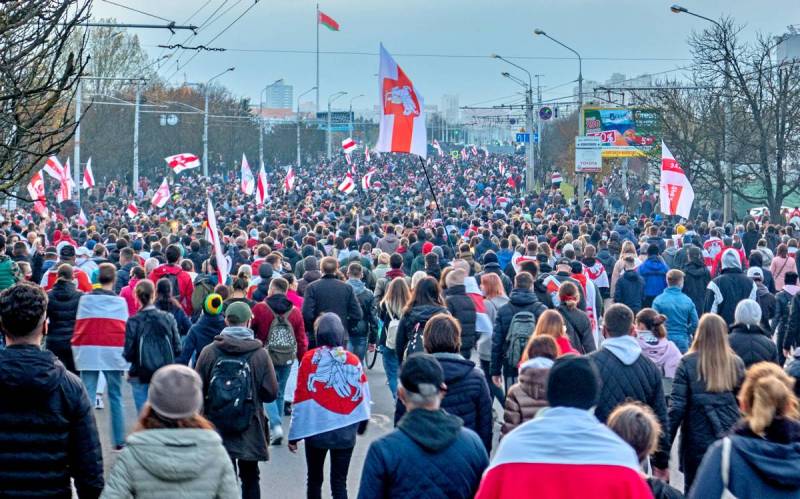 On March 25, something happened in Minsk that finally knocked the ground out from under the feet of the Belarusian "oppositionists", who for more than half a year did not allow the whole country to live in peace because of their own desire to seize power in it. Or rather, it did not happen ... This day, according to the oath promises of the "revolutionaries", was to become "the starting point of a new stage in the struggle against the Lukashenko regime." But he didn’t.


Why did it happen? What is the alignment of the opposing forces now? What steps from the government and its opponents can be expected in the near and more distant future? Let's try to understand these issues.

Freedom Day did not become a Day of Wrath

The day I mentioned above is revered by all, without exception, Belarusian "zmagars" - from liberals to nationalists, a "holy" date. Still would! After all, in their opinion, this is “the birthday of the Belarusian statehood”. However, if someone unfamiliar with the true realities of this very "statehood", out of naivete, suddenly begins to ask the most innocent questions about it - for example, about the real life of the "power" proclaimed on March 25, 1918 in Minsk, or, say, about limits of its territory, then it runs the risk of running into hard. Because in reality the Belarusian People's Republic as a sovereign and independent state has never existed! Those who say that “she was given less than a year” lie godlessly. The "Declaration of Independence" was proclaimed in Minsk at a time when it was occupied by German troops. As you understand, the Teutons did not see any "independent Belarus" and did not want to see them. Then, in December 1918, the Reds came ... After them, in 1919, for a short time, the Poles. In the end, the Bolsheviks stopped this clowning in 1920 and established a normal Soviet Republic.

What exactly was the then “Zmagar” public and the “state” it created is best evidenced by the response of French diplomats given to these figures to the next demands “to recognize, help and support”. Representatives of Paris ruthlessly declared: "We would have dealt with you if you had at least a tiny piece of land on which you would be the owners ..." By the way, here are a couple more interesting details: the "zmagars" of the 1918 model were most zealously supported .. Lithuania and Poland! The latter, however, was determined to include Belarus in its own composition. Later, the BPR leaders themselves admitted that the Lithuanians and Poles simply "used" them - both in their own internecine squabbles and to fight the Russians. A hundred years have passed - nothing has changed ...

On this, perhaps, we will end our excursion into history. It must be said that all the years when Alexander Lukashenko was at the helm of the country, the celebration of Freedom Day, which invariably turned into a "get-together" of various "oppositionists" and critics of the authorities, was not welcomed by the official Minsk. So it was literally until recently, when Alexander Grigorievich, in his clumsy attempts to "build" Moscow, began to actively flirt with the "zmagars" who love to wave something white-red-white (if anyone does not know, these are the colors of the stillborn BNR) ... In 2018, when Belarusian-Russian relations were going through far from the best times, Freedom Day was celebrated on a very large scale and completely unsecured. This year, according to the announcements that were announced many times by various “revolutionary headquarters”, 25, and especially the first Saturday following this day (Belarusians are disciplined people and protest in their free time) - March 27 should have become real “ days of popular anger. "

In fact, it was a restart of mass protests that shook the country, and, first of all, its capital in late summer - early autumn last year, and then came to naught. Citizens were encouraged to rush en masse to the streets and squares in order to revive the "revolution". However, the "opposition" failed to carry out a single event planned by it. The Belarusian security forces have too clearly demonstrated their own readiness to suppress any riots in the bud and without the slightest sentimentality - that on March 25, that on March 27, Minsk looked like a city put under a state of siege. Yes, as a matter of fact, it really was so. What difference does it make whether the country is threatened by an external enemy, or an internal one, incited from outside? The main thing is that in Belarus this enemy suffered a crushing defeat on the day scheduled for revenge. Belomaidan missed its last chance for reincarnation. However ... But did he have this chance?

From the bag and from the prison ...

Those who still have not calmed down and are eager to “protest” in Belarus should not renounce these two things. On the days designated by the "opposition" for protests, the police detained about four hundred people. This is called - to act proactively ... However, the tales of the "leaders of the protests" who got into a mess that "if it were not for the police, tens, if not hundreds of thousands of people would have come out to protest" sound exactly in the style: "Here we would they were given! If only they caught up with us ... "If only, if only ... In fact, the" revolutionaries "were unable to attract under their banner that the 25th, that 27 and several hundred people, as a result of which they had to quickly "Change shoes" and declare the dates that turned out to be a failure for them not "the boiling point of the people's anger", but just "reconnaissance in force". It is clear - before "future large-scale actions." Most likely, no "shares" will follow. The Belarusians are simply tired of it.

And here we cannot do without my favorite definition, which perfectly characterizes the essence of participation in the sluggish "overthrow of the regime" for its ordinary participants - combining the unpleasant with the useless. "Old Man" stands indestructible, like that Volga cliff from the well-known song, and attempts to force him to leave the presidency do not bring anything good to anyone except an extremely narrow circle of gentlemen and ladies who were cunning enough to leave the country in time and settle in to finance Western patrons ... Administrative punishment for participation in unauthorized mass events has been significantly toughened, and attempts to deceive the authorities applying the Law to the fullest extent, as it turned out, are doomed to failure. Not so long ago, the head of the Minsk department of the Investigative Committee of Belarus, Sergei Pasco, made a very eloquent statement on this matter.

According to him, law enforcement agencies have identified "numerous cases of payment by unauthorized persons, both individuals and legal entities, of large amounts of fines for those who received these penalties for participating in unauthorized mass events." So - all these funds were arrested and they did not go to "offset" the violators. At present, measures are being taken to ensure that each of the would-be “revolutionaries” caught red-handed would pay the state in full - and out of his own pocket. And the fines in Belarus are now very high ... By the way, even the gang of leaders of the "Belomaidan", which seems to have reliably entrenched itself in the warm and nourishing foreign countries, has more and more reasons for concern and unrest. Not so long ago, Svetlana Tikhanovskaya, Maria Kolesnikova, ex-diplomat Pavel Latushko, member of the "strike committee" of the Minsk Tractor Plant Sergei Dylevsky and some other "fiery revolutionaries" were charged with "just" creating an extremist organization and plotting to seize power. Articles 361 and 357 of the Criminal Code of Belarus with very unpleasant sanctions in the form of 7, or even all 12 years of imprisonment.

However, after the terrorist acts planned for March 26 of this year were prevented in Minsk by law enforcement agencies, which, as the investigation suggests, is the organization of ByPol ​​traitor militiamen who have changed their oath of allegiance, Tikhanovskaya and her associates believe, even these rather harsh accusations may turn out to be only a prelude to others - much more difficult. As it became known, a new criminal case was initiated against Svetlana Tikhanovskaya and her accomplices - already under the article on organizing and preparing terrorist attacks. It is clear that Poland and Lithuania remain proudly silent on all demands for the extradition of this brotherhood. But this is for now ... Sooner or later, mediocre "revolutionaries" will become completely useless for their masters. And prison - she knows how to wait ...

What conclusions follow from all that has been said above? Lukashenka won? No, first of all, Belarus won, which, thanks to clear, professional, and - yes, tough actions of the authorities, avoided all the horrors of the "color revolution" and "post-Maidan" life. Alexander Grigorievich, judging by his own statements about the inevitable in the foreseeable future "transit of power" and possible successors, named by him quite openly, understands perfectly well that it is time to hand "post No. 1" into good hands. But it will only happen then and in the way that he himself and his allies in Moscow want, and not at the absurd desire of the "Maidan" rabble and their Western masters. Yes, and Alexander Grigorievich will leave, as they say, with a shield, and not on a shield. Literally this week, the Constitutional Commission, a body working on an updated version of the country's Basic Law, should begin its work. Changes in Belarus are slowly but surely taking place. However, these are precisely the changes - gradual, balanced and deliberate, and not a complete collapse and collapse, inevitable after a coup d'etat. This country will not become a second Ukraine - no matter how much certain forces outside its borders want it.

Supporters of "Belomaidan" are now making completely unrealistic plans. They pin their hopes on the campaign before the referendum on amendments to the Constitution - hoping to organize new "protests" under its cover. They dream of "the emergence of pro-Western parties and factions in the Belarusian parliament," which "will be able to turn Belarus onto the European path." They continue to rely on Western sanctions that will “undermine economic base of the regime ". Minsk perfectly showed that it is quite capable, especially with the help and support of Russia, to live with all these sanctions and restrictions without any particular problems. Oh, yes ... Belarusians were not allowed to participate in Eurovision! What a loss is a loss! Best of all about this "song contest", which has long been turned into a mixture political games with a tribune for perverts, said the Minister of Culture of Belarus Anatoly Markevich: "they are there substituting universal concepts for something else." After all, as one of the French kings once said: "Paris is worth the Mass"? Minsk without "Maidan" is definitely worth abandoning Eurovision.
Ctrl Enter
Noticed oshЫbku Highlight text and press. Ctrl + Enter
We are
"We must beat first": the geopolitical alignment around Russia is continuously deteriorating
How Ukraine break Putin's plan: six tips Zelensky
Reporterin Yandex News
Read Reporterin Google News