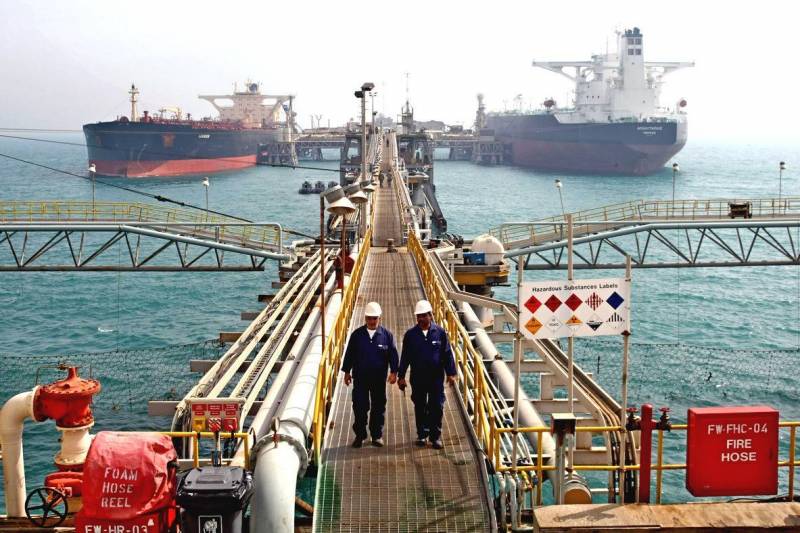 China has taken another step in the global geopolitical confrontation with the United States. A year ago, under the auspices of Beijing in the Asia-Pacific region, the Comprehensive economic partnership (RCEP), which united 14 countries, including even those that were traditionally considered allies of the United States. This was done on the wreckage of the Trans-Pacific Partnership, which was previously promoted by Democrats, and then destroyed by Republican Donald Trump. Now China has demonstratively started to "pick up" the Middle East, squeezing the Americans out of there with the help of its "soft power".


Today, the priority area of ​​Chinese economic expansion is the African continent, but one should not forget about Beijing's interest in the Middle East rich in hydrocarbons. And this interest is mutual. Bahrain, Iran, Iraq, Kuwait, Lebanon, UAE, Saudi Arabia, Oman have already signed an agreement on cooperation within the framework of the One Belt, One Road project. In return, for example, Riyadh, considered one of Washington's loyal pillars in the region, is counting on technological China's assistance in the implementation of the extremely ambitious Vision-2030 project, thanks to which Saudi Arabia will be able to diversify its economy and bring the share of non-primary exports to 50%. The Middle East monarchy is a major market for the sale of Chinese weapons, and Saudi oil is now the number one supply to the PRC. Chinese Foreign Minister Wang Yi said on cooperation with the kingdom:

We strongly support the greater role of Saudi Arabia in regional affairs and are ready to work with the Saudi side to promote peace, stability and development in the Middle East.
Like this. Judging by the tone, one gets the impression that this is Beijing, and not Washington at all, is the "big brother" for Riyadh. But these are far from all the "eggs" in the Chinese basket. The PRC in 2019 set out to invest $ 290 billion in the oil sector of Iran, which is a long-standing adversary of the Saudis. At the same time, China invested $ 2,4 billion in the construction of a logistics center in Dubai to facilitate the export of its goods, as well as another billion in a food project in this emirate.

And at the end of March 2021, the head of Chinese diplomacy went on a big Middle East tour, with the goal of visiting Turkey, Saudi Arabia, Iran, UAE, Oman and Bahrain. At the same time, in addition to money (and the PRC invests about $ 140 billion a year in foreign projects), Beijing also brings a certain amount of money to the Middle East. political a program consisting of five conciliatory points. Thus, China proposes to exclude any external influence on the region; resolve local conflicts (for example, the Palestinian question) from a position of justice and impartiality; reduce the degree of military tension by returning to the "nuclear deal" with Iran; move to an equal direct dialogue between the countries of the Persian Gulf, as well as deepen the economic cooperation of these countries with China itself.

In other words, in fact, in direct text, Beijing says that it is ready to be a new arbiter in Middle East affairs, fair, impartial and generous, at the expense of decreasing influence on the part of Washington. A serious application, especially considering the economic weight and financial capabilities of the PRC. And I must say that at least one country happily seized on this offer.

The New York Times reported that China has pledged to invest a gigantic $ 400 billion in Iran over the next 25 years in exchange for guaranteed oil supplies at a significant discount. These funds will go to the construction of ports, railways, healthcare, banking and telecommunications, information technology. Also, cooperation will relate to the military field: joint development of weapons, exercises, exchange of intelligence. In fact, Beijing almost completely nullifies the effect of US sanctions against Tehran and ties it tightly to itself. Foreign Minister Wang Yi said:

China firmly supports Iran in protecting its national sovereignty and national dignity.
In the context of 2021, this sounds like a direct challenge to hegemony from the United States. Note that the PRC is not going to rely on only one Islamic Republic as opposed to all the others. On the contrary, the Chinese are ready to cooperate with all the Middle East countries and be mediators between them. This is a serious claim to become the new "overseer" in this strategically important region instead of the United States. And countering this "soft power" will be extremely difficult even for the Americans. What will they say: don't take this money, don't sell them your oil, don't buy their technology and weapons, or what? They will take it, they will not go anywhere.
Reporterin Yandex News
Reporterin Yandex Zen
10 comments
Information
Dear reader, to leave comments on the publication, you must sign in.