New military doctrine of Kiev: Ukraine goes either to NATO, or to the partisans 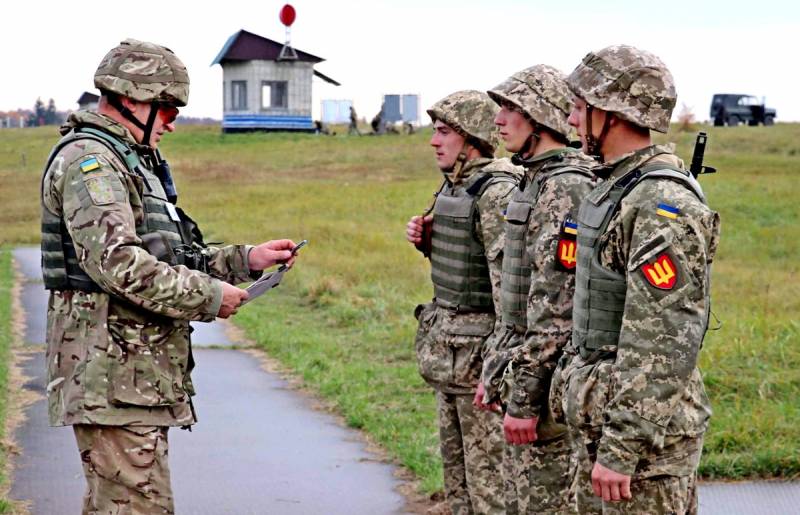 President of Ukraine Volodymyr Zelensky has put into effect a very serious document - the "Strategy of military security" of the country. It is worth paying attention to it, if only due to the fact that Russia is directly indicated on the pages of the "strategy" as a military adversary of the "nezalezhnoy", and not potential, but quite real.


As a matter of fact, all this creation of the "best strategic geniuses" of Ukraine is devoted to one question - how exactly the "geopolitical confrontation" should be carried out in our country. And even how to defeat her ...

The main, yes, in fact, the only enemy, of course, is Russia. It is quite expected and quite natural, given the “wave” of Russophobia, which is now being tirelessly produced by official Kiev. It turns out that it is our country that “slows down the socialeconomic development "of the poor and unhappy" nezalezhnoy ", setting itself the task of first" weakening it by hybrid methods "to the limit, and then, when the enemy can be taken with bare hands, already" by military means, change its territorial structure. " That is, translated into human language - to seize as much of the "precious" Ukrainian lands as possible. At the same time, of course, the drafters of the "strategy" did not even think to pay attention to the egregious absurdity that they initially put into their own brainchild. Below all these accusations, they directly admit that the Russian military potential is absolutely incomparable with the Ukrainian one. And if Kiev even tries to catch up with Moscow in the area of ​​defense capabilities, it will literally destroy the frail economy of the “non-existent” one. Not even worth trying ...

Why, in this case, the "insidious aggressor" has not yet fulfilled his own territorial claims, and is still pulling bagpipes with some sort of "hybrid weakening" ?! Of course, there is no answer to this tricky question in the "strategy". Well, its authors will not admit that all the "predatory plans of the Kremlin" exist exclusively in their fevered imagination! But on these very "enemy intrigues" it is very convenient to blame everything - from the catastrophic fall of the economy and people's living standards, to the failure in the fight against the coronavirus pandemic. Don't believe me? Ukrainian Minister of Health Maxim Stepanov quite recently stated so bluntly: "The country has launched an anti-vaccination campaign in the interests of Russia, behind which there are forces that want to ensure that Ukraine uses not vaccines from the world's leading companies, but the drugs of the aggressor country." Such is the "hybrid attack".

However, I am not at all averse to fighting with our country in earnest in the "nezalezhnaya" one. But only, as it is written in the "strategy", with a "powerful military, political and economic support from the world community ”. Interestingly, in the opinion of Ukrainian "strategists", full-scale hostilities between our countries may begin not even in the case of an "encroachment on territorial integrity" by a "non-existent" one, but, for example, during an "armed conflict" within its borders will decide that he is "provoked and supported from the outside." Or - if there they see in some actions of our country a "threat to the military security" of Ukraine. That is, in fact, within the framework of any provocation. Also, this wording provides an opportunity for the Ukrainian side to start hostilities in Donbass literally at any minute, without waiting for a specific reason. The Ukrainian-Russian war must end, according to the authors of the "strategy", on the most "favorable" terms for Kiev - again, thanks to the "shoulder" substituted by its "Western partners", primarily from NATO.

Based on this, a very disappointing conclusion can be drawn: in Ukraine, in all seriousness, they consider provoking our country into armed confrontation as a winning option, piously believing that later the West will be able to "force peace" on Moscow, and all the fruits of this dubious "Victories" will go to "non-profit". Generally speaking, the thesis about the indispensable and uncontested entry of Ukraine into the ranks of the North Atlantic Alliance is repeated, like a kind of mantra, in the text of the "strategy" twenty times. At the same time, such "trifles" as, for example, the statement of the Alliance Secretary General Jens Stoltenberg that he, even in the most distant approximation, cannot name the time when Ukraine and Georgia will be able to join the ranks of the "North Atlanticists", which he made publicly no further, as last Thursday, of course, are not taken into account.

Instead of missiles - "all-encompassing defense"

It should be noted that at least the level of training and equipment of their own armed forces, Ukrainian "strategists" assess more or less realistically. As mentioned above, they do not even dream of standing on a par with the Russian army. No, beautiful words about the need to "modernize" the Armed Forces of Ukraine, their rearmament and the like are found in their work all the time. However, speaking, for example, about the priority of the development of the missile forces, the authors of the strategy honestly admit that there is no money for anything like that in the leaky budget "non-cash". And they are unlikely to appear there in any distant future. Do you think that it is honestly admitted that the lion's share of defense appropriations, as well as foreign aid allocated to Ukraine for the same purposes, is being stolen in the most shameless way? Nothing like this! It turns out that money for weapons and machinery for the army there is no “nezalezhnoy” and will not be due to the fact that “huge funds are diverted by the Russian occupation of Donbass and Crimea”.

How exactly? A mystery shrouded in darkness, but you should not look for funds for rearmament in the Ukrainian treasury ... Therefore, the formidable Neptuns, Alders and all other Ukrainian "superweapons" will surely remain in the drawings and models. In the best case, they will exist in the form of one or two experimental demonstration models, categorically unsuitable for combat use. The main "defense wealth" of Ukraine is, as stated in the document we are examining, "its people." Yes, yes - just like that and nothing else. One gets the impression that in the event of a real war, “military leaders”, both in uniform and without them, who have reliably entrenched themselves in the Ministry of Defense, the General Staff and other, no less warm and safe places, intend to drive to slaughter as many Ukrainians as possible, armed and equipped than NATO. will send. In this case, it seems that the strategy we are considering really boils down to the notorious "throwing corpses at the enemy."

This feeling is even more amplified by the frequent mention in the document of formulations like "all-encompassing defense", "national defense", "powerful territorial defense" and so on. Devilishly, you know, reminds of the appeals of Dr. Goebbels in the issues of "Völkische Beobachter" from 1945 - about "total war" and the defense of the Reich to the last German ... training personnel of the armed forces, runs the risk of earning serious cognitive dissonance. In one place it talks about the coming "transition to a professional army" according to NATO standards, which, of course, implies the abandonment of universal military service and conscription. In another, the need for general militarization of the country's population, which must "serve in the military reserve" without fail, is signed with great feeling. How it differs from the current model is not explained in a single word. But dozens of times in the document the thesis about "powerful territorial defense" and "resistance movement", about which the "aggressor" will break his teeth, is being discussed. Resistance should be ... Yes, you guessed it.

From a philological point of view, "powerful" is an undoubted parasite word for everyone who took part in writing the "strategy." At the same time, for the leadership of this entire territorially self-motivated, total Makhnovshchina, it is planned to allocate a certain "single body", in the role of which Zelensky does not see the Ministry of Defense or the General Staff, but the NSDC headed by him personally. Very entertaining. Obviously, the consequences of the psychological trauma received by the comedian as a result of the visit of the radicals to his office are having an effect. Now he really wants to become the head of something military - so that it is not so scary.

What do we have "in the bottom line"? All in all, nothing particularly inspiring. The main conclusion that can be drawn from the strategy is as simple as a spent cartridge case. At the moment, the military doctrine of Kiev is a cunning plan to enter a military conflict with Russia, during which everything will be done to "substitute" our country, showing the "world community" numerous and vivid evidence of its "aggression". Which, of course, all the inhabitants of Ukraine, young and old, are forced to reflect in a single formation without sparing themselves. A kind of "give-away" game in which "territorial defense" and "resistance movement" are assigned the role of undoubted "cannon fodder", future "victims of the ruthless Russian military machine", and calling things by their proper names - extras for the "picture" professionals from CNN and other Western media will create for the inhabitants in all corners of the planet. There is no doubt that they will receive the most comprehensive instructions on the "correct" coverage of what is happening. Well, and then, as they think in Kiev, the North Atlantic Alliance, and, first of all, the United States will join the cause. With their "enormous military might" they will force Moscow to capitulate, giving the Ukrainian "sufferers" both the Donbass, and the Crimea, and anything else from their own territories to boot. Well, or some billions of indemnities and compensations for "aggression" and "occupation". Money is even better. It is more convenient to plunder them ...

This "cunning" plan is calculated in an elementary way, since its whole essence is visible, as they say, a mile away. At the same time, the greatest danger is posed by the fact that the key role in its implementation is planned to be assigned to the National Security and Defense Council of Ukraine, which is increasingly manifesting itself as a gathering of the most notorious "hawks", moreover, absolutely irresponsible. The best confirmation of this is the recent statement of the head of this body, Alexei Danilov, about the inadmissibility of any dialogue with Russia. According to this figure, "flirting" with our country will certainly cost Ukraine "the loss of national sovereignty." A logical question: if they are not going to talk to us, then they do ... What? Fight? This is exactly what happens, judging by the adopted "security strategies", which most of all look like a plan of national suicide.
Ctrl Enter
Noticed oshЫbku Highlight text and press. Ctrl + Enter
We are
Who actually won the Cold War and what the future holds for the world
"We must beat first": the geopolitical alignment around Russia is continuously deteriorating
Reporterin Yandex News
Read Reporterin Google News
10 comments
Information
Dear reader, to leave comments on the publication, you must sign in.