Crimea is fortified with airborne troops 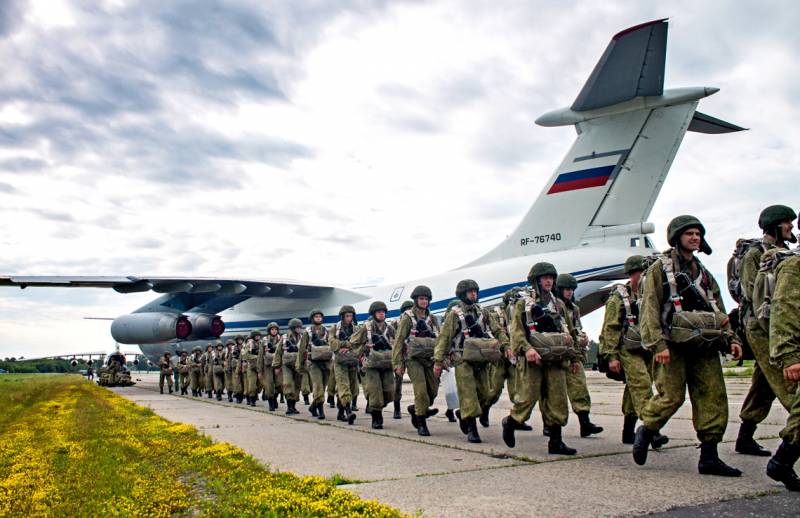 Curious changes are now taking place along the military line in the Crimea. The peninsula is one of the most protected regions of the Russian Federation: an army corps, combat aircraft, the most modern air defense systems, coastal missile systems are stationed here, the Black Sea Fleet is based, which is armed with Caliber cruise missiles. But now the Ministry of Defense of the Russian Federation is demonstratively transforming Crimea into an unsinkable "landing ship", from where it will be able to operate quickly in the Transcaucasus, and in Syria, and even in neighboring Ukraine.


The head of the military department Sergei Shoigu said about the upcoming changes in the structure of the Airborne Forces:

As part of building up the combat capabilities of the troops, this year it is planned to complete the deployment of the third airborne assault regiment of the 76th division in Pskov, and by the end of the year to reorganize the 56th airborne assault brigade into the 56th airborne assault regiment with a permanent base in Feodosia.
In theory, the airborne assault regiment is smaller than the brigade, but the key point in this matter is its redeployment on a permanent basis from the Volgograd region to the Crimea. There, in Feodosia, he will strengthen the already existing separate 171st Airborne Assault Battalion of the 7th Airborne Division, created in 2017. The battalion is 70% formed from contract soldiers, most of whom are local residents of the Crimea. This unit is armed with modern technique and small arms, highly mobile and capable of performing tasks not only on the peninsula, but also beyond. And now the new 56th Airborne Assault Regiment was sent to strengthen it. Why is this so important?

Crimea is a very special area for the RF Ministry of Defense, where it is necessary to have a rapid reaction force. A hostile Ukraine is across the border, dreaming of returning the peninsula. There is the problematic Nagorno-Karabakh nearby, where the long-standing territorial conflict has not yet been fully completed. Even farther away is Syria, where unfriendly Turkey stands behind the terrorists operating against the government army of the SAR. It is not surprising that Crimea and the North Caucasus are in the area of ​​responsibility of the 7th Guards Airborne Assault (Mountain) Division. The airborne troops themselves are practically universal: they can include tank companies, artillery brigades, electronic warfare and drones companies, mountain and diving units. At the same time, they are extremely highly mobile, they can be transferred by VTA aircraft and landing ships. These are the real forces of rapid reaction of the Ministry of Defense of the Russian Federation.

The 7th Guards Airborne Assault (Mountain) Airborne Division is essentially a small army capable of performing a wide range of combat missions. It was formed in 1948, its fighters fought in Afghanistan, carried out a peacekeeping mission in Abkhazia and participated in both Chechen campaigns. In 2005, the Russian military department divided the Airborne Forces into three components: airborne, airborne assault and mountain. The selection of the latter as an independent one was influenced by the difficult experience of conducting hostilities in the Afghan and Caucasian mountains. The 7th Airborne Division is the mountain division. The most stringent physical condition requirements are imposed on its fighters, which must ensure the ability to perform combat missions in difficult terrain and in bad weather. The paratroopers receive the best weapons and equipment.

Thanks to high-quality training, the 7th Guards Division is probably the most combat-ready division in the Russian Airborne Forces, therefore, the most problematic area is in its area of ​​responsibility: the Crimea and the North Caucasus. In 2019, the paratroopers conducted large-scale exercises on the peninsula, in which 40 Il-76 VTA aircraft took part at once. The landing was carried out simultaneously in two parallel streams of 20 aircraft each with a minimum altitude (from 600 to 900 meters). In March 2021, another airborne exercise was held in the northeast of Crimea, in which assault and army aircraft and helicopters, seven Il-76 transport aircraft, 500 units of military and special equipment, as well as 2000 servicemen were involved. In parallel with this, the landing on the unequipped coast of the self-propelled artillery division of the airborne assault battalion from the large landing craft of the Black Sea Fleet of the Russian Federation was being practiced.

Very interesting and meaningful maneuvers for those who understand. Undoubtedly, the redeployment of the 56th Airborne Assault Regiment to Feodosia on a permanent basis should increase the combat capabilities of the 7th Guards Airborne Assault Division of the Airborne Forces.
Ctrl Enter
Noticed oshЫbku Highlight text and press. Ctrl + Enter
We are
"Lock up the Black Sea Fleet": the Naval Forces of Ukraine was headed by an extremely competent officer
“Crimea Fortress”: how many Russian troops are deployed on the peninsula
Reporterin Yandex News
Read Reporterin Google News
8 comments
Information
Dear reader, to leave comments on the publication, you must sign in.