What if Russia recalls its ambassador from the United States? 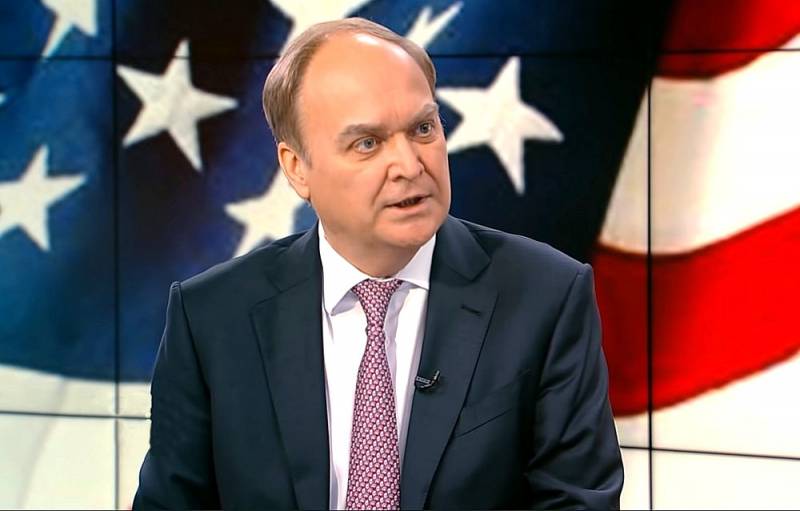 Since 2014, Washington has been waging a real diplomatic war against Moscow. Officials of the Russian Foreign Ministry are being expelled, Russian diplomatic missions in the United States and American diplomatic missions in Russia are closed. Observers note that the intensity of what is happening has surpassed even the era of the Cold War. But, if you take a closer look, it becomes clear that the White House attack is not so much against our country as demonstratively against its president.


After the recent scandal with incorrect public statements by President Joe Biden to his Russian counterpart, Vladimir Putin, Russian Ambassador to the United States Anatoly Antonov was recalled back to Moscow for consultations. According to him, he himself does not yet know when he will be able to return to Washington, and expressed regret that the two great powers are quarreling instead of jointly confronting common threats. By the way, it's really not a fact that Anatoly Ivanovich will be able to fly to the United States again, since he himself is unique in his own way: he is the only ambassador in the world who is under international sanctions. However, we are not talking about the future career of this career diplomat. Let's try to recall the most striking episodes of the political confrontation between Russia and the United States with their allies over the past few years.

For example, after the scandalous election results in 2016, when, unexpectedly for many, the representative of the Democratic Party, Hillary Clinton, was defeated by Republican Donald Trump, the losing side could not accept them with dignity and began to look for "extreme" ones. The "guilty" were found very quickly - the notorious "Russian hackers" working for our special services, and the "troll factory" of the oligarch Yevgeny Prigozhin, close to the Kremlin. In any case, this was stated in Washington and in response they imposed sanctions against several Russians, as well as the FSB and the GRU. In pursuit, the State Department declared 35 Russian diplomats persona non grata and ordered them to leave the country within 72 hours, and forbade the rest to use special embassy dachas. President Vladimir Putin reacted extremely peacefully, saying that the Russian Foreign Ministry would not take symmetrical measures against American diplomats, and at the same time invited their families to the Christmas tree:

I invite all the children of American diplomats accredited in Russia to the New Year and Christmas tree in the Kremlin.
In Washington, such an approach was not appreciated, and the US Congress passed a bill allowing the imposition of sanctions against domestic oil and gas companies. As a countermeasure, Russia has decided to cut the number of US diplomatic staff by 755 people. True, it turned out that most of them were citizens of the Russian Federation, working for hire. In response, in 2017, the United States expelled our sales representatives from two buildings in the American capital and New York, as well as from the consulate in San Francisco. After that, two dozen policemen showed up with a "round and inspection". Moscow called the incident a raider seizure of Russian property and sent a note of protest.

But beyond the "interference in the American elections" in 2016, which is attributed to the Kremlin and the oligarchs close to it, much more serious accusations were cast on President Putin in 2018. Recall that then in the British town of Salisbury, famous throughout the world for its cathedral spire, the poisoning of the former Russian deserter agent Sergei Skripal and his daughter Yulia took place. This crime was allegedly committed by "the GRU agents Petrov and Boshirov" using the "Novichok" chemical warfare agent. To uncomfortable questions, why did they even need to do this, why it is so difficult and why, after the impact of the terrible chemical weapons, both victims remained alive and practically healthy, the Western special services have only one answer: "because Putin."

Approximately with this wording, another demarche began with the mass expulsion of Russian diplomats. Great Britain, where this unfortunate event took place, expelled 23 people, the United States - 60 at once, and only 26 countries, in solidarity with London, expelled 140 of our diplomats in total. Washington, as you can see, showed the greatest activity, and at the same time closed the Russian Consulate General in Seattle, radically complicating the life of our compatriots on the East Coast of the United States. In 2020, President Donald Trump decided to close the American consulates general in Russia, Vladivostok and Yekaterinburg. In the Far East, this has been done forever, and in the Urals, the work of the diplomatic mission has been suspended for an indefinite period. As a result, a visa for a trip to the United States can now be obtained only at the embassy in Moscow, which is extremely inconvenient for the residents of our vast country.

And then there was the case of the "poisoning" of Alexei Navalny by the same "Novichok". According to the oppositionist, Vladimir Putin personally "ordered" his murder. According to the logic of the head of the FBK, the President of the Russian Federation does not like simple ways and is persistently trying to poison someone for some reason with chemical weapons, but still unsuccessfully. And again, in this case, foreign diplomats noted themselves, who massively came out to support Navalny, who was arrested upon his return to Russia from Germany. Moscow was forced to expel three European diplomats whose behavior went beyond acceptable lines.

What do we see in the end? For several years in a row, the West has been waging a real "diplomatic hunt" against Russia, or rather against its president. Vladimir Putin and his closest associates have been consistently putting “flags” on the issues of “interference in the American elections” and the repeated use of the Novichok chemical warfare agent. The Russian president is already made a "murderer" in plain text, and our country is turned into an outcast. What for? Probably in order to present the domestic elites with a fundamental choice of who they are with. With all the ensuing consequences for the Kremlin.
Reporterin Yandex News
Reporterin Yandex Zen
8 comments
Information
Dear reader, to leave comments on the publication, you must sign in.