Will Russia and China start a clash with the United States by leaving SWIFT? 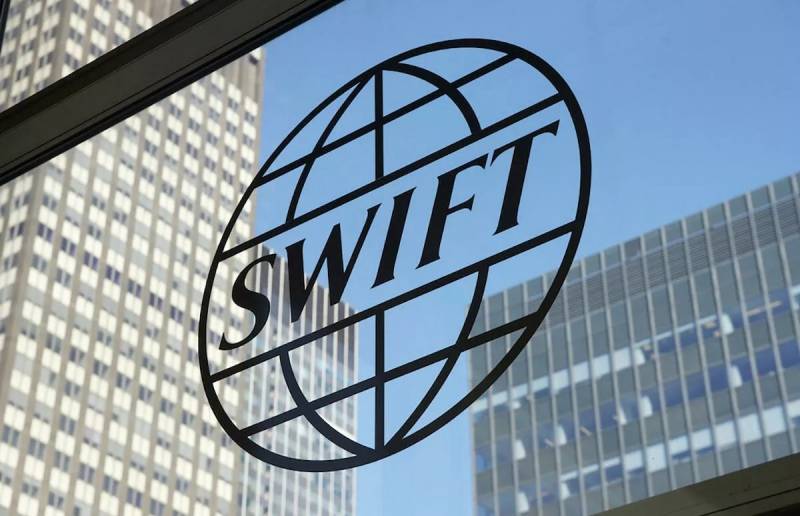 With all the attention that was paid in the domestic and world media to the visit of Russian Foreign Minister Sergei Lavrov to China, it seems that this event has so far been meaningful and far from fully appreciated. It is quite possible that it was in the process of the talks held in Beijing between the head of our diplomacy and his Chinese counterpart Wang Yi that the very “new era” was launched, the anticipation of which the whole world lives today. Or, at least, the last step has been taken towards its beginning. In any case, the document adopted as a result of them directly speaks of "global governance." And it is perfectly understandable that both the Russian and Chinese sides see such centers not at all in Washington or Brussels.


Moreover, during the final press conference from the lips of Lavrov sounded not only the usual and even obligatory for such events, assurances of cordial friendship to the host country and words about "enormous prospects for cooperation" with her. Something very specific and very important was said. Namely, the direction in which Moscow and Beijing intend to give the United States the first serious "battle" was announced.

In this case, of course, this is about the statement of Sergei Viktorovich, where he directly points to "the need to reduce sanctions risks by abandoning the dollar in interstate settlements and avoiding the use of payment systems controlled by the West." In this case, there could be only one such system - SWIFT (Society for Worldwide Interbank Financial Telecommunication). There have been so many talks in recent years that "excommunication" or, simply put, disconnection of our country from it will become "the final act of Western sanctions" in recent years. Unfortunately, many of them were openly speculative and aimed to generate panic about such a step by our "sworn friends". Some tried to present the disconnection of Russia from SWIFT as almost the end of the world - at least in economic terms. In fact, this is not the case at all.

First of all, we are not talking about “complete financial isolation of our country from the whole world”, as some “smart people” claim, but just about depriving it of the opportunity to use the most developed and generally accepted system of exchange of banking information and payments. Yes, it is considered the safest, most reliable, fastest ... But - among many others. SWIFT is not at all a unique tool, which cannot be replaced in principle. Yes, the blow to the domestic financial system will be quite tangible. However, it is by no means fatal. Today the only country in the world against which the "world community" has taken such a step is Iran. And even then, in his case, only half of the banks were “cut off” from SWIFT. Only in Iran at that time there were three dozen of them, and in our country the number of them exceeds eight hundred.

Another extremely significant point is that blocking access to this system will, in fact, be the last step that the “collective West” can take against Russia without officially declaring war on it. Thus, the arsenal of "levers of influence" on Moscow will be exhausted, because the next item on the list of methods of "coercion into democracy" is the delivery of missile and bomb strikes. It is doubtful that they would go for such a thing even in the conditions of the current aggravation. Another important thing is that SWIFT has the strongest dependence on the United States solely due to the fact that the vast majority of settlements in it are made in US dollars. In fact, this is a European system with headquarters in Belgium. That is, Washington cannot de jure directly order its leadership. And to be honest, just for the countries of the European Union such a step would not even be the notorious "shot in the leg", but sheer suicide.

Suppose that one day, far from being a fine day, a decision to block Russia's access to SWIFT will still be made. And what do you want to do with the payments for the same energy carriers ?! They will not be supplied to the European Union for nothing or in debt to the European Union, which has "thrown" its partners so abruptly. Not to pay with "cash" with suitcases! In such a case, those countries of the Old World who do not have a suicidal desire to freeze to death in the name of the triumph of world democracy will have to pay for our deliveries using the Russian Financial Messaging System (SPFS). Not in dollars, but in euros - that's even better. The SPFS was developed and implemented at the very beginning of the "sanctions rage" that swept the West, in 2014 and is working quite well. So far, mainly the EAEU member countries are connected to it. However, banks in Germany and Switzerland also work with it - more than 11 thousand financial organizations in total. As of the beginning of this year, SPFS within Russia has already reached a volume of one fifth of SWIFT traffic. If the alternative to its use is in the form of a complete refusal economic ties with our country, the Europeans will "catch up" too. Fortunately, this is not a problem.

The time has come?

In fact, disconnecting Russia from SWIFT will not mean "isolation" at all. Transactions will take longer, they will rise in price, financial "chains" will become longer and more complex, but the world will not collapse. However, this is in the event that the initiative in this matter comes from our Western "partners". And if from our country? If we ourselves refuse to use the system controlled by the de facto unfriendly states? This will certainly not be easy to do. Discussions about the urgent need to “de-dollarize” the world economy have been heard for a long time, and not only in our country. At the same time, earlier all financial experts agreed that if such a process goes on, then everything within its framework will be very "slow".

Now the situation has changed dramatically and it is not so much a matter of Moscow's intentions as of a very serious adjustment of Beijing's position. Let's not be cunning - Russia alone is not yet able to fight against dollar hegemony. And even an alliance with Iran, Turkey and other countries that cannot live from American sanctions, and who sleep and see how to get rid of them once and for all, will not significantly change the balance of power in this confrontation. China is a completely different matter. The strongest economy in the world, the largest trading partner of the absolute majority of states on the planet (including the United States). With a strong desire, the Celestial Empire may well put an end to the "dollar era". Another question is that its leaders did not have such a desire until now. The Chinese are a non-conflict people, accustomed to professing the principle of softness and slowness, and at the same time, excuse me, striving to sit simultaneously not even on two, but on as many chairs as possible.

But right now these chairs began to rapidly crawl to the sides, carrying the risk of a rather hard and painful fall to the Chinese comrades. Beijing hoped that with the change of the White House owner, the “trade war” with the United States, senseless and exhausting for the economies of both countries, would end. The meeting in Anchorage, which caused a stir all over the world, showed that under Biden, the Americans not only are not going to give up their attempts to crush the PRC with the help of sanctions, but also intend to "teach it democracy", publicly defaming and scolding, like boys, representatives of the upper echelon the diplomatic corps of this country. The sharp outburst of emotions of the usually extremely restrained Chinese diplomats during the summit that ended in a complete fiasco in Alaska shows that such a turn was a surprise for them, and very unpleasant.

The next "surprise" of the same kind can be considered the introduction by the European Union of sanctions against a number of Beijing officials for alleged "wrong" actions in the Xinjiang Uygur Autonomous Region. Blindly following in the wake of Washington, Brussels thus rudely and imprudently got into purely internal Chinese affairs, which aroused the understandable anger of the Celestial Empire, which hoped that at least among the Europeans pragmatism would prevail over the agenda imposed on them from across the ocean, which had nothing to do with their interests. As it turned out, in vain. Even a country with the most pacifist views can be persuaded that there is no point in settling matters peacefully. The "Collective West" in relation to China has made tremendous efforts in this direction. Congratulations - everything worked out. Beijing today is very belligerent and no longer inclined to concessions and compromises.

I will not overload my story with statistical calculations and other figures. Moreover, anyone can easily find data on what share of global trade accounts for operations with the participation of the Celestial Empire. She does not need to make any dramatic gestures to mark her "break with Western financial institutions" - just declare her unwillingness to sell or buy anything for dollars. Do you think this will strongly stop Saudi Arabia, which dreams of supplying its oil to China with millions of barrels, or Qatar, which recently signed an agreement with Beijing on the supply of 2 million tons of LNG annually? They will trade for yuan, how cute. Will Europe balk? Well, let's see how they do it. I remember that at the very beginning of the coronavirus pandemic, when the disease was fought back in China itself, automobile factories stood up all over the world - they lacked something there. Either some wiring, or a relay, or something else that is done exclusively in the Middle Kingdom. The West itself has for decades created its dependence on China - technological, trade, and subsequently financial. Without Chinese supplies of a wide variety of things - from components and assemblies for their own equipment to the most common consumer goods, the same Europe will not be able to live in the same way as without Russian energy resources.

In principle, the same SWIFT can not be abandoned - it will be enough just to "clear" the bulk of transactions carried out through it from being tied to cut American paper. Sergei Lavrov's words can be interpreted in this vein. On the other hand, if we take seriously the talks about "global governance in modern conditions" that were held in Beijing with his participation, then the new world, which Moscow and Beijing can and should begin to shape right now, will need new global systems. Financial - including.
Ctrl Enter
Noticed oshЫbku Highlight text and press. Ctrl + Enter
Reporterin Yandex News
Reporterin Yandex Zen
14 comments
Information
Dear reader, to leave comments on the publication, you must sign in.