Russia will have to choose between the United States and China, and this does not bode well for it 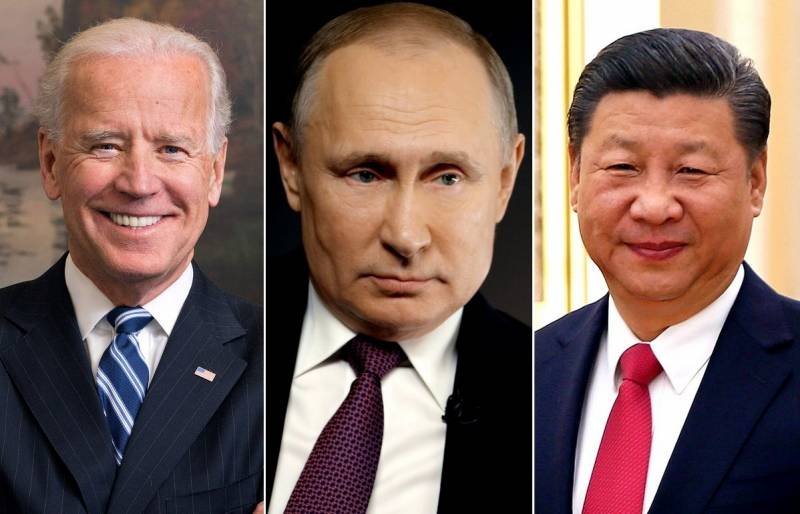 The recent spate of high-level US-China squabbles has highlighted the obvious fact that there will be no fundamental warming between the superpowers with the arrival of Joe Biden in the White House. On the other hand, an escalation to a still unknown degree is more than likely.


If for Donald Trump it was trade issues that were the main ones, and he devoted little time to "promoting democracy", then for the current administration, most likely, everything will be exactly the opposite.

Today's China can be called a rising empire, although it still has its own limitations, for the notorious Chinese world - "Pax Sinica" and its vision of the future - seems to be intended only for ethnic Chinese.

This is what distinguishes it from the alliance of Western democracies, the Soviet socialist idea or political Islam, where the right, at least, of entry for the neophyte has always remained free.

And even then, not all Chinese in the world are happy to be reunited in what is the modern PRC. Suffice it to look at the desperately protesting Hong Kong, the rapidly arming Taiwan and the extremely ambiguous Singapore, which at any convenient occasion emphasizes its isolation and sovereignty. In addition, a huge number of Chinese immigrants are buying up housing in the United States, Canada and Australia. There is no reverse flow - people of the West are ready to come to the Celestial Empire to work or to have fun, but very few decide to associate their future with China.

While clearly losing the battle for soft power, China can obviously try to rely on hard power. And this is not speculation. Almost all international analysts note the steady tightening of the external policy Celestial Empire over the past decade. And 2021 has every chance of becoming another frontier on this path. However, even the most powerful country needs allies here.

"Bamboo Curtain" is a term that is not very often found in journalism, even in foreign ones, and is practically absent in Russian. Its essence is quite simple - it is the "Iron Curtain" in Asia, separating the socialist countries of the continent (as a rule, totalitarian regimes, of varying degrees of odiousness) from the states of the first and third worlds.

This border was very visible. It ran - and is still there - between North and South Korea, totalitarian North and authoritarian South Vietnam, between Maoist China and the bright neon Hong Kong of the period of British colonial rule. The peculiarity of the "bamboo curtain", in contrast to its "iron" counterpart in Europe, was that they often - and often successfully - tried to move it. Mostly in favor of the Reds.

What will the new "bamboo curtain" be like? Some of its outline may be visible right now. In 2014, a military coup took place in Thailand and the then junta leader Prayut Chan-Ocha is still in power, although his rule is periodically shaken by protests, and the English-language media often accused him of an openly pro-Chinese position on many issues. Although Thailand and China are very close, these countries are separated from each other precisely by the territory of Myanmar, in which the military also came to power this year. And just as a number of foreign publications assert, the new government is noticeable by its pro-Chinese tilt.

However, history suggests that Third World autocrats are known for their very fickle dispositions. They are willing to take (especially for free), but are not very inclined to provide any services in return. On this, the late USSR was repeatedly burned, with a generous hand containing such figures all over the globe, even despite the very conditional adherence of many of them to socialist ideas. To what extent China has foreseen this feature is an interesting question.

In any case, in addition to soft power, the Celestial Empire also has a very real club of hard power. Which has not yet been used for its intended purpose, but everyone knows that it is ready.

For the Russian Federation, the new bipolar world does not bode well. Sooner or later, Moscow will face the need to choose between one side or the other.

Joining one of the parties in the new world order will inevitably lead to the fact that the one - whatever it may be - will inevitably require concessions: economic, political, and also, possibly, territorial. Not immediately, but at some point it will happen. An attempt to sit on two chairs, as practice shows, is more a disadvantage than a special geopolitical trick. For at a fateful moment, such a "cunning" runs the risk of being left without allies at all, but with obvious enemies on both sides of the barricades.

In addition, an attempt to portray a "third party" in the battle of superpowers, having behind the twelfth GDP in the world and a critical dependence on imported goods for a number of positions, is hardly reasonable on either side.

The long economic and political stability of both the United States and China was ensured by the presence of a multimillion-dollar middle class, which is the main pillar of the existing order in each case. In the United States, this was achieved with relative democracy, in the PRC, it was a little different, although socioeconomic liberalization took place there as well. There is no influential middle class in Russia - attempts to create it remained somewhere in the already distant XNUMXs, with their petrodollar boom and civil liberties.

It is also extremely difficult to talk about any external attractiveness of the socio-political model of the Russian Federation of the 2020s. Attempts to appeal to the Yalta peace and the events of the Second World War will not be successful in the international arena. For the conditionally "Yalta" world order was broken twice. First, in the XNUMXs, with the beginning of the Cold War. Then - with the collapse of the world socialist system. Now it breaks down for the third time, with an as yet unknown outcome.

Nevertheless, both superpowers will fight for Russia for an obvious reason. The geographic location makes the Russian Federation a much more important country than any single power in Europe or Asia. And its joining one of the blocs is quite capable of deciding the outcome of the new Cold War.
Ctrl Enter
Noticed oshЫbku Highlight text and press. Ctrl + Enter
We are
"We must beat first": the geopolitical alignment around Russia is continuously deteriorating
Ten "defeats" of Putin
Reporterin Yandex News
Read Reporterin Google News
55 comments
Information
Dear reader, to leave comments on the publication, you must sign in.