Oil smuggling: Americans deliberately expose themselves to the attacks of the Russian Aerospace Forces in Syria 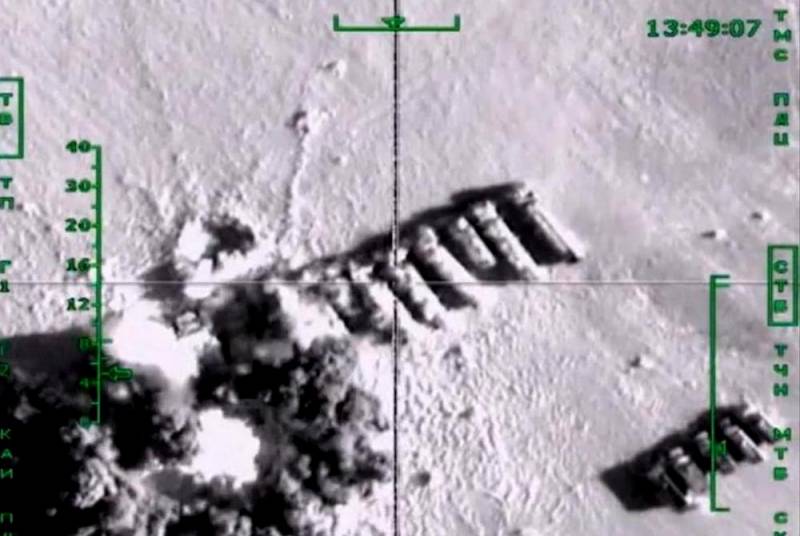 The United States has put the Russian military in Syria in a difficult position. To ensure the safety of convoys of gasoline tankers illegally exporting Syrian oil to neighboring Iraq, the US military took them under their direct protection. The local news agency Sana reports. A natural question arises, how the Russian Aerospace Forces should now act, given that Moscow considers the presence of the United States and its allies in the SAR illegal, and the trade in "black gold" - smuggling?


At first glance, the simplest solution in such a situation would be to simply bombard convoys consisting of tens and hundreds of fuel tankers moving from the oil fields of Deyz ez-Zor towards the Iraqi border, and whoever did not hide, we not guilty. Why not? After all, the Russian OTRK "Iskander-M" from the Khmeimim airbase in Latakia are beating the "logistics centers" of terrorists in Idlib, destroying tank trucks loaded with oil and oil products intended for the Turks and pro-Turkish militants. But, unfortunately, everything is much more complicated than we would like.

On the one hand, Syria and Russia, as its ally, have every right to do so. The American military is on the territory of the SAR without the consent of official Damascus, that is, they are invaders. The United States occupied the eastern province of Deir ez-Zor, rich in oil fields, and took it under its control, in other words, they are also occupiers. At the same time, they also directly support the illegal armed groups of the Syrian Kurds, as they would say in Ukraine, the “separatists”, for pressure simultaneously on the government of Bashar al-Assad, and at the same time on neighboring Turkey. It's ironic, isn't it? Policy double standards of Washington in all its "glory".

At the same time, the Pentagon purposefully captured and retains exactly what is of real value in Syria, destroyed by a long-term war, its oil. Instead of going for export through official channels, giving revenues to the state budget of the SAR, "black gold" flows through various illegal channels to Turkey and Iraq, where it is later resold. Allegedly, the United States transfers part of the income from oil sales to its Kurdish "proxy", where the rest goes is a question. Why do Americans consider it possible to behave this way? In 2019, President Donald Trump commented on this as follows:

We have the oil, and we can do with it what we want.
Well, you understand, by right of the strong. The comments of various domestic and foreign liberal Americanophiles, who refer to the fact that it is, they say, Kurdish oil, and the Kurds do not want to obey the regime of Bashar al-Assad, are kind of “touching”, so they do whatever they want with their oil. Then let us all be consistent, and Ukraine will forget about its claims to the Crimean assets it lost, okay? In general, both the Syrian military and the Russian, who are in the SAR at the official invitation of Damascus, have every right to stop the illegal export of natural resources from the country by the invaders and invaders.

On the other hand, it will be problematic to do this directly for the RF Ministry of Defense. Yes, US troops are in Syria illegally and without the consent of the country's official government. However, Washington “justified” its aggression against a sovereign state with a plausible pretext for combating international terrorism, and at the same time “covered up” dozens of other countries in this matter. In 2014, the so-called Global Coalition to Counter the Islamic State of Iraq and the Levant (ISIL) was formed in Brussels, an international coalition of 60 countries, created without the consent of Damascus and the UN sanction. Its goal was to fight against the terrorist groups "Islamic State" and "Front al-Nusra" banned in Russia. The Central Command of the US Armed Forces has assumed the honorable responsibility of leading this structure.

Thus, having “covered up” several dozen other states in military intervention, Washington elegantly “substantiated” its presence in Syria. The coalition really fought with terrorist groups, but at the same time it was building up armed Kurdish groups in opposition to the official authorities of the SAR and Iran with its "proxy". And at the same time, the oil was also "cut off", having stolen from the official Damascus the source of financing necessary for the restoration of the country.

For Moscow, the difficulty lies in the fact that the American military cannot be bombed so easily, even if they are escorting a convoy with stolen oil. The former head of the Pentagon, Mike Esper, has bluntly stated that the United States will protect the oil fields of Deir ez-Zor by force. And I must say that in 2018 they have already demonstrated the seriousness of their intentions by extremely harshly defeating a detachment of "Wagnerians" who were trying to recapture the refinery near Hisham. Since these were not the Russian military, but mercenaries through an unofficial PMC, the RF Ministry of Defense did not react accordingly. But could it at all?

The question is extremely controversial. If the Russian Aerospace Forces are bombed directly at the American military, then the "response" will follow immediately. The Russian contingent in Syria is relatively small, its supply is carried out either by air or by sea through the Turkish straits. The United States has an entire network of military bases in the Middle East, stationed on the territory of numerous allies. In the event of an armed conflict with the United States, the Russians will find themselves in a blockade and an extremely unenviable position. In order not to provoke the Ministry of Defense of the Russian Federation to use nuclear weapons, the Pentagon will probably act in response to the bombing in a harsh but pointed manner, making it clear that it can do more.

A direct war between the two nuclear powers is disadvantageous to both Washington and Moscow. Since the days of the Cold War, both sides have learned how to effectively operate through a "proxy". The Americans have taken a rather clever step by taking the Syrian "oil business" under their direct protection. A reasonable response would be to support the local forces more actively with weapons against the invaders. "Partisans" can set up ambushes, fire at convoys with fuel tankers from cannon and rocket artillery. The SAR government army could strike them with “Dots”. And Russia could help the Syrians with the supply of appropriate weapons. After all, this is their country.
Ctrl Enter
Noticed oshЫbku Highlight text and press. Ctrl + Enter
We are
"We must beat first": the geopolitical alignment around Russia is continuously deteriorating
Will Russia manage to drive Americans out of oil fields in Syria
Reporterin Yandex News
Read Reporterin Google News
24 comments
Information
Dear reader, to leave comments on the publication, you must sign in.