Gas for free: Power of Siberia becomes even more disadvantageous for Russia 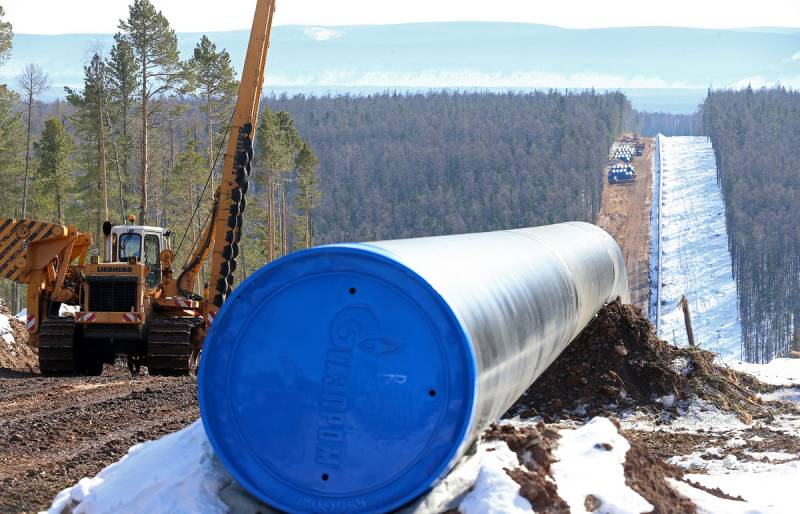 The Power of Siberia gas trunkline was rightfully considered a symbol of Russia's “turn to the East”. Concluded after years of negotiations in 2014, it was supposed to mark the beginning of the diversification of gas supplies by the state corporation Gazprom and a decrease in its dependence on the mercy of the West. Even then, voices of doubt sounded, indicating the unobvious profitability of this project, but they were not heard. In 2021, it becomes clear that the payback period for Power of Siberia will be very seriously extended.


The pipeline was supposed to connect two gas fields in Eastern Siberia, Chayandinskoye and Kovyktinskoye, with China, supplying China with up to 38 billion cubic meters per year after reaching full capacity. It should be borne in mind that the Kovykta field is still being developed, at present a gas pipeline is being built from it to the already functioning Chayandinskoye field, the length of which will be 803 kilometers. We will talk more about the resource base of the project a little later.

Why does Beijing need Power of Siberia? China is one of the world's largest consumers of oil, gas and other natural resources. The demand for energy in the Middle Kingdom is growing, and the presence of a main pipeline directly from Russia, when there are no transit countries, would diversify the risks of the Chinese economics in case of interruptions in LNG supplies. Given the deterioration in relations with the United States, Beijing's fears are not without some basis.

Everything is clear with the PRC, but why does Russia need Power of Siberia? The advantages of the gas pipeline include the opportunity to enter the growing Chinese energy market, as well as the implementation of a number of related projects, for example, the construction of the Amur gas processing plant, one of the largest in the world in terms of capacity. Moscow has spared 1,1 trillion rubles for the pipeline, compared to an initial estimate of 800 billion. But this is where the positive ends for now. More and more questions arise about the prospects for the commercial payback of this project by Gazprom.

The contract for supplies to China was concluded for 30 years. The specific terms of the contract were a trade secret, but they could not hide the sewing in the sack. The usual practice of our "national treasure" was the conclusion of an agreement on gas supplies pegged to oil quotations with a time lag of six months. However, in this case, the top managers of the state corporation showed originality, linking not to “black gold”, but to the products of its processing, fuel oil and gas oil, with a lag of not 6, but 9 months. And it did its dirty deed.

In the "coronavirus" 2020, in addition to the pandemic, the world is faced with the consequences of the "six-week" oil war. As a result, the quotes of "black gold" set an anti-record, even going into the negative zone for some time. The consumption of not only crude oil, but also petroleum products has decreased. Now Russia is forced to pay a high price for such features of the export contract. At the beginning of 2021, one thousand cubic meters of gas in Europe cost $ 257. In Asia, where there is no such a developed pipeline network, they already gave $ 587 per 120 cubic meters of LNG. For comparison, the "blue fuel" coming from Russia through the "Power of Siberia" now costs China less than $ XNUMX per thousand cubic meters, which by today's standards is literally for nothing.

Somehow it doesn't smell like commercial profit. For understanding, the union Belarus, we sell gas for 128,5 dollars per thousand cubic meters. "Blue fuel" supplied to China from Uzbekistan now costs Beijing $ 151 per 162 cubic meters, from Kazakhstan - $ 187, from Turkmenistan - $ XNUMX. Yes, Gazprom's top managers know how to do business, you won’t say anything. Smart Chinese have now increased the purchase of free gas at times, trying to stock up on it for future use. And after all, no one guarantees that this is a one-time temporary phenomenon.

Yes, after a while prices for petroleum products will rise. However, the European Union, the United States, and China itself have relied on a radical reduction in fossil fuel consumption. In the coming years, will be introduced everywhere Technology receiving renewable energy, the number of electric vehicles around the world will only increase. Of course, there is no talk of a complete rejection of oil, it is a valuable source of raw materials for the chemical industry, but the announced and widely advertised global trend towards a gradual decrease in the consumption of "black gold" and its refined products can hardly be stopped. This means that over time, Russian "blue fuel" for Chinese consumers will also become cheaper.

In addition to all this, there are some doubts that Gazprom will actually be able to fulfill its contractual obligations to Beijing. The domestic press has already reported that the resource base of the Power of Siberia was assessed incorrectly and turned out to be less than expected. At the same time, some of the wells already drilled in the fields have become "disabled" due to a violation of technology, and therefore cannot produce the required amount of gas. Gazprom, which received an advance payment from China, risks embarrassing itself, with which some observers associate its activation under the Power of Siberia-2 project. Within the framework of this project, a jumper can be built between the two pipelines, and the first "Power" will then be supplied from the proven fields. The question is still where is the benefit for Russia.
Ctrl Enter
Noticed oshЫbku Highlight text and press. Ctrl + Enter
We are
Whose "invisible hand" got into the pockets of Europeans and what does Gazprom have to do with it?
Peace enforcement operation. Russia inflicts a preemptive strike on Kiev
Reporterin Yandex News
Read Reporterin Google News
28 comments
Information
Dear reader, to leave comments on the publication, you must sign in.