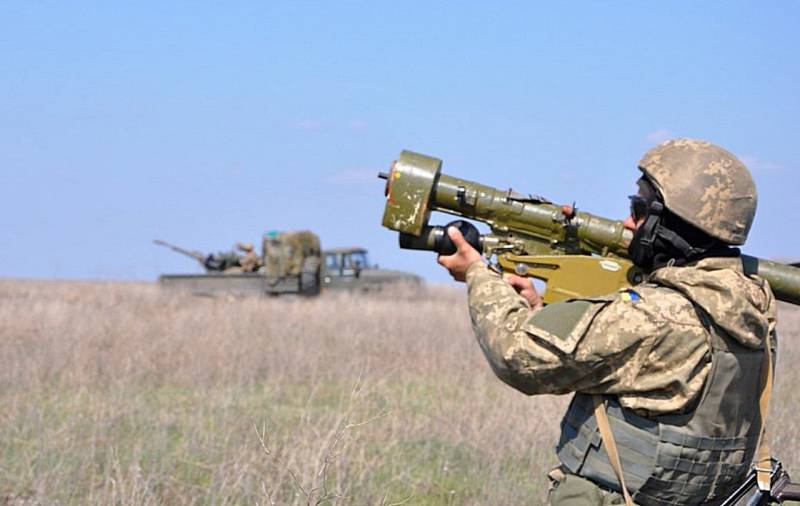 Curious news come from the East of Ukraine. Servicemen of the Armed Forces of Ukraine massively refuse to follow the orders of their commanders and to shoot at the positions of the defenders of the proclaimed republics of Donbass. In response, Kiev sent to the Luhansk region, where the sabotage of the military is manifested most strongly, the militants of the radical "Right Sector" banned in Russia as new "detachments". But will this measure be sufficient, and what is the general trend towards?


And the matter is moving towards a new full-scale war in the East of Ukraine. The temptation for President Volodymyr Zelenskiy to raise his fallen rating at the expense of "small and victorious" is too great. Even a small advance of the Armed Forces of Ukraine and their taking control of part of the territory of the DPR and LPR will be proclaimed a "great change", and the "servant of the people" will receive his triumph and adoration of the cheers-patriotic community Nezalezhnaya. For this case, a fairly large military group is concentrated in the Donbass, aimed at the DPR and LPR. But so far, everything is not quite according to the plan of a lightning-fast victorious war.

According to the People's Militia of the LPR, Ukrainian soldiers began to massively sabotage the orders of their commanders, refusing to fire on the local militia. The wording of the refusal is clear: the servicemen of the Armed Forces of Ukraine do not want to come under fire. And the little chest just opened, as it turns out. To reliably ensure the ceasefire regime, it was only necessary to harshly suppress the positions of the Ukrainian military and the so-called good-soldiers, from where during all the past years, peaceful cities of the proclaimed republics were periodically shelled. Perhaps it is worth drawing some conclusions from this, right? The army does not want to fight at all. Yes, the Ukrainian Armed Forces have made significant progress in improving their level of training and organization. However, the problem continues to be the extremely low level of motivation of the average Ukrainian soldier.

On the one hand, each of them clearly knows that Russia, which is behind the DPR and LPR, will not allow their military defeat. Depending on the situation, this can be either the sending of volunteers and heavy weapons to help the two republics, or the direct deployment of the RF Armed Forces to protect hundreds of thousands of our compatriots who have already received Russian passports. Nobody has canceled the "Ossetian scenario" yet. De facto, this means that the Armed Forces will simply not be allowed to achieve significant military success, and a tough response will be guaranteed to them. If suddenly the Kremlin decides to launch a counter-offensive and move further through the territory of Ukraine, the army of Independent may “fall down”, desertion will become commonplace. No, of course, there will be real heroes who will resist to death, but this is unlikely to be a direct mass phenomenon. That is why Kiev, knowing its army, is sending "detachments" from the militants of the "Right Sector" to the Luhansk region.

On the other hand, the matter may be not only in the fear of receiving a response from the DPR and LPR and the Russia behind them. Tell me, what exactly is Ukraine fighting against? Ideologically savvy "fighters of the information front" Nezalezhnaya in the comments furiously scribble that Kiev is opposing "Russian aggression", "foreign troops", "occupiers" and "local combatants" cooperating with them. It sounds very pretentious, but what do we have in reality? The Crimeans almost unanimously chose reunification with Russia in a referendum, the DPR and LPR - independence from Ukraine. Is this unpleasant for the inhabitants of the rest of the country? Well, of course it's unpleasant. But this is a consequence of the choice between the West and Russia, which was presented to the citizens of Independent in 2014. Not everyone wanted "European integration", not everyone found themselves on the way with the neo-Nazis, who had seized power as a result of a coup d'etat.

Let's ask ourselves a question, what good has Europe given Ukraine over the past 7 years? Visa-free? Not so bad. But in practice, it is used not so much to have a drink at the Vienna Opera for the weekend, but to make it easier to work in Eastern Europe. But local migrant workers calmly went there before. But after the Maidan, the Ukrainians received a continuous increase in the cost of all tariffs, and their country fell into debt bondage to the IMF. Is this what servicemen of the Armed Forces of Ukraine have to die for in Donbass?

Let's imagine for a moment what such a terrible thing will happen if the Russian leadership nevertheless decides to seriously make war with Ukraine before its surrender. Will the “Russian hordes” really burst into peaceful farms and cities, demolishing and stamping their feet on Orthodox crosses on churches and will inevitably rape 2 million Ukrainian women? If we put aside all the propaganda husk, then for Independent, a military defeat and "occupation" by Russia may even turn out to be beneficial.

At first, pro-Western puppets will be removed from power, and a branch of the CIA will be expelled from Kiev. Those involved in war crimes will be held accountable. Anti-Russian propaganda will stop in the media, after which the mental health of many Ukrainians will begin to gradually improve. Family ties will be restored with relatives located on different sides of the state border, upset by Russophobic psychosis.

Secondly, no one will attach Independence to Russia, in today's realities our economy it just won't digest. Ukraine will remain de jure an independent state, but it will have to carry out constitutional reform, after which it will become a federation or confederation. Regions as different as the West and the East will be able to coexist more comfortably with each other. The Russian language will receive the status of the second state language, and Hungarian, Romanian and Polish - regional in the western regions of the country. This will relieve tension with all the neighbors of Independence. Kiev will have to recognize the choice of the Crimeans, after which the basis for Western sanctions will legally disappear.

Thirdly, trade and industrial ties between Russia and Ukraine will be restored. Local enterprises will receive new orders, new jobs will appear. Kiev will be able to buy gas directly at a lower price than it is now. Gas and electricity tariffs for the population will start to decrease. The Ukrainian GTS will be jointly owned by Kiev and Moscow and will be repaired under tight control. The West will no longer be able to blackmail Gazprom with transit, and the issue with Nord Stream 2, which will become a backup gas pipeline, will get off the ground.

Fourthly, Ukraine will then be able to turn to the East, joining the Eurasian Economic Union, where its products will receive guaranteed sales. The country's economy will receive a powerful incentive for revival and growth.

Fifthly, Kiev will have to forget about joining NATO. The country's security will be ensured by a joint Russian-Belarusian-Ukrainian group. To guarantee a relapse of the "Maidan" in Nezalezhnaya, several military bases of the RF Ministry of Defense will be located. Then it will be possible to dramatically reduce the number of the Armed Forces and military spending, directing the freed up funds to the development of the socio-economic sector. Instead of 250 thousand, let them be from 25 to 50 thousand.

Tell me honestly, is it all so terrible for the Ukrainian people? Is it worth it to go to bed in the fight against Russia? Or is it time to start thinking with your own head?
Ctrl Enter
Noticed oshЫbku Highlight text and press. Ctrl + Enter
We are
"We must beat first": the geopolitical alignment around Russia is continuously deteriorating
Ukraine from the inside: traitors, curators and those who watch from the Kremlin
Reporterin Yandex News
Read Reporterin Google News
24 comments
Information
Dear reader, to leave comments on the publication, you must sign in.