"Presidential pogrom" in Kiev - what should Moscow be worried about? 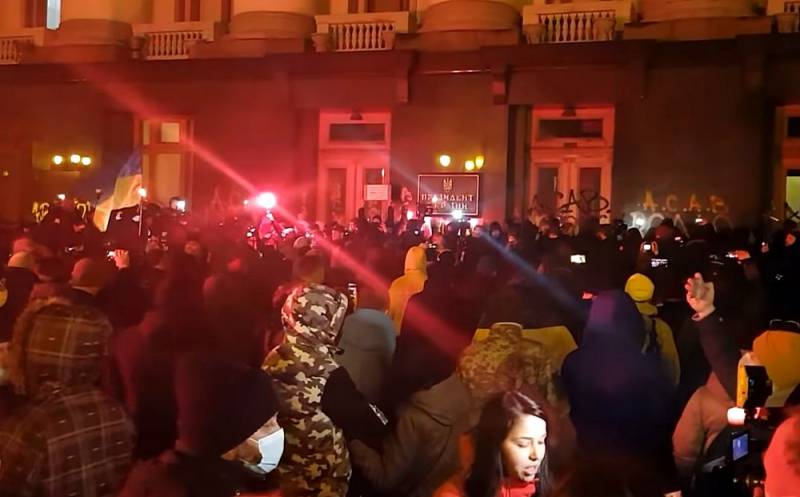 The unprecedented pogrom staged by radical nationalists against the office of President of Ukraine Volodymyr Zelensky, alas, can in no way be considered a purely internal problem of Kiev, which seems to have sunk to the complete loss of even external signs of statehood. We are talking about a country that has concentrated a rather large military grouping both on the borders of the Republics of Donbass, where many people already live with Russian citizenship, and directly near the borders of our Motherland. And also - putting forward specific territorial claims to it.


The main "actors and performers" of the disgusting Sabbath that unfolded on Bankova Street in Kiev on March 20 are those for whom hatred of everything Russian is not just an ideology, but, one might say, the meaning of life. Based on these points, everything that happens should be considered, making appropriate conclusions.

The minister is "devil", the president is a "sucker" ... Is there no more state?

Representatives of the most extremist nationalist groups who appeared on that day at the walls of the head of state's residence decided to “celebrate” the 25th anniversary of the former head of the “Right Sector” of Odessa, Sergei Sternenko, who is now within the walls of the pre-trial detention center. On February 23 of this year, the court, contrary to the expectations of the “patriots,” nevertheless plucked up the courage to sentence this murderer, drug dealer and outright bandit to seven years in prison for one of the numerous episodes of his criminal activity. In this case, it was about kidnapping, torture and extortion. The “activists” gathered under the president’s office demanded the immediate release of their “comrade-in-arms” on the grounds that he was a “true patriot of Ukraine” and all his victims were undoubted “quilted jackets” and “separatists”. Such is the uncomplicated "revolutionary expediency". The pogromists also put forward a number of additional demands - to release all "political prisoners" (that is, the most notorious radicals who managed to "get" a term under purely criminal articles), to dismiss the country's Prosecutor General Irina Venediktova and Interior Minister Arsen Avakov.
In a word, to admit once and for all that the radicals in the “post-Maidan” Ukraine, splashing saliva of “patriotic” slogans, are absolutely inviolable and have a cleaner immunity than a deputy’s one. And, consequently, they can do absolutely whatever they want - to poison the unwanted, commit any crimes, maim and kill people, declared by them "enemies of the nation." For a "better understanding" and deeper assimilation by the president of the ultimatum given to him, the crowd gathered on the square near his residence staged a very bright "show" that "pulls" several articles of the Criminal Code at once, not to mention the administrative one.

To begin with, the rally was, of course, unauthorized. Moreover, it took place at a time when a lockdown was already introduced in the Ukrainian capital, which clearly prohibits any mass events, even the most legal ones. However, all these are innocent childish pranks in comparison with what the "demonstrators" were doing at the walls of the "leader of the nation" office. Shouting and chanting insults at him (including with the abundant use of obscene language), the matter was far from limited. The windows and doors of the administration building were broken by raging radicals, its entire facade, walls, porch were painted with threats and abuse against him, as well as against the same head of the Ministry of Internal Affairs. Zelensky got the "honorary" title of "sucker", and the radicals called Avakov "the devil" in the presence of a thin chain of his subordinates. On the other hand, “warm” words were also found for ordinary policemen - the protesters abundantly covered all accessible surfaces with the inscriptions ACAB (All cops are bastards), or, in our opinion: “All policemen are bastards”.


It was not done, as it should be on a good show, without pyrotechnics - from the explosions of firecrackers, the ears of those present were pinched, and the fireworks launched over and over again (despite, again, the direct ban on them in force in Kiev) caused several fires, which had to be extinguished firefighter. The apotheosis of the "peaceful action" was an attempt to set fire to the monumental plaque "President of Ukraine" that flaunts at the entrance to the building. Convinced that it would be problematic to do this without the use of special means like termite, the "activists" simply spoiled it with yet another blasphemous inscriptions. In a word, we took a good walk ... The only timid attempt by the “law enforcement officers” to push this monkey house away from the walls of the “holy of holies” almost ended in failure for them - the radicals threw fires at the police and so they had to take their feet away from sin. Why did it happen?

It must be said that the first participants of the action, who began to "catch up" to the presidential administration in advance and in small groups, were let through by the police completely without hindrance, without any inspection. So, in principle, instead of relatively harmless firecrackers and firecrackers, they could bring something else - for example, combat grenades, which had already been used by the same “demonstrators” at the walls of the Ukrainian parliament. At the same time, the behavior of the police looks extremely strange, to say the least. It is clear that given the state of the “law enforcement agencies” to which they reached in the “nezalezhnoy” after the “Maidan”, with a completely ditched system of preventive work (including undercover work), they could simply not know about the impending pogrom. Although it is difficult to believe in such a thing - the security measures on Bankova Street in front of it were seemingly "strengthened". At least the number of police officers on duty there was increased from the usual two dozen to a hundred. However, firstly, for such a development of events, which followed very soon after the appearance of the first "activists" there, this number was clearly not enough, and, secondly, even these hundred policemen played in everything that was happening an unrespectable role of either spectators, or extras.

They did not react at all to numerous and egregious violations of the law, including such as the destruction of state property and open calls for physical reprisals against the head of state, whom they, in fact, were supposed to protect. Fireworks aimed at the roof of the presidential administration building would actually be perceived in any country as an attempt to set it on fire (which, in fact, they were). One gets the impression that the police stood with their tails between their legs, since they received the appropriate commands, which did not allow double interpretation. And only that same Avakov, whom the radicals exaggerated "the devil" and called to "kick out of the Ministry of Internal Affairs", could give them away.

Tellingly, one of Avakov's most odious deputies, Anton Gerashchenko, “glorified” for his ability to find “Kremlin agents” everywhere, right down to the dark corners under his own bed, subsequently began to talk about this utter absurdity. They say, “the protesters provoked the police to use force”, “trying to be beaten up,” and the “law enforcement officers”, smart girls, “did not succumb to the provocations” of these intriguing masochists. What nonsense, sorry ?! There are situations in which force must be used by the police beyond any doubt, by definition, so to speak. In the same "stronghold of world democracy" - the United States, a similar attack on the Congress building ended in shooting and killing demonstrators. And if the crowd went to storm the White House, the reaction would surely be much harsher.

In Kiev, the crowd of marginals, with their completely illegal and a priori unfulfillable (in a normal state) demands, were easily given to smash everything they wanted to smithereens and in half, and at the same time they did not even touch a finger. The will is yours, but the radicals could call Avakov anything and as much as they wanted, but without enlisting his support, they would not have ridden on Bankova for half an hour. And this suggests that everything that happened is not a "spontaneous action", but a very well-thought-out message to Zelensky, who has recently begun to pretend to be a kind of "tough leader", trying on dictatorial powers that are clearly unbearable for him. All his attempts to intercept the “patriotic” agenda from the nationalists through the adoption of anti-Russian decisions at the National Security and Defense Council, depicting a “fight against Moscow agents”, ended in nothing. This audience is waiting only for the command "face" and is ready to demolish a comedian who does not have any "power" support, literally at any moment.

To paraphrase a well-known quote from Babel, no one knows where Avakov's police end and nationalist attack aircraft begin. One thing is known for certain - its influence, and decisive, is present both there and there. Zelenskiy made this very clear once again on March 20. The raven, as you know, will not peck out a crow's eyes. Should this would-be leader do something else wrong, and his "power" will end in the blink of an eye. And here the problems that most directly concern our country begin. I wonder if the Kremlin understands that literally at any moment, instead of the Russophobic, hostile, but relatively sane and adhering to some framework of power, which is now in Kiev, a real fascist dictatorship can reign there - with all its classic manifestations and signs. From bookfires to concentration camps for Russians ... Zelenskiy, pitiful and helpless as he may be, will not issue the command to attack in Donbas without the direct and unequivocal support of Washington and London. For those who even condemn the current parody of the performance of "Minsk-2" as "zrada" and surrender, it will be a piece of cake. The regime that will emerge in Ukraine as a result of a radical coup (which, as everyone has seen, no one can prevent) cannot exist without war and without war.

It does not matter at all whether Avakov himself will lead the junta, or whether he will stand behind the back of the “Fuhrer” of the “leaders” of the nationalists - for example, the same Biletskiy. All this public will act in such a way that Russia will simply not be able not to intervene without losing face at the geopolitical level. When should our authorities be prepared for such a turn? Yesterday...
Ctrl Enter
Noticed oshЫbku Highlight text and press. Ctrl + Enter
We are
Who actually won the Cold War and what the future holds for the world
"We must beat first": the geopolitical alignment around Russia is continuously deteriorating
Reporterin Yandex News
Read Reporterin Google News
5 comments
Information
Dear reader, to leave comments on the publication, you must sign in.