Removal of nuclear bombs from Europe: what the Americans have in mind 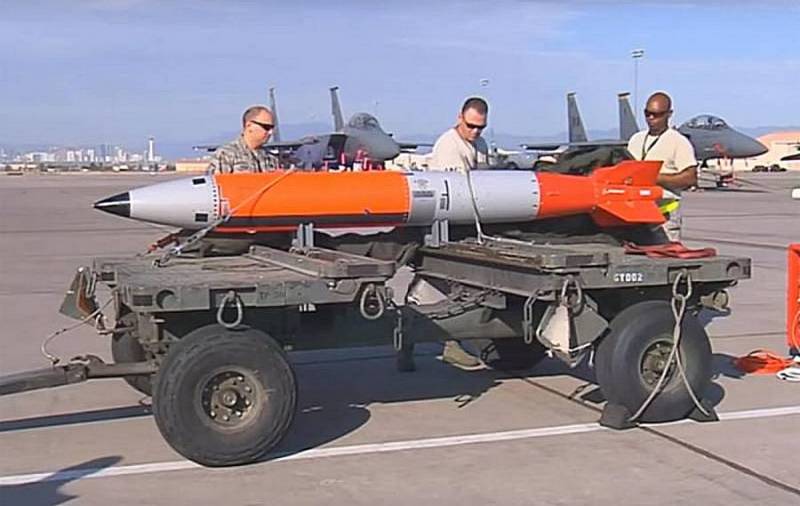 According to the Federation of American Scientists, the Pentagon secretly removed from five European countries 50 of the 61 B150 gravitational nuclear bombs stored there, reducing their arsenal by a third. Is this a victory for Russian diplomacy or, on the contrary, another step by Washington towards a "limited nuclear war"?


Recall that the United States is the only country that has actually used atomic weapons twice against Japanese cities. During the Cold War, nuclear weapons (NW) were the main deterrent and deterrent. It was believed that its destructive power and the assurance of an act of retaliation automatically made a nuclear war between two rival superpowers, the USSR and the United States, unthinkable. However, in recent years, the Pentagon has clearly again relied on the so-called "limited" nuclear war, in which low-yield nuclear weapons, more consistent with tactical nuclear weapons (TNW), will actually be used. For this, new low-power warheads were hastily developed for the Tridents, which had already taken up combat duty on American nuclear submarines, and now the turn of gravitational nuclear bombs in Europe has obviously come. Against whom they will be directed, it is not difficult to guess.

According to open sources, the United States has 150 B61-3 / -4 nuclear bombs deployed in Italy, Belgium, Turkey, Germany and the Netherlands. As carriers for them are considered strike fighters F-15E and multipurpose F-16C / D of the US Air Force, as well as aircraft of the European allies, which will receive bombs and access codes to them only in wartime. B61s are the oldest in the US nuclear arsenal, so the Pentagon announced a large-scale and expensive program to extend their life cycle, but in reality everything turned out to be somewhat different.

Instead, a modification of the B61-12 was created, which significantly changed the characteristics of a nuclear weapon. The mass of the bomb increased, and an inertial navigation system and controlled tail appeared in its tail section, which made it controlled and highly accurate. Tests have shown that the accuracy of hits has increased by 3,7-5,7 times, which greatly increases the damaging effect during detonation. Dropped from an airplane, the B61-12 will be able to glide over a considerable distance and hit the target with a deviation of no more than 30 meters, going deeper into the ground. The service life of the renewed nuclear weapon will be at least 20 years. Also, the United States has significantly expanded its fleet of possible carriers of the B61-12. Among the "strategists" these will be the proven B-2 Spirit bombers and the B-21 Raider coming to replace them. In tactical aviation, these are the already mentioned F-15E and F-16, as well as the fifth generation multirole fighters F-35. After nuclear certification, one Molniya will be able to take on board two B61-12s at once.

These are all very bad news for us and other opponents of the United States. The updated American aerial bomb, which has turned into a precision weapon based on stealth strategic bombers and fifth-generation multirole fighters, may become a great temptation to use it in a regional or local conflict. Washington deliberately and consistently lowers the threshold for the use of nuclear weapons. Undoubtedly, the Pentagon withdrew a third of its bombs from Europe not for disposal, but for their further modernization and replacement with new ammunition. Moreover, this was done behind the scenes, which is difficult to count as a victory for the Russian Foreign Ministry, whose representative Sergei Ryabkov anxiously declared:

This lowers what is called the threshold. And in fact, we are seeing the return of the concept of limited nuclear war. We believe that the US military doctrine took a step 50 years ago, when it was believed that, in principle, the use of nuclear weapons was an option for tactical war.
The Russian Defense Ministry will be forced to respond to such actions by the Pentagon by further militarizing the Kaliningrad region and Crimea, targeting American military infrastructure in Europe. Logic suggests that now Moscow too will have to seriously think about the possibility of waging a local nuclear war, betting on tactical weapons (TNW). Hypothetically, our Kaliningrad region, the main thorn in NATO's body, could be a theater of military operations. This exclave, in the event of the outbreak of hostilities, will be blocked by the North Atlantic Alliance from the air, sea and land, and a tactical nuclear strike may fall on Russian troops coming to its aid with the aim of unblocking.

Of course, all this is from the field of "extreme" options. Russia itself is a nuclear power with a full-fledged "triad". For the United States, there are goals and simpler ones, on which they can demonstrate to the whole world their status of the main "lawlessness". For example, a low-power tactical nuclear strike may well become the last argument in negotiations with Iran. Recall that the belligerent Japanese after this became the most loyal friends of the Americans.
Ctrl Enter
Noticed oshЫbku Highlight text and press. Ctrl + Enter
We are
Ukraine from the inside: traitors, curators and those who watch from the Kremlin
Ten "defeats" of Putin
Reporterin Yandex News
Read Reporterin Google News
12 comments
Information
Dear reader, to leave comments on the publication, you must sign in.