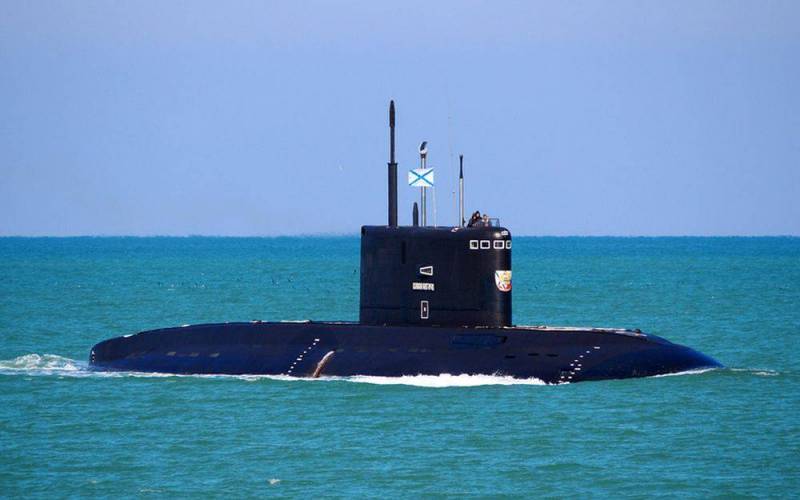 On the eve, on the Day of the submarine sailor, the naval base of the Russian Black Sea Fleet in Sevastopol was immediately abandoned by all the submarines located there. It is usually accepted that only a part of the submarines was on alert, while the rest remained at the base at this time, conducting a gradual rotation. What could be the reason for this action of the RF Ministry of Defense? Who did all the Russian submarine forces go to "hunt" at once?


According to the statement of Vice Admiral Osipov, the submarines are in the Black Sea, and one went to the Mediterranean, where it should replace the same type. We are talking about the project 636.3 Varshavyanka multipurpose diesel-electric submarines. This series is considered extremely successful due to the optimal combination of underwater speed, low noise and target detection range. This allows all such submarines to covertly approach a potential enemy and strike him with anti-ship missiles or Caliber cruise missiles. For acoustic secrecy, which makes it difficult to detect submarines, in the NATO bloc "Varshavyanka" was given the telling nickname "Black Hole". The Russian Black Sea Fleet has six submarines of this class. The seventh submarine diesel-electric submarine of project 877V "Halibut", B-871 "Alrosa", is currently under repair.

And so the command of the Russian Black Sea Fleet drove the entire submarine into the sea at once, as if it had to urgently repel a large-scale naval invasion. Indeed, the military activity of the North Atlantic Alliance and candidates for membership in this bloc in the Black Sea region is constantly increasing. Let's see what maneuvers were carried out there in just the first three months of 2021.

9 February The US Sixth Fleet, together with the Turkish Navy, "if I may say so," strengthened security in Europe. Our old acquaintances, the American destroyers Porter and Donald Cook, two Turkish frigates, two F-16 fighters and two reconnaissance aircraft, as well as the Poseidon anti-submarine patrol aircraft were involved in the exercise.

From February 27 to March 6, the Poseidon-21 multinational naval exercise took place in the Black Sea. They involved 13 ships from the United States, Turkey, France, Spain and Greece. Bulgaria was prevented from taking part in them by the coronavirus pandemic. Over seven hundred military personnel from all these countries took part in the exercise. Combat aviation was used: Rafale and Eurofighter Typhoon fighters, IAR 330 MEDEVAC and Puma Naval helicopters, and the Turks provided a remote-controlled underwater robot. What exactly did NATO practice: neutralizing certain underwater threats using hydrographic reconnaissance, detecting and neutralizing sea mines and other explosive devices, as well as fighting against aircraft, surface and submarine fleets of a simulated enemy, refueling ships on the water, towing damaged ships and providing medical assistance to the injured ... This is a scenario for a mini-war in the Black Sea basin. In parallel with this, on land, the Romanians processed joint actions in the event of an explosion of a certain hydraulic structure. I wonder which one?

Further, since the beginning of the year, Ukraine has already conducted the second exercise in cooperation with the NATO PASSEX bloc. Here is how the Ministry of Defense of Nezalezhnaya commented on them:

They practiced mine action training as part of a group of ships, transferring cargo on the move, repelling enemy air attack weapons, and conducting naval combat trainings.
And in the period from March 19 to March 29, fairly representative NATO maneuvers called Sea Shield 21 ("Sea Shield") will take place on the Black Sea. The USA, Turkey, Romania, Poland, Spain, Netherlands, Bulgaria and Greece will take part in them. In total, more than 2,4 thousand servicemen of the North Atlantic Alliance, 18 ships and 10 aircraft will be involved. The stated goal is to work out the interaction.

Against whom they were going to fight in the Black Sea basin all together, it is not difficult to guess. It is also easy to see that all the Varshavyanka went out to sea at once coincided with the start of the Sea Shield. As stated by the command of the Russian Black Sea Fleet, "all submarines perform different tasks." What kind of tasks can these be?

This is also understandable. Russian submarines will have to prove once again that they are not in vain called “Black Holes” for their unique low noise level for their class, and “hunt” the ships of the NATO bloc. The launching systems installed on them make it possible to launch Kalibr-PL cruise missiles from a submerged position, capable of destroying not only surface targets, but also underwater targets. A total of six multipurpose diesel-electric submarines could pose a lot of problems for the combined NATO fleet. If the means of anti-submarine warfare turn out to be powerless against the Varshavyanka, then the North Atlantic Alliance should think hard about whether it is ready to actually fight with Russia over the Black Sea.
Ctrl Enter
Noticed oshЫbku Highlight text and press. Ctrl + Enter
We are
"We must beat first": the geopolitical alignment around Russia is continuously deteriorating
Ten "defeats" of Putin
Reporterin Yandex News
Read Reporterin Google News
16 comments
Information
Dear reader, to leave comments on the publication, you must sign in.