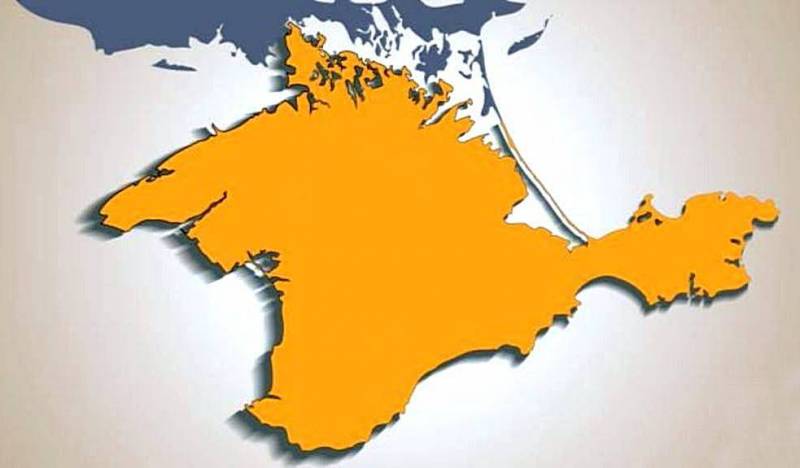 Ukraine is a land of wonders and paradoxes. In the rest of the world, the main task of professional diplomats is to strengthen good-neighborly relations with other countries, establish mutually beneficial contacts with them, and settle controversial issues. Nevertheless, representatives of the foreign ministry of the "nezalezhnoy" time after time manage not only to get involved in scandals and ridiculous situations, but also create them themselves with depressing regularity.


One of the "flagships" in this direction is Andriy Melnyk, representing the official Kiev in Germany. Not so long ago, he made another loud demarche, which could have very unpleasant consequences for Ukrainian-German relations. And, by and large, not only for them.

Passion for the "Crimean Platform"

The above-mentioned initiative has recently become one of the favorite "brainchilds" of not only the Ukrainian Foreign Ministry, but also the office of the country's president, from the depths of which it, in fact, "flew out". An inter-factional association of deputies with the same name has already been created in the “nezalezhnoy” parliament - the “people's deputies” included in it are also eager to participate in the “de-occupation” of the peninsula, for the sake of which everything is ultimately started. Let me remind you that for the first time Volodymyr Zelenskyy voiced the “platform” initiative during his visit to Turkey, without which, in his own words, “it is impossible to resolve a single issue in the Black Sea region”. Such a frank "deflection" was appreciated by Recep Erdogan, who, in a subsequent joint statement with his Ukrainian colleague, seemed to support the idea of ​​a "Crimean platform".

On this, by and large, the successes of Kiev in promoting a rather dubious project with a completely incomprehensible status and specific tasks, and ended. They were going to attract the USA, Canada, Britain, and, of course, the countries of the European Union. But among the latter, only Lithuania has so far announced its "ardent support" for the new undertaking. Another "Black Sea power" ... Well, these will even run to eat bleach - if someone tells them that the Russians will not like this. Something about "willingness to participate", it seems, mumbled Slovakia and Moldova. But this is not accurate yet, and, again, the "caliber" is not the same. Zelensky once argued that the head of EU diplomacy, Josep Borrell, almost sobbed on his chest from the feelings that flooded him when talking about the Crimean Platform. Yes, yes, "he promised to support and assist in every possible way" ... And - period. According to the first deputy head of the Ukrainian Foreign Ministry, Emine Djeppar, who is responsible for the new project, "the European Union is looking for a format for cooperation." But he can't find it yet. Probably rolled far ...

In fact, the states that really mean something in Europe are in no hurry to join Kiev's initiative for a number of very serious reasons. Firstly, here, of course, the clear and unambiguous position of Russia plays a role, very concretely voiced by the “voice” of the Russian Foreign Ministry, Maria Zakharova. According to her, the "Crimean Platform" is absolutely illegitimate and carries a "threat of aggression." And, consequently, the actions of any countries that have joined its work will be considered in Moscow not just "unfriendly", but directly "aimed at encroaching on the territorial integrity of Russia." They don't joke with such things - and in serious countries, unlike Lithuania, they understand this. Secondly, the same France, most likely, will in no case join the "format" where one of the main moving forces is Turkey with its neo-Ottoman manners. In Kiev, they either do not understand that Ankara has its own plans and views for Crimea, which have not yet been publicly announced, or they pretend that they do not understand. In Paris or Athens, for example, they are well aware of this, and therefore they will not even think of supporting any "platform". As for Germany, the first of the motives is more likely to prevail there. They have Nord Stream 2 on their minds, not Crimea.

It was this state of affairs that caused the utmost displeasure and a real outbreak of aggression on the part of the Ukrainian ambassador to this country. In his column for the German edition Berliner Zeitung, this "genius" of diplomacy said that "to put an end to the occupation of Crimea" is nothing less than a "moral duty of Germany"! So that's it. Where did the debt come from? Yes, everything is very simple - Pan Melnik recalled to Berlin "imperial colonialism" and "Nazi tyranny", which "left a bloody legacy in the Ukrainian Crimea." And he also quite pointedly stated that "the atrocities of that time" today "still need to be worked out." And these passages of the ambassador should be dealt with in detail.

We did not go through this ...

Generally speaking, the position of a career diplomat (and even a very high rank), as it were, by definition, implies that his bearer has, if not high intelligence, then at least a certain level of general erudition. And, even more so, knowledge of special subjects. Nevertheless, one gets the impression that neither history nor political geography in the "academies" that release Ukrainian ambassadors do not pass. Or they pass by such, without giving the listeners knowledge even within the scope of the high school curriculum. Andriy Melnik blames the Germans (on the pages of a German newspaper!) For the fact that they, it turns out, "occupied Crimea twice by military means during the last century." That is, I mean not only the Great Patriotic War, but also the introduction of German troops into the peninsula in 1918, which was carried out, by the way, in agreement with the then "non-foreign" government of Kiev - the Central Rada.

However, Melnyk undertakes to argue that the "pure colonialism" of the Germans, who "were running around with the ridiculous idea of ​​creating a separate state for their colonists in Crimea," did not allow the "unification of Ukraine with the Crimea" to come true back in 1918 ... "Must confess his historical responsibility to Ukraine" and he must do this through "decisive and courageous actions" aimed at "ending Putin's barbarism" and "pulling the peninsula out of his clutches." According to the ambassador's firm conviction, Germany should not supply Siemens turbines to Crimea (he also remembered this!), But “use all its political and economic tools "so that," joining forces with the new American government, with real transatlantic toughness to confront the Kremlin. " What do we see in front of us in this case? Yes, I agree - the purest psychiatry. However, we will continue the discussion, making the assumption that Ambassador Melnyk is sane (by the standards of Ukrainian diplomats, at least).

In this case, there is a blatant and gross violation of all canons, laws and rules of diplomatic ethics, no matter how many of them exist in our world. The diplomat publicly and in print allows himself not only to make sweeping accusations against the host country - he lectures her, puts forward ultimatum demands on her and tries to force her to do something. Moreover, at the same time, the truth and historical reliability are distorted by him in the most, that neither is, in a merciless way. What, pray tell, "historical debt" can Germany have to Ukraine "for Crimea" if during both periods of its German occupation the peninsula had nothing to do with Ukraine? Neither the parody of the state that existed in 1918, nor the Ukrainian SSR, which was part of the Soviet Union during the Great Patriotic War! In this case, only Russia has the right to make any claims, which is the official successor of the USSR and which Crimea was previously part of (except for a fairly short historical period), is now and will always be. No one denies the facts of Nazi atrocities on its territory, but they were happening in all the occupied lands of the USSR.

However, for Mr. Melnik, either because of his completely alternative giftedness, or because of the colossal gaps in education, there is no such thing as the Soviet Union at all. I remember that at one time he attacked Frank-Walter Steinmeier, the President of Germany, with completely hysterical claims for the fact that he "dared" to declare the inadmissibility of Berlin's confrontation with Moscow, recalling that this kind of mistake had already cost both countries colossal victims of the Great Patriotic War. war. Miller was enraged by the fact that Steinmeier, in his opinion, "repeats the narratives of Russian propaganda that only Russians suffered in that war" and not "repents before Ukraine." That the German leader spoke quite specifically about the "people of the USSR", undoubtedly referring to both Russians and Belarusians with Ukrainians, as well as representatives of other peoples who inhabited it, the would-be diplomat "did not hear at close range."

Steinmeier was (again, publicly and publicly) accused by him of "cynicism", "connivance with Moscow" and "absolute distortion of history." At the same time, the ambassador demanded to build "a separate memorial to the Ukrainian victims of Nazism." Yes, not just anywhere, but in Berlin ... For what reason after that Andrei Melnik did not fly out of Germany like a cork from a bottle, for me personally it is completely incomprehensible. Truly, the gloomy Teutonic genius is mysterious. By the way, I must say that this is far from the first such trick of a brawler diplomat. True, earlier he tried to "build" mainly German historians, teaching them how to "correctly" interpret the "Holodomor" and love Bandera. Obviously, having got a taste, Melnik decided to take on higher authorities. Really, I won't be surprised if the next time he doesn't like something, this figure will make a riot somewhere in the Bundestag, or even in the Chancellor's office.

Finally, one cannot but say the following: demanding from the Germans some kind of "repentance" and telling them about some kind of "duty for Nazi crimes", Ukraine continues to glorify Nazi accomplices and collaborators from among the "leaders" of its own nationalists during the Great Patriotic War. ... At the same time, Kiev, Lviv and other places do not want to hear any claims to this effect. So, when the Israeli Ambassador to Ukraine Joel Lyon protested against the assignment of the city stadium in Ternopil to the name of Roman Shukhevych, who is rightly considered a criminal both in Tel Aviv and in Warsaw, the Ukrainian Foreign Ministry responded in a completely boorish way. The ambassador was advised not to pry into other matters and "to improve relations between countries, and not spoil them." It is strange that Andrei Melnik does not receive such instructions from the headquarters of his department. Obviously, in Ukraine they believe that laws and regulations are written for diplomats exclusively from all other countries, and not their own.
Ctrl Enter
Noticed oshЫbku Highlight text and press. Ctrl + Enter
We are
"We must beat first": the geopolitical alignment around Russia is continuously deteriorating
Ten "defeats" of Putin
Reporterin Yandex News
Read Reporterin Google News
14 comments
Information
Dear reader, to leave comments on the publication, you must sign in.