Online duel with Putin: President Biden set himself up 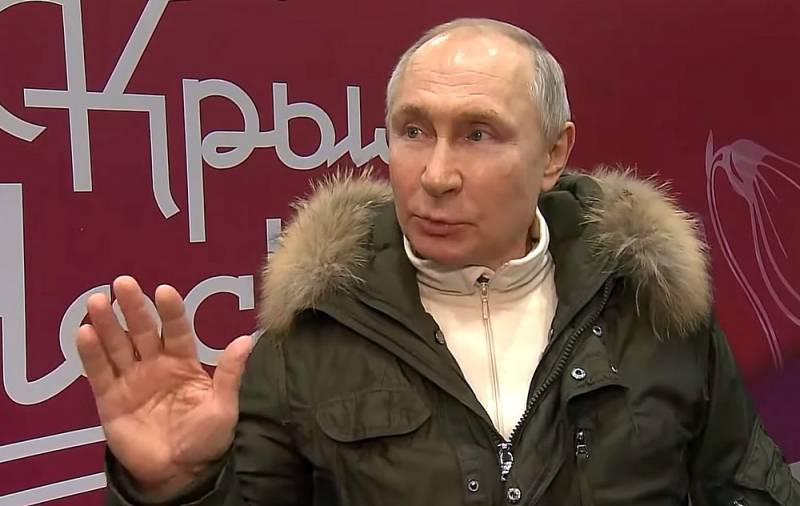 US President Joe Biden's harsh words about Vladimir Putin, what he said during an interview with a journalist of the American TV channel ABC News, they made a lot of noise not only in Russia. The entire world press writes about this. Moreover, the overwhelming majority of the media agreed that the head of the White House definitely went overboard in his assessments of the Russian leader.


Politicians, social activists, and ordinary citizens were waiting for only one thing - the reaction of the Kremlin. And not only the president's press secretary, who, by the way, made several vague statements on this matter, but also his boss, Vladimir Putin. However, I didn't have to wait long. The very next day after the publication of Joe Biden's interview, the Russian president, during an online meeting on the socio-economic development of Crimea and Sevastopol, successfully parried the rudeness of his American counterpart. I will not go into the details of his answer, it will be easier to see it with our own eyes.


However, the Kremlin chief decided not to stop there. After the grand opening of the concert in Luzhniki dedicated to the reunification of Crimea and the Russian Federation, the president made another, and much more interesting statement. Or rather a proposal. But what is really there - Vladimir Putin threw down a real challenge to Joe Biden. The Russian President invited his American counterpart to hold a public online discussion in order, as they say, to dot the i's. Something like this is happening for the first time in world practice, as, in fact, the accusation of the leader of a nuclear power in some kind of "murder".

Do you also see this sparkle and excitement in Putin's eyes? He seems to be ready to eat this "cherry on the cake"
It is more likely that Putin's challenge will be either ignored or rejected. The only question is how. Given the harsh words of Joe Biden, as well as the subsequent explanation of the White House press secretary Jen Psaki that her boss "regrets nothing" and "realizes what was said before," the US president has no choice but to declare - "I am not discussing with murderers!" Thus, the point will be put. In relations between Washington and Moscow, of course. The ambassador has already been recalled, and then diplomatic relations will be downgraded to the level of Charge d'Affaires.

The real reason for the likely refusal of the White House from an online duel with the Kremlin lies on the surface. Biden simply will not be able to answer clearly and clearly formulated questions of his Russian counterpart, which will be a universal shame for the American authorities. Not with regards to phantom interference in the US presidential elections in 2016 and 2020, not in the Nord Stream 2 issue, or in fact every month of tightening sanctions that are contrary to international law. There can be only one answer here: Russia is a geopolitical rival, an ideological enemy and a military rival of the United States. And Washington is ready to use any means to neutralize this rival. Of course, Biden is not ready to answer so directly.

Thus, Vladimir Putin puts Joe Biden and the United States in a very uncomfortable position. On the one hand, any awkward refusal will mean weakness and fear. On the other hand, a public discussion between the two leaders will obviously be a losing one for the American. Fork, comrades. Biden, unwillingly, set himself up. Let's see how Washington gets out of this situation.
Ctrl Enter
Noticed oshЫbku Highlight text and press. Ctrl + Enter
We are
Ukraine from the inside: traitors, curators and those who watch from the Kremlin
Ten "defeats" of Putin
Reporterin Yandex News
Read Reporterin Google News
39 comments
Information
Dear reader, to leave comments on the publication, you must sign in.