It is not yet war, but it is no longer peace. Russia responded with lightning speed to Biden's offensive demarche 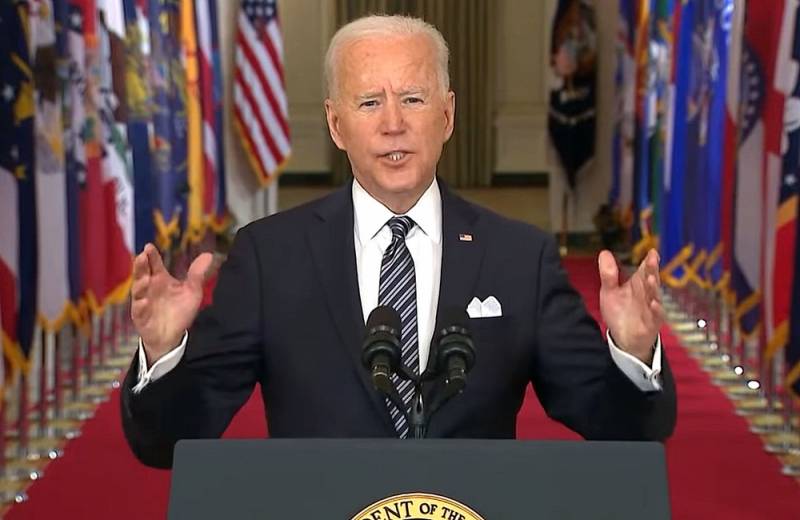 Moscow's lightning-fast and extremely harsh reaction to the provocative and offensive demarche of the President of the United States, Joe Biden, who made completely unacceptable statements and direct threats against the head of our state on television, cannot but rejoice. There are limits that no one should be allowed to cross - let alone the leaders of clearly unfriendly countries suffering from incurable megalomania, all the more so.


The recall of the Russian ambassador from Washington is more than a serious step by diplomatic standards. There are many examples of situations in history in which the declaration of war became the next stage of the conflict ... What is happening now and where can a new round of confrontation between the United States and Russia come?

The beginning of Biden's presidency was overshadowed by a seemingly insignificant, but very revealing incident. One of the shepherd dogs he brought to the White House, for no reason, no reason attacked an employee guarding the residence of the head of state of the US Secret Service. Has bitten fairly - judging by the fact that the scandal could not be "hush up". It should be noted that if it is not a fighting dog who behaves this way, in which aggression, including unmotivated, is often laid down at the genetic level, but a representative of a breed that is considered one of the smartest in the dog tribe, then this individual is either fantastically stupid or simply ill-mannered ... Most likely, in this case, there is a second option, since, according to Biden himself, the "hero" of this story, named Major, is now "undergoing a training course with professional dog handlers." In general, according to the president, he is a "cute dog" and "everyone loves him." Yes, maybe dear. Only brainless and in need of a good lesson.

It is not by chance that I began my material with this story - the associations, sorry, are too obvious. Thrown into the world from hundreds of thousands of “blue screens” and computer monitors, grave accusations and promises to make someone “pay” for non-existent “crimes” are the same completely unmotivated aggression, by committing which even a dog gets a reputation for being inadequate. What can we say about a person, especially the leader of a huge state ?! None of the representatives of the Russian authorities allowed themselves anything of the kind in relation to any of the leaders of the United States. Yes, the Kremlin has repeatedly stated about "the most serious disagreements" with Washington, including with its new administration, which have recently reached a "critical level" (according to the same Dmitry Peskov). However, at the same time, the boundaries of etiquette were never crossed, the framework of decency and common sense was not violated.

And you should not try to write off everything on the old age of the "speaker" and, possibly, associated irreversible changes in the psyche and mental abilities, which were repeatedly hinted at, or even directly pointed out political Biden's opponents during the election race. Nothing like this. This, alas, is just an abscess of all-American aggressive Russophobia that has broken through in front of the TV camera and has been brought to the last limit in recent years. Not so long ago (already this year), the world-famous sociological service Gallup conducted a study of how residents of the United States relate to representatives of various countries of the world. Not to political leaders, but to the most ordinary, ordinary citizens. So - according to the survey, 77% of respondents have negative feelings towards Russia and Russians in the United States! At the same time, 36% of them perceive our country as “extremely negative”. Simply put, they see her as a mortal enemy. And this is an absolute record since 1989, when a similar study of public opinion took place for the first time.

A purposeful and comprehensive campaign to demonize and denigrate our Motherland, launched from a certain point, has apparently reached the goals set by its initiators. And this is perhaps the most terrible thing. The Americans are morally ready to start killing us, any aggressive actions of Washington against Russia will be perceived by them, if not with enthusiasm, then with full approval. This is not yet a war in its full understanding, but it is definitely not peace, when the opponent is seen as a stranger, but a person. And Joe Biden is just “flesh of flesh” of this America, which has become extremely hostile to us, its main mouthpiece and voice of opinion. And, alas, a person who has the ability to make decisions, after which there may be no way back. His challenging speeches are the best proof of this.

Demons on the doorstep of Russia

Alas, Mr. President did not "blurt out too much" - this is confirmed by the fact that on the day of his provocative interview, the US Department of Commerce announced the expansion of anti-Russian sanctions imposed at one time "for the poisoning of the Skripals." We are talking about the complete suspension of those exceptions that were made regarding the export to our country of any defense and dual-use products. At the same time, American officials, of course, could not resist a hefty portion of moralizing and yet another unsubstantiated accusations of “the use of nerve agents against dissidents,” meaning, obviously, also the domestic “poisoner” Navalny. The fact that one of the most far-fetched and, moreover, already pretty mossy anti-Russian provocations was chosen as the reason for the new demarche, demonstrates, among other things, Washington's intentions to act according to the principle: "I turn what I want!" Nothing, however, new ... As already mentioned above, all echelons of the local political "establishment" are thoroughly imbued with frenzied Russophobia. The top military leadership, alas, too.

The declaration of our Motherland as no less than an "existential threat" to the very existence of the United States, as well as to its allies, as voiced by the head of the US European Command and NATO Supreme Commander in Europe, General Ted Walters, is no longer a "stream of consciousness »A senile who does not control himself. This is a position, and a position that its carriers are ready to reinforce with squadrons, aircraft carrier strike groups and megatons. Despite the statements made earlier by the same Joe Biden that he intends to authorize the "use of force in the international arena" exclusively "in the most extreme cases", the latest actions of the Pentagon show completely different intentions of the United States. To our great regret, we are talking about things that do not allow double interpretation, and lead to very specific fears.

Only recently have there been a number of reports from Europe about the redeployment of offensive weapons by the United States army directly to the borders of Russia, designed to deliver the "preemptive" and "disarming" strikes so beloved by American strategists. Thus, the Chief of Staff of the US Army, General James McConville announced the creation of a kind of "multidisciplinary task force", which, according to him, should include "hypersonic missiles, medium-range missiles and high-precision strike systems" capable of "ensuring accurate destruction of targets at long distances ". According to military experts, we are talking about the deployment of medium-range ballistic missiles by the Pentagon on the territory of Poland or Romania, and, most likely, in both of these countries. In the same Romania, as far as is known, the deployment of HIMARS tactical missile systems is already in full swing, and the Americans intend to place at least 54 launchers there, and not 18, as originally planned.

It should be remembered that in addition to standard ammunition, these complexes can also be equipped with the M57 operational-tactical missile (ATACMS), capable of hitting targets at a much greater distance. At the same time, no one even tries to hide the fact that the Romanian group HIMARS is aimed directly at the Crimea and the forces of the Russian army and the Navy based there. No less "inspiring" news is also a transfer to Poland in the framework of the NATO operation Atlantic Resolve of the aviation unit of the 1st Infantry Division of the US Army with the "premium" official name "Brigade of Demons". And this, unfortunately, is not a devil, but 50 attack helicopters UH-60 Black Hawk, 10 CH-47 Chinook and 25 AH-64 Apache. Why are these forces so urgently needed by the Americans on the western border of Russia?

And the recent publication in Forbes of boastful promises that soon the "invincible" American army, with the support of NATO allies, "will be able to destroy thousands of Russian and Chinese tanks, missiles and aircraft" looks quite outrageous. The publication advertises a certain "brilliant plan" Assault Breaker 2, which is, in fact, a reworked version of the moth-eaten "strategists" of the North Atlantic bloc during the Cold War. Then they dreamed of "one mighty blow" to sweep away from the face of the Earth and the USSR, and all the countries of the Warsaw Pact, but prudently did not even dare to try to realize their own fantasies. "Stealthy cruise missiles", "ultra-modern UAV killers", "superintelligent bombs like Golden Horde" ... All this, hoping in vain for an easy and quick victory, is again going to unleash on our cities a country whose president allows himself attacks against the president of Russia , thereby providing a justification for their own aggressive intentions and plans. At the same time, the US State Department makes equally defiant statements, proclaiming that "Washington intends to work with Russia solely in the name of advancing American interests and holding it accountable for its malicious actions." Outrageous arrogance and arrogance. At the same time, the State Department says that they "understand what the Russians are capable of." No, it seems that they just do not understand at all ... Therefore, they behave as if they were determined to break our country by force and bring it to its knees.

This is not a war yet, fortunately. However, talking about peaceful coexistence with the United States is hardly more appropriate. It is difficult to say what will happen next, but our countries have not been so close to a direct clash for a long time.
Ctrl Enter
Noticed oshЫbku Highlight text and press. Ctrl + Enter
We are
"We must beat first": the geopolitical alignment around Russia is continuously deteriorating
Ten "defeats" of Putin
Reporterin Yandex News
Read Reporterin Google News
50 comments
Information
Dear reader, to leave comments on the publication, you must sign in.