Early "transit": Putin began to prepare for the transfer of power? 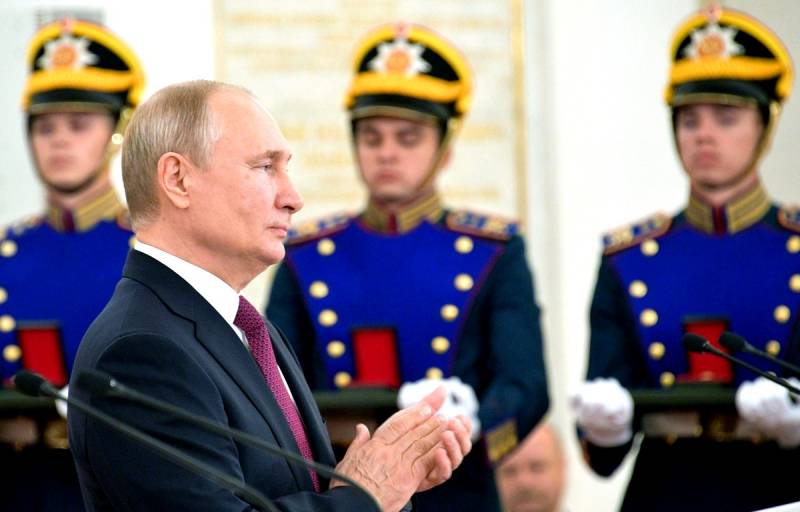 Until 2024, it is still quite a long way away, but some "markers" have already begun to appear in the higher echelons of the Russian government, which ill-wishers abroad considered as preparations for an early "transit". Who will be after Putin? Let's reflect on this topic.


First, let us briefly mention these very "markers", which may indicate the beginning of tectonic shifts in the Kremlin:

At first, at the end of October 2020, the President submitted to Parliament for consideration a bill that would give him and other former heads of state the right to become a senator for life in the Federation Council. This is how Pavel Krasheninnikov, head of the profile committee of the upper chamber, commented on it:

Former presidents of the Russian Federation will be able to enter the Federation Council for life - after the end of their term of office or after the early termination of office in case of resignation.
SecondlyAt the beginning of November last year, another curious bill was submitted to the State Duma, according to which the procedure for prosecuting former presidents is significantly complicated. The fact is that a special law "On guarantees to the President of the Russian Federation, who has terminated the exercise of his powers, and to members of his family" has already been in place since 2001, and it provides provisions on his immunity, as well as a special procedure for initiating criminal cases. In accordance with it, the initiator is the chairman of the Investigative Committee, however, in the new edition, this procedural figure simply disappears. Now the initiative in accusing the ex-president of committing a grave or especially grave crime must first be supported by at least a third of the State Duma deputies, then both the Supreme and Constitutional Courts must approve it, and only then the final decision will be made by the Federation Council. It also follows from the literal interpretation of the bill that the former head of state cannot be held criminally liable for actions committed by him after the end of his presidential term.

Thirdly, in the foreign press began to appear unverified information about the not the best state of health of 68-year-old Vladimir Putin. Presidential press secretary Dmitry Peskov strongly denied these insinuations, stating:

This is complete nonsense. The president is doing well. Excellent health.
However, it is difficult not to pay attention to how he carefully avoids approaching those who have not passed the required quarantine. In particular, the speaker of the Iranian parliament, Galibaf, who brought to Moscow the most important proposal for the Islamic Republic to join the EAEU, was unable to meet with President Putin because of the "special medical protocol established by the Kremlin." To do this, he was required to sit in quarantine for 15 days. Well, health is priceless, and it really needs to be protected in our difficult times.

Fourthly, the head of the Liberal Democratic Party Vladimir Zhirinovsky, who is sometimes called the unofficial "mouthpiece of the Kremlin", at the end of 2020 suddenly gave birth to a whole list of potential presidential contenders. It included: Mikhail Mishustin, Sergei Naryshkin, Dmitry Medvedev, Sergei Shoigu, Valentina Matvienko, Vyacheslav Volodin, Alexei Kudrin and even a certain Alexei Dyumin, whose name will hardly say anything to Russians who do not live in the Tula region.

At lastRecently, Kaliningrad Governor Anton Alikhanov spoke vaguely on the topic of a possible successor to Putin:

I think that there are many worthy sons of the Russian people. And there are people who are active creative people who love their Motherland and will work in its interests.
Indeed, our country is home to 146 million people. Among them there are many people who have reached the age of 35 and have been permanently residing in Russia over the past 10 years. But we will have to choose from those who are offered. There are several basic possible scenarios.

If foreign ill-wishers maliciously slander about the health of the head of state, he can take advantage of his "zeroing" in 2024 and go for another one or even two six-year terms. However, recent events in friendly Belarus and mass protests in Russia itself have shown that the people are a little tired of the irremovability of power, and people want political changes, linking with them the hope for socialeconomic improvements. It is possible that after the counting of the voting results, something similar to the Belarusian events will begin in our country, but in a much harsher form. The Democratic Party of the United States will not be alarmed with the Kremlin.

Taking into account such risks, it might be worth taking a less challenging path and carrying out another "reshuffle". Vladimir Putin could go to the State Council, at the same time becoming a senator for life, or even at the same time heading the Federation Council. A proven and non-conflict technocrat, like the current Prime Minister Mikhail Mishustin, would have replaced the head of state. This would keep the appearance of political changes in the country. Also, the option with the Federation Council and the State Council is quite working in case it suddenly turns out that the health of the 68-year-old president does not allow him to perform his difficult duties properly.
Ctrl Enter
Noticed oshЫbku Highlight text and press. Ctrl + Enter
We are
Ukraine from the inside: traitors, curators and those who watch from the Kremlin
Ten "defeats" of Putin
Reporterin Yandex News
Read Reporterin Google News
51 comment
Information
Dear reader, to leave comments on the publication, you must sign in.