The grin of a toothless lion: London overestimated the possibilities, declaring Moscow the # 1 enemy 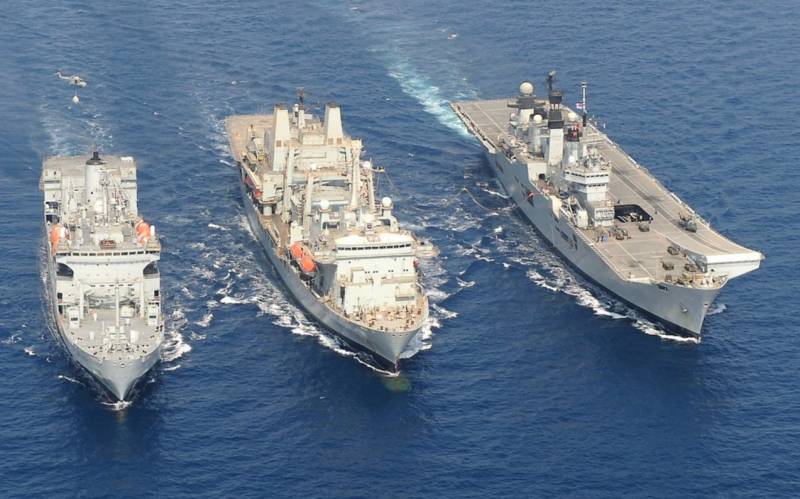 A comprehensive analytical review of security issues, external policy and a defense with a name truly worthy of a country acutely suffering from the phantom pains of its former imperial grandeur: Global Britain in a Competitive Age. Prime Minister Boris Johnson introduced him to the House of Commons of the British Parliament, essentially announcing not just significant changes, but steps aimed at dramatically changing the United Kingdom's strategic intentions in the military and foreign policy spheres.


Instead of reducing nuclear warheads, there is a sharp increase in their number, in fact, a new arms race with preparations for a conflict, for which specific dates have already been named. Well, and, of course, the "confirmation" of Russia in the official status of the main threat and irreconcilable enemy.

In principle, there is nothing extraordinary in the released document as such. This kind of reports London generates every decade. However, today's experts call it "the most profound and comprehensive since the end of the Cold War." In principle, the authors stretched out the main thing for as many as 114 pages - the clear intentions of Britain to return to the status of a "superpower" again. The pretty shabby lion was again drawn to "exploits" ... At the same time, the analysts' voluminous work clearly delineates priorities: China is presented in it as "the largest systemic challenge for economic security ”not only of Britain, but also of the entire Western world, which poses threats not only to its“ interests and values ​​”, but also to the“ global international order ”itself. Nevertheless, London intends to maintain at least the semblance of normal relations with Beijing, seeing in it the "main trading partner".

With Moscow - a completely different conversation. Russia is classified by the authors of the report (along with Iran and North Korea) among the "opportunist countries" which, by their "malicious" actions, "contribute to the weakening of security and a decrease in the level of stability in the world." In a word, if not an "empire of evil," then something very close to it. Our country is directly called "the most acute and direct threat to the UK at the present time." Directly a bayonet from the "three-line" ... And, you might think that at least once it was different. Well, perhaps in those days when Mikhail Gorbachev humbly bowed before Margaret Thatcher, who later graciously "brought to light" the highest echelons of Western power of this Judas and directed him towards the destruction of the USSR ... In all other times, Great Britain was consistent, the most insidious and dangerous enemy of Russia. It's just that this was not always announced openly. They beat, as a rule, surreptitiously and in the back ...

And now the report includes extremely hypocritical words that Britain, you see, "has a sincere respect for Russia, its history, culture and people." It turns out that London loves our country with almost all its soul, but with "her power" it is in the most, that neither is the most severe confrontation. It, this very power, is very bad, since it “actively defends the interests of Russia in neighboring countries” and clearly intends to do so in the future. According to London, the upholding of national interests is the prerogative of the "white Sahibs" only, and not everyone else ... Therefore, they intend to "restrain" our country. Moreover, “to prosecute” for violation of certain “norms and rules” developed and approved, of course, by representatives of the “higher” Anglo-Saxon “world community”.

In general, it is a common thing and it seems nothing new. However, under all these "ritual songs" the British government intends to push through a number of decisions that would mean a sharp militarization of the country. The most, perhaps, the most important among them is Johnson's announced intention not only to completely stop the ongoing process of reducing the British nuclear arsenal, but also to begin its significant build-up. According to London's plans declared in 2010, the number of atomic weapons that this country has at its disposal should have been reduced to 2030 by 180. Now, according to the Prime Minister's statement, this number, on the contrary, will be increased to 260 warheads, that is, by 40%. And here a very delicate question arises: how does this step compare with the START-3 Treaty, which was recently extended by Washington and Moscow? After all, the weapons of the US NATO allies are in no way taken into account in it. The United States, perhaps, will cut something, but only the British will increase the number of the same Tridents aimed at our country. Will we not stay like this, excuse me, in the fools?

Boris Johnson and the situation room

Generally speaking, Foggy Albion intends to rapidly increase its military potential not only in the field of nuclear weapons. Claiming that by 2030 "a nuclear, chemical or biological attack on Britain" will become a "real possibility" (and traditionally without giving any justification for such a prediction), the authors of the report call for "strengthening the defense capability." The government supports this call with all possible zeal and enthusiasm - in the next four years, it plans to allocate 80 billion pounds sterling (more than 111 billion dollars) for military needs. Over the next decade, this amount could be all 200 billion pounds (about 280 billion dollars). Just to modernize the military infrastructure, according to Boris Johnson, his cabinet intends to spend 24 billion pounds (about 33 billion dollars) in the very near future.

Also in the British army, the issue of updating the tank fleet is very acute. The report on the state of the country's armored forces, made not so long ago in the local parliament by the defense committee of his House of Commons, had a cold shower effect on the deputies. The authors of the document were forced to admit that in the event of a real clash with the Russian army, the "best in the world" (as they claim) soldiers of the United Kingdom will find "an inglorious death" without the slightest chance of victory. The main tank of the British army, the Challenger 2, is, according to the frank assessment of the committee members, a "hopelessly outdated machine" that has not undergone any upgrades or improvements since the late 90s of the last century. Moreover, the number of even these "oldies" in the army ranks has decreased sixfold over the past 30 years, and now amounts to less than 230 units ready for battle! There is nothing to fight with the Russians ...

The most interesting thing is that according to the plans of the British War Department, announced not so long ago, the number of tanks should have been reduced by another third. Also, to the number of 72.5 thousand people it was supposed to reduce the total number of personnel of the British army. The same Johnson announced, I remember, about the possible dismissal of 10 servicemen from its ranks. Honestly, the British sirs have a kind of split personality. On the one hand, they want to save on defense spending - and this is more than natural, given the drop in the UK economy by almost 3% in January alone. The country had to introduce a lockdown again due to the repeated outbreak of COVID-19. The recently concluded Brexit also does not contribute to its prosperity. Due to these reasons, the Bank of England predicts an economic decline of 4% at the end of the first quarter of 2021 and believes that this will not be the worst result. In light of all this, the above-mentioned spending on militarization in the amount of tens and hundreds of billions of pounds looks somehow not very realistic.

On the other hand, London is tempted to become a "superpower" again, albeit, as they say, "using soft power." However, it is not entirely clear how ballistic missiles, the number of which are going to be increased there, have to do with "soft power". However, so far, the British are making good headway in the realm of virtual rather than real wars. The same Boris Johnson is very proud of the creation at the end of last year of the National Cyber ​​Force, which, having settled in the north of England and "combining the entire potential of intelligence and defense services," are ready, in his words, "to conduct offensive cyber operations." Including - against the states hostile to Britain ”. Well, here we look above ...

Another of his undoubted achievements in the field of increasing the defense capability of the United Kingdom, the Prime Minister considers the creation in the government of "another body for the rapid response of all departments in a crisis situation - a kind of" situation room ". It is not entirely clear and it only causes associations with the work of J.K. Rowling, but it sounds solid: "Johnson and the Situation Room" ... continue to provide assistance to the countries of Eastern Europe in their confrontation with the Russian threat. " At the same time, Ukraine is especially mentioned - here the intention "to contribute to the development of its armed forces" is very concretely indicated. Again, quite a predictable decision - the "non-profit" lately has finally acquired the status of a colony in relation to Britain. Upon arrival in London, its president ran to the head of the ICU for instructions, and British warriors frolic on Ukrainian territory, arranging "landings in the underbelly of Russia", like their distant colonial ancestors somewhere in India or Africa.

Perhaps the main danger for Russia from the hostile policy that Britain had pursued against her for centuries was and lies precisely in the fact that the local gentlemen try to do all the dirty and most bloody affairs with someone else's hands, making the most of the controlled natives. This is especially true for the present day, when the British lion is definitely not in the best shape. Building up nuclear arsenals and building new frigates (at least that's what Johnson promised to parliament), the British will still try to send someone else to the slaughter. At least - in the forefront. They are going to revive "global Britain", of course, on the bones of others.

The primary task for us today is to make sure that there are no Russians among these bones.
Ctrl Enter
Noticed oshЫbku Highlight text and press. Ctrl + Enter
We are
"We must beat first": the geopolitical alignment around Russia is continuously deteriorating
Are serious problems for the Kremlin beneficial for the Anglo-Saxons?
Reporterin Yandex News
Read Reporterin Google News
12 comments
Information
Dear reader, to leave comments on the publication, you must sign in.