China's sandstorm of the decade threatens Russia: why is it happening 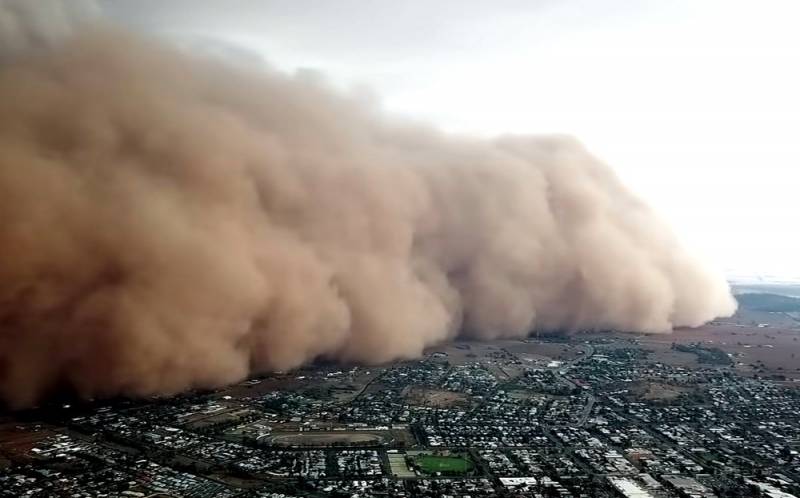 China has been covered by the sandstorm of the decade. Half of the country, including its capital Beijing, is now painted in all shades of yellow, very reminiscent of footage from the post-apocalyptic Blade Runner 2049. There are already dead the economy The Celestial Empire suffered serious damage. Forecasters argue whether this natural disaster will reach Russia. But if the truth comes, not today, then tomorrow, then what can we oppose?


Sand or dust storms are extremely dangerous natural phenomena. They are typical for the regions of North Africa, the Arabian Peninsula, Central Asia and China, and to a lesser extent for North America and Australia. As a rule, they are provoked by strong thunderstorms or cyclones, when strong winds lift huge amounts of dust and sand into the atmosphere and carry them over long distances, hundreds or even thousands of kilometers.

Such meteorological phenomena pose a serious danger to human health. Large particles carried by dust and sandstorms cause skin and eye irritation and conjunctivitis. Small particles are even more dangerous, as they enter the nose, mouth and upper respiratory tract and lead to asthma, tracheitis, allergic rhinitis, pneumonia, silicosis and cardiovascular disorders. It is estimated that in 2014 alone, the effects of exposure to dust particles caused the premature death of more than 400 thousand people due to cardiovascular diseases worldwide. In addition, some dangerous diseases are transmitted through the dust, which is noted in the regions of Africa, northern Mexico and the southern states of the United States. In other words, a sand or dust storm is a serious problem. Let's add to this their negative impact on the economy. This includes damage to agricultural plantings, and pollution of reservoirs and irrigation canals, and the forced cancellation of passenger flights, as well as damage to aircraft engines and cars by dust particles, and damage caused to the now popular solar power plants.

China has experienced all this to the fullest. Thirteen Chinese provinces, including Beijing, are covered with sand. The concentration of small particles in the air exceeds the maximum allowable 13 times in the capital of the country. Everything around has turned yellow due to microparticles of sand, which is now everywhere, including inside the lungs. Visibility dropped sharply, huge traffic jams formed on the roads, and over 160 flights were canceled. The only thing that saves a little is that all the Chinese are now armed with masks. Environmental Control Center expert Wang Xiaoyuan explained:

Wind currents from Mongolia mixed with our cold air and began to drive sand inland. Virtually the entire north of China was affected.
The most interesting thing is that in this gritty apocalypse there is a fair amount of China's own fault. The fact is that dust storms, ever increasing in power, are a direct consequence of the rapid economic development of the PRC. Each year, the area of ​​deserts in this country increases by about 1300 km². The vegetation cover is reduced due to active land use and livestock grazing, the soil loses its structure and resistance to erosion. At the same time, due to population growth and industrial production in China, the consumption of water resources has also increased: dams are being built, new artesian wells are being drilled. The result is a decrease in the level of groundwater and water flow in rivers. So, the famous Haunhe in the lower reaches now stands dry for six months. And this cannot be called a local problem of only one China. Dust storms from there finish off not only to neighboring Korea and Japan, but even to the United States. Now domestic forecasters are considering whether the Chinese "storm of the decade" will go to Russia.

With all this, it is impossible to say that Beijing is doing nothing to combat desertification, on the contrary. The Celestial Empire has been carrying out a program to create the Great Green Wall for several decades. By 2050, the Chinese intend to plant greenery in their country in an area roughly the size of Germany. Deforestation has been stopped (but, by the way, it has increased in Russia). Through the 13 most problematic provinces, a real wall of trees and shrubs is planted, more than 4500 km long and about 100 km wide. The planting of trees is stimulated at the legislative level: each Chinese must plant 3 to 5 seedlings per year or pay a tax to the treasury. At the same time, he is considered the owner of the trees he personally planted. Also on an industrial scale, sand dunes are torn down and leveled with the help of a special construction equipmentand the seeds are dropped onto the prepared area from planes.

In general, Beijing is pursuing a rather serious and ambitious program to green up its country. Planted forests should strengthen the soil to combat erosion, as well as prevent the formation of strong winds. And, despite all these measures taken, the deserts continue to advance, and the storms only intensify. This is an extremely disturbing trend. It is worth asking the question, how ready is our country for such a development of the situation? Our forests are being demolished on an industrial scale, largely in the interests of that very China. Millions of hectares of taiga are burned out every year. Rivers dry up. Last fall, a sandstorm hit the southern regions of Russia, the Rostov Region and the Stavropol Territory.

Maybe it's time for us to think about possible gloomy prospects and start doing something preemptively, without waiting for the problem to turn into a real ecological disaster? After all, the USSR once acted its own plan for transforming nature to create large forest belts in the steppe and forest-steppe regions to prevent droughts, dust and sand storms, and it gave excellent results. Unfortunately, after the death of its author, I.V. Stalin, this plan was curtailed, and many plantings were cut down.
Ctrl Enter
Noticed oshЫbku Highlight text and press. Ctrl + Enter
We are
“With Russians it’s worth playing fair or not playing at all”
Where is Russia going?
Reporterin Yandex News
Read Reporterin Google News
12 comments
Information
Dear reader, to leave comments on the publication, you must sign in.